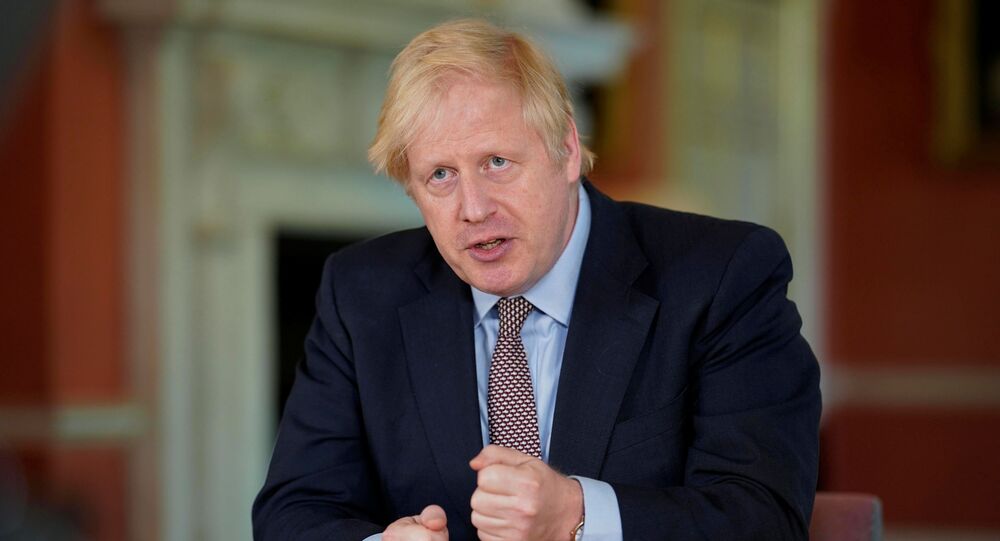 In a televised address to the nation on Sunday, UK Prime Minister Boris Johnson revealed his "conditional plan" to reopen British society, with five levels governing how quickly coronavirus lockdown restrictions could be eased.

Prime Minister Boris Johnson will be offering a more detailed insight into his roadmap for taking the UK out of COVID-19 lockdown on Monday, reports the BBC.

As the government publishes its 50-page official guidance for reopening society in Parliament, Johnson is scheduled to give a statement to Parliament at 15:30 BST.

Later, the UK Prime Minister is expected to speak to the public at a Downing Street briefing.

© AFP 2020 / Adrian Dennis
A family gather around the television to watch Britain's Prime Minister Boris Johnson give a televised message to the nation in Hartley Wintney, west of London on May 10, 2020, as the government sets out it's roadmap to ease the national lockdown due to the novel coronavirus COVID-19 pandemic.

Johnson is anticipated to shed more light on the government’s "conditional plan" to reopen society, and the five-level Covid-19 alert system, which he unveiled on Sunday in a televised address to the nation.

On 10 May, Johnson had announced a “first sketch” of how to ease the restrictions introduced in a bid to curb the spread of the novel respiratory disease, adding that he had consulted "across the political spectrum, across all four nations of the UK".

In line with the "general consensus on what we could do", Johnson suggested that lockdown measures would be “modified” in three "careful" steps which would last, tentatively, through July.

First, people in England would be allowed to spend more time outdoors from 13 May, in line with the plan, on outdoor exercise, outings in parks and for playing sports with household members.

Those who could not work from home, such as those in the manufacturing and construction industries, could return to their workplaces from Monday on the condition that they avoid public transport.

Two people from different households would also be allowed to meet in a park if they keep a distance of two metres between themselves, and trips to beaches in England would also be permissible under social distancing conditions.

According to Johnson, stage two might see a phased reopening of shops, with some primary pupils possibly allowed to return to school "at the earliest by 1 June".

No earlier than by 1 July, according to the government’s plan, the third step could see some hospitality businesses and other public places reopening "if the numbers support it".

Further details are expected, writes the BBC, on the government's announced plan that forthcoming UK coronavirus quarantine measures would be imposed on people arriving into the UK, with passengers from France exempt from the rules, as well arrivals from the Republic of Ireland.

Currently, no timeline for the measures has been announced.

The government is also expected to announce Monday that some elite athletes may begin an initial stage of restricted group training later in the week.

Boris Johnson emphasised that all the suggested easing measures were "conditional" on "big ifs", adding that he would "put on the brakes" if there is a rise in the rate of new outbreaks of the virus.

A new COVID-19 Alert System with five levels would influence the timescale of when and how the lockdown, first announced on 23 March, could be modified.

After the government’s strategy for easing a lockdown was unveiled, the UK Labour Party leader Sir Keir Starmer criticised it for lacking clarity and raising "as many questions as it answers".

In a letter to Business Secretary Alok Sharma, Labour's shadow business secretary Ed Miliband and shadow employment rights minister Andy McDonald voiced apprehensions, stressing they were "deeply concerned" about recommendations that those unable to work from home should go back to their workplaces.

© REUTERS / POOL
A staff member is pictured next to a banner at a COVID-19 testing centre amid the coronavirus disease outbreak, at Glasgow Airport, in Glasgow, Scotland April 29, 2020.

It was both "irresponsible and wrong", they claimed, to suggest staff return to work with 12 hours' notice, without offering clear guidance on how to stay safe while doing so.

Urging the government to address issues of safe social distancing in the workplace and mandatory COVID-19 risk assessments, they called for additional, clarified guidance to be published on the easing of lockdown restrictions.

In Scotland, Wales and Northern Ireland, which wield their own individual powers over lockdown procedures, ministers have rejected Downing Street’s "stay alert, control the virus, save lives" message, with Wales' health minister saying there had not been a "four-nations agreement" on the changes.

He added that “stay at home" recommendations remained in place in Wales.

Scottish First Minister Nicola Sturgeon likewise stressed the "stay at home" message would continue to be applied in Scotland, while the Northern Ireland Executive announced it would "consider its plan for a phased, strategic approach to recovery" at a meeting on Monday.

As the current statistics for the infection rate were cited as “far too great”, the National Education Union (NEU) lambasted the suggestion that some schools could reopen from 1 June as "nothing short of reckless".

The Trades Union Congress (TUC) general secretary Frances O'Grady deplored Johnson’s statement pertaining to the easing of restrictions as potentially generating "a lot of confusion and anxiety" among workers, and urged "clear direction" for staff to be laid out in "tough" new safety rules.

A further 269 people were reported to have died in the UK after testing positive for the coronavirus reported the outlet, with the overall death toll in the country now at 31,587, and the total number of confirmed cases of the respiratory disease standing at 215,264, according to the World Health Organisation’s situation report for 10 May.