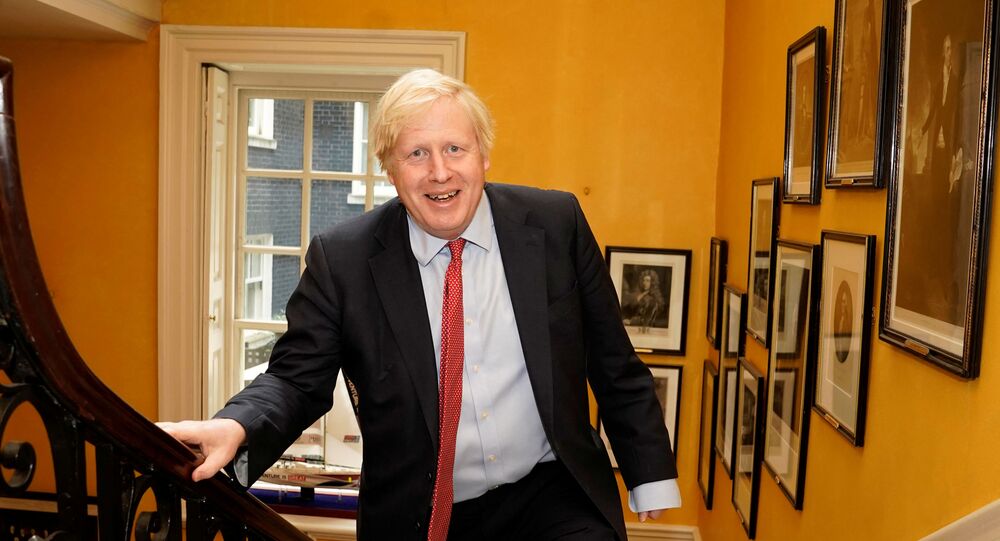 The British prime minister has promised to “fire up” the heavily burdened economy, however, it is now believed, with Germany’s example in mind, that the premature easing of coronavirus-related restrictions may carry quite a few perils.

As Prime Minister Boris Johnson is expected to set out his latest thoughts on social and economic restrictions on Thursday evening when he leads the daily Downing Street press conference for the first time this month, it has become increasingly clear that the PM, who has hitherto been in a personal fight with the coronavirus, is highly unlikely to end the lockdown some time soon, The Telegraph reported citing No. 10 sources.

“It will very much be in the area of how we satisfy our five tests for coming out of lockdown, chief among which is making sure we don't risk another exponential rise in infections", the edition quoted one unnamed No. 10 source as saying, and further adding:

“It's still too early to be setting out any details of what any easing of the lockdown might look like".

At the same time, Johnson, who the other day welcomed a baby boy into the world together with fiancee Carrie Symonds, is expected to hail the progress made by the NHS in keeping a tight rein on the virus.

A blueprint for what ministers call “phase two” of the lockdown started to take shape on Wednesday, with plans for schools, transport, and public gatherings becoming more distinct. However, it’s not yet clear when exactly the expected changes will occur.

According to a Whitehall source, the three-weekly review of lockdown measures, due on 7 May, would involve only modest changes, despite Johnson having last week vowed to “fire up” the economic “engines".

“We are looking at whether we can undo the top button and make things more comfortable in one or two places for the economy", the source added stressing that “any idea of a widespread lifting is plain wrong".

The government's Scientific Advisory Group for Emergencies will hand new evidence to ministers in the coming days, but it is expected to say easing many of the restrictions would irrevocably lead to spikes in the infection rate.

A government source said Mr Johnson will be "very clear that we will not do anything that might risk [this]… because then you are back with the virus spreading exponentially and the risk of a second lockdown".

For instance, referring to the potential opening of public places like schools, Deputy Chief Medical Officer Jonathan Van-Tam said a partial reopening of them was “in the mix”, as he put it, adding it was “premature” to expect early action given the difficulty of social distancing in them.

Meanwhile, Foreign Secretary Dominic Raab, who had deputised for Boris Johnson while he was in hospital earlier this month fighting COVID-19, pointed unambiguously to the perils of a premature lifting, citing the example of Germanty. The country, he said, despite having contained the virus commendably, has now witnessed a surge in transmission since opening back up.

“Chancellor Merkel has made it clear that they might need a second lockdown in Germany if the infection rate continues to rise", the UK foreign chief said at a Downing Street briefing admitting that the same reported uptick in the UK “is a very real risk".

Ministers are currently working out a series of workplace guidelines detailing restrictions that will apply when the lockdown is eventually eased.

Measures in the Making

The five biggest groups representing British businesses have been asked to send dossiers by Sunday night to Business Secretary Alok Sharma, setting out a roadmap for how different economic sectors could get back to work without breaking social distancing rules.

Gavin Williamson, the Education Secretary, drew up a phased return for schools, while Michael Gove, the Chancellor of the Duchy of Lancaster, suggested some public services would only reopen when there were sufficient amounts of personal protective equipment for staffers.

The news came after the UK's coronavirus death toll surged by 3,811 to 26,097 now that the government has started counting people who died in care homes or their own houses. The Department of Health has now for the first time included people dying outside of hospitals in its daily statistics, and the backdated numbers have caused the death toll to rise by the thousands.

Government sources noted that the figures were among the most thorough in the world for now, and that other countries might ultimately overtake Britain when they count all coronavirus deaths combined.

The number of deaths per million people in the UK is higher than the US, which has the highest overall death total in the world.