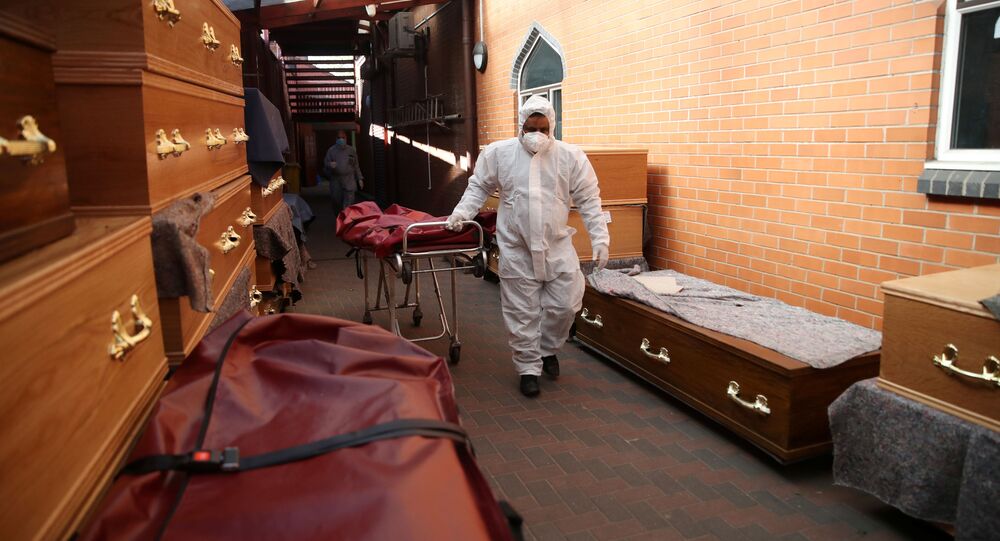 The government’s Coronavirus Act says inquests are not normally required in cases of suspected COVID-19 deaths. But the system of issuing death certificates and notifying coroners has not changed since it was exploited by serial killer Dr Harold Shipman and there are fears a handful of murders could be hidden among thousands of coronavirus deaths.

The Chief Coroner of England and Wales, Judge Mark Lucraft QC, published guidance earlier this month about inquests and the issuing of death certificates following the publication of the government’s Coronavirus Act.

The Chief Coroner’s guidance says: "Any registered medical practitioner can sign an MCCD, even if the deceased was not attended during their last illness and not seen after death, provided that they are able to state the cause of death to the best of their knowledge and belief."

Hundreds of people are believed to have died from suspected COVID-19 at home or in care homes without a doctor having examined them in person.

Last week Mike Padgham, Chair of the Independent Care Group, said there had been an estimated 4,000 coronavirus deaths in care homes alone and he said many GPs were certifying deaths via a video link without seeing the victims in person.

The conduct of the vast majority of relatives and carers has been beyond reproach but it is feared some may have seen the outbreak as an opportunity to dispose of burdensome parents or spouses.

System Struggling to Cope Amid Crisis

There have been almost 21,000 suspected COVID-19 deaths in hospitals in the UK and an unspecified number in care homes and at home and the NHS, GPs, coroners and the inquest system itself have been put under unprecedented pressure.

A spokesman for the Chief Coroner’s Office told Sputnik: "COVID-19 has been listed as a notifiable death under the Health Protection (Notification) Regulations 2010 which means it is notifiable to Public Health England. Where the coroner decides to open an inquest, section 30 of the Coronavirus Act 2020 removes the requirement for an inquest to be held with a jury if the coroner has reason to suspect death was caused by COVID-19."

© AFP 2021 / PAUL ELLIS
A coronavirus letter sent to all UK homes by the UK Government is pictured in Birkenhead, north west England on April 8, 2020 - Prime Minister Boris Johnson was "responding to treatment" as he spent a third day in intensive care on Wednesday battling the coronavirus, which has struck at the heart of the British government, infected more than 55,000 people across the country and killed nearly 6,200.

He said although COVID-19 was a notifiable disease that does not mean a report of death to a coroner is required and “there will often be no reason for deaths caused by this disease to be referred to a coroner”.

As for suspected deaths at home where the victim did not test positive for COVID-19 and was not seen by a medical professional prior to death, he said: "It would be for the relevant individual who certified the death to decide on cause of death. If they felt the death should be reported to a coroner, then the coroner would consider the circumstances surrounding the death."

Most Bodies Will be Cremated Without Autopsies

In the vast majority of suspected COVID-19 deaths there will be no autopsy or inquest and in many cases the bodies will be cremated.

Police forces up and down the country may struggle to find the time to investigate all the deaths at home but will be looking out for tell-tale signs of foul play - life insurance policies which have recently been taken out or increased, strange or suspicious behaviour from grieving relatives or evidence which undermines the claims of coronavius.

But in the absence of bodies which can be examined or exhumed it may be almost impossible for them to prove the virus was not the cause of death.

Detectives are thought to be on the lookout for people seeking to exploit the coronavirus crisis by bumping off elderly relatives or those with pre-existing health conditions in order to either cash in on life insurance policies or simply dispose of the burden of caring for them.

John Dixon, a retired police officer, said there was a danger that in a tiny minority of cases where deaths occurred at home a person could kill an elderly relative and pass it off as a coronavirus death.

Mr Dixon said: "But the danger is not limited to COVID-19. That’s why sudden deaths at home are vigorously investigated by police on behalf of the coroner in these cases. It would be the same with seasonal flu or a heatwave."

​What is unique with this coronavirus is that it is so infectious many patients are being diagnosed over the phone and are being advised to stay at home in an attempt not to overload the National Health Service.

Merry Varney, a human rights lawyer and expert on inquests, said it was "possible" the coronavirus outbreak could be used to disguise homicides.

Ms Varney told Sputnik: "COVID-19 is a natural cause of death so an inquest may not routinely be required, however natural deaths may be rendered unnatural by culpable human failure so it is not possible to say just because COVID-19 is the medical cause of death there will be no duty to hold an inquest. I can't say if it will be used as a cover-up. It is possible."

She said there could be something of a postcode lottery with the regional variance of approach among coroners.

"It is for each individual coroner to reach their own decisions about whether an inquest is needed based on the circumstances of a death and how it is conducted, and so both in terms of whether current inquests are adjourned, or whether particular circumstances give rise to a reasonable cause to suspect a death may be unnatural and hence an investigation is needed, will very much depend on the approach of the relevant coroner," Ms Varney told Sputnik.​

Following the conviction of serial killer Dr Harold Shipman, changes to the system of death certificates were recommended by a public inquiry 2005 but the government never enacted the reforms and, when Brexit came along, put them on the back burner.

Shipman, a general practitioner in Greater Manchester, falsified details on death certificates while murdering up to 250 patients between 1971 and 1998.

Shipman committed suicide in prison in 2004 after being jailed for life but a public inquiry into the case recommended sweeping changes to the law to close loopholes he had exploited.

As a family GP, Shipman was in a position to certify the cause of death and in most cases persuaded relatives of the victims there was no need for a post-mortem examination, which would have revealed the drugs he had injected in the patients when murdering them.

Johnson and Cummings. Do we have the political equivalent of Harold Shipman? I cannot think of a stronger argument for professional regulation of politicians. Like a political GMC. Assess knowledge and reasoning, appraisal and deregistration for unprofessional behaviour.

​Dame Janet said a new system was needed to "minimise the risk of the successful concealment of an unlawful death."

The inquiry proposed a system whereby "medical coroners" investigated all issues relating to the cause of death while the "judicial coroner" determines factual issues and disputes surrounding the death.

Doctors would have to report all unexpected deaths to the medical coroner and a new form of death certificate would include details of the deceased's recent medical history.

In 2010 Dame Janet Smith told the BBC she was disappointed at the lack of progress made on her recommendations, especially to the reform of death certificates.

She said: "We haven't moved at all on the basic death certification. It's exactly the same. There hasn't been any further work done since I moved off it in 2003."

Safeguards to protect against another serial killer GP like Harold Shipman won't be fully in place until 2021 - 15 years after Dame Janet Smith's inquiry recommended them https://t.co/jbnl1X25uB

In 2016 the government said it was planning to introduce reforms to the system in April 2018 but these were delayed as Theresa May’s government focused solely on trying to push through Brexit.

In April 2019 the Health Service Journal published an article which said the proposed creation of medical examiners had been further delayed.

Reporter Shaun Lintern wrote: "It has emerged that the DHSC and the NHSI are now pursuing a 'phased roll out' with all trusts expected to have a medical examiner overseeing acute deaths by 2020 and all deaths by 2021."

Ms Varney said: "The system is vulnerable given the very long delays in introducing the medical examiner system across the country and yes the risk remains, arguably heightened in current times, that true causes of death may be missed including those brought about by criminal acts or omissions (and indeed civil wrongs)."

The Department of Health and Social Care and the British Medical Association were both asked for comment but had not responded at the time of publication.