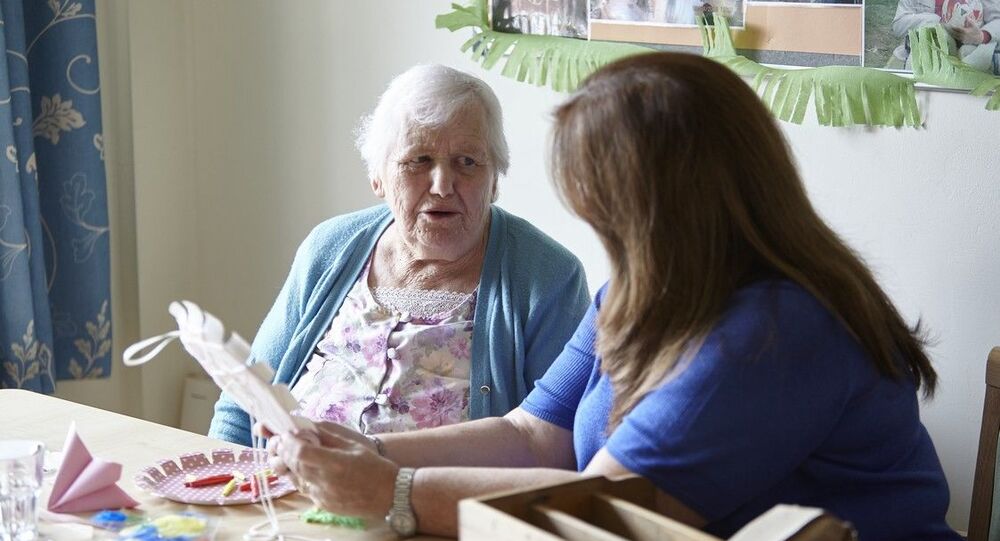 4,000 Dead Estimate in UK Care Homes Due to COVID-19 Will Prove To Be Accurate, Chair of ICG Says

The lag in the issuance of death certificates, along with the fact that some doctors are certifying deaths via video link, means that the government is almost certainly under counting COVID-19 caused deaths in care homes, a key care home representative tells Sputnik.

The figure of 4,000 deaths in UK care homes and nursing homes resulting from the coronavirus disease 2019 (COVID-19) was a rough estimate based on analysis of figures from the rest of Europe, Mike Padgham, Chair of Independent Care Group (ICG), has explained. While they "may or may not" end up being right, he did say he thinks the figures will ultimately prove to be accurate.

"It is based on an assessment by [the] Alzheimer's Society which said that European data revealed that around 40% of deaths from coronavirus had [come from] care and nursing homes", Padgham said, noting that his estimate was the product of a "back of a cigarette [pack]" calculation that he made as a "layman".

"If we apply that to our experience so far, then we can add 40% of the 12,000 deaths plus we have had – which comes to around 4,000. At the same time we have around 2,000 care and nursing homes [which the UK government says have experienced COVID-19 outbreaks] and so if you estimate that, on average, at least two people in each home have died from the virus, that again comes to around 4,000", he said.

There are an average of 40 - 60 residents in a care homes, according to Padgham.

He stressed that he was not a statistical expert nor a scientist but that he had a call from a Daily Mail reporter earlier in the week and "she was pressing me on whether I had any idea of what the figures were so, I gave her an idea of what I thought it was as me as a lay person based on my experience". Padgham, who himself runs four care homes and helps to represent other care providers in Yorkshire via the ICG, said that he believes that his estimates are correct, but that it will take time for the true figures to become known due to the lag in how deaths are being reported to begin with.

Until recently the only figures the UK government was providing of people dying from or with COVID-19 came from people who died while hospitalised with the virus.

When asked to comment on Padgham's estimate of 4,000 deaths in care and nursing homes due to the novel coronavirus the Department of Health and Social Care (DHSC) responded by saying:

"'We publish daily figures to reflect the number of deaths of patients who have tested positive for COVID-19 in hospital – this is the best way to reliably track the development of the coronavirus outbreak in the UK. These daily figures are now complemented by the ONS [Office of National Statistics] who are able to draw in data on deaths outside of hospital from death certificates. In an important step forward, ONS figures released today provide data on place of occurrence of death, and show that up to 3 April around 5% of deaths occurred in care homes."

Care Minister and Tory MP Helen Whatley was also asked by Good Morning Britain about Padgham's figures, but failed to respond as to their accuracy and instead laughed nervously in what has since become a widely shared video clip on social media.

According to the ONS there were 33 deaths in hospices, 136 deaths in private homes and 217 deaths in care homes which are linked to COIVD-19, as of 3 April.

Padgham explained the difference between the ONS figure and his estimate of 4,000 as a product of a number of factors including the time it takes for death certificates to be issued, which, he understands, could be as much as two weeks.

He pointed out that, "a lack of testing across homes", means that, "there is a lack of knowledge over what has caused the death of some residents at the moment and so there is a lag in true figures".

There are news reports of doctors certifying deaths via video link, Padgham noted, which could reduce the overall number of virus related deaths that would otherwise have been recorded.

He also added that there are reports of the disease not being put on death certificates altogether.

The Good Law Project, a not-for-profit which focuses on public interest cases, revealed on 16 April that at least one NHS hospital trust was issuing guidance telling hospital staff that they don't need to record COVID-19 on Medical Certificates of Cause of Death [MCCD].

According to the leaked document:

"Deaths from Covid 19 are natural deaths and as such, are not reportable to the Coroner.

Doctors are asked to use the standard MCCD [Medical Certificates of Cause of Death] form to certify death.

‘Pneumonia‘ or ‘community acquired pneumonia’ are acceptable at 1(a) on the MCCD.

There is no requirement to write Covid 19 as part of the MCCD. It may be mentioned at 1(b) on the form, should the doctor wish."

The guidance also says that, “it is not required that the body is examined as long as the body has been seen after death and an MCCD is completed”.

The Good Law Project has written to the NHS Trust - which remains unnamed - calling upon them to withdraw what they described as their "unlawful" guidance.

We have now written a formal pre action letter to the NHS Trust which is discouraging doctors from attributing deaths to Covid-19. We ask it to change its guidance and review all affected death certificates.
You can read our letter here. https://t.co/9S3dH6G1nX #goodlawproject

The NHS trust's guidance states that the procedures take account of advice from the National Medical Examiner and Chief Coroner of England, meaning other NHS trusts in the UK may well be issuing similar letters.

The DHSC has since said on Twitter that, “Covid-19 is an acceptable direct or underlying cause of death for the purposes of completing the Medical Certificate of Cause of Death.”

All of the above factors would go a long way in explaining the difference in the estimates provided by Padgham on the one hand and the confirmed deaths published by the DHSC, the ONS and Public Health England on the other.

Padgham did say that he welcomed the announcements made by Matt Hancock, Secretary of State for Health and Social Care, on 15 April.

• All care home residents coming back from hospital are to be tested before being admitted to the care home.
• Priority drops followed by a new online delivery system to supply care homes with PPE.
• Supermarkets asked to give the same priority treatment for carers as NHS.
• A recruitment drive for care staff with Government-funded induction training.

He said that these announcements have been "a long time coming" but that, "at last social care is getting the recognition it deserves".

Until now, he explained, "it has felt like social care was playing second fiddle to the NHS whilst in reality care workers and NHS are side by side in our fight to tackle Covid-19". Padgham emphasised that coronavirus testing and, "getting proper personal protective equipment (PPE) to our frontline staff has been a major issue for us so far".

"We all have to work together – as equals, with the same support – NHS, social care, local and national government – if we are going to defeat Covid-19", he concluded.

UK Care Minister Laughs When Asked Whether 4,000 People Have Died in Care Homes From COVID-19