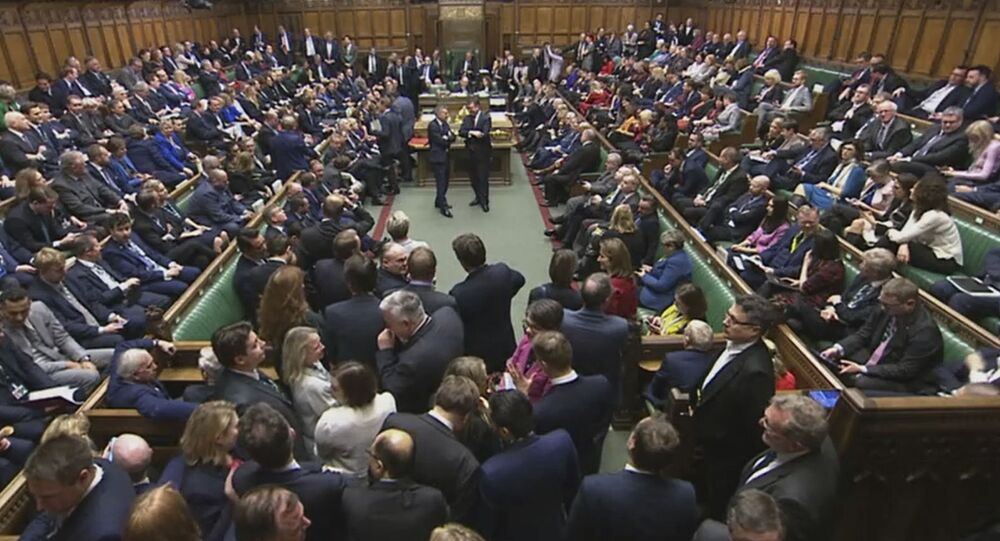 In a time of national emergency, it is not unprecedented that conventional politics is suspended to ensure unity and stability. Despite being in peace time, calls for the British Parliament to return to a war-footing are already being made.

On Tuesday Conservative Party MP George Freeman called for a cross-party national unity government to be established, asking Prime Minister Boris Johnson to reach out across the house and bring the opposition into a cabinet to help fight the coronavirus pandemic.

In a response to a tweet by Labour leadership candidate Keir Starmer welcoming funding announcements from the government, the MP for Mid Norfolk said once a "serious leader of the opposition" has been elected, the ruling Conservatives should reach out and include them in top government bodies.

This pandemic changes everything.

As the scale of the National Emergency deepens we will need much more cross-party leadership.

When we have a serious leader of the Opposition we should invite @Keir_Starmer to Covid COBRA, Cabinet & joint No10 briefings. https://t.co/gorIJykyw9

​He followed up with another tweet saying that the scale of the curtailing of freedoms, democracy, society, and economy warrants a 'CovidCoalition' National Government and that the idea was "unavoidable"

The level of curtailment of our freedoms, democracy, society & economy is going to demand a National Government-style CovidCoalition of all party leaders.

​This is not the first time Freeman has called for a unity government in the face of national difficulty. In March of last year he urged then Prime Minister Theresa May to bring in members of the opposition Labour Party to join into a Cabinet of National Unity to deliver Brexit.

​In both cases, Freeman explicitly left out the current leader of the Labour Party, Jeremy Corbyn from his unity government proposa. He has spoken more favourably of Labour MPs who have been critical of their leader.

The Fight Against COVID-19

The precedent for an all-party Government of National Unity comes from the Second World War, when Prime Minister Winston Churchill set up a 'war ministry' cabinet in 1940 with then Labour leader Clement Attlee as deputy in the run up to the Battle of Britain.

© AP Photo
Smiling Princess Elizabeth extends her hand in greeting to Winston Churchill, former British Prime Minister, at a dinner in London, on March 22, 1950 to mark the launching of the Lord Mayor's National Thanksgiving Fund

The UK is currently facing a national crisis as the coronavirus epidemic sweeps across the country, with 6,650 cases and 3,360 deaths being confirmed as of Monday.

Boris Johnson declared last Tuesday that the UK must act “like any wartime government” and the measures he has taken since do not indicate hyperbole.

Despite receiving criticism for delayed action, the PM has since shut schools, shops, and introduced restrictions on people leaving their homes after government advice did not lead to a sufficient reduction in "unnecessary social interaction".

In addition to the already extraordinary circumstance, the character of a national government becomes even more unpredictable as the parties begin to realign politically.

While the government and opposition have been united in their support of the advice from medical experts to avoid social interaction, political sparring has continued over the financial response to the outbreak.

In response to Conservative Chancellor Rishi Sunak announcing an "unprecedented" stimulus package to boost business' strained by the ongoing crisis, the Labour Party leadership demanded sick pay be included and that workers and the self-employed be assured income while in government-advised isolation.

Labour have also criticised the government over its decision to rent beds from the private sector as opposed to bringing them under the control of the NHS.

Aside from large-scale investments in public infrastructure however, Conservative government has also shifted towards 'war-time' commanding of the economy, introducing similar policies to those which the Labour Party ran on in 2019 general election.

The Government urgently needs to come up with a plan to support self-employed workers. pic.twitter.com/athGLpMXdA

​On Monday, the Department for Transport (DfT) announced that it would be suspending the rail franchise network, effectively allowing the government to cover the running costs of trains and to continue operating for "essential" workers and travel as services are reduced.

These moves from the new chancellor and the DfT indicate at the very least an open mind to state intervention when it comes to dealing with disruption.

On the Labour side, Keir Starmer, who is the favourite to succeed Corbyn, is simultaneously standing as a "unity candidate" and pledging to continue the veteran socialists anti-austerity policies if he wins the leadership race.

If a Government of National Unity were to emerge, it is possible that both parties would find themselves in the unexpected situation of pushing in the same direction.