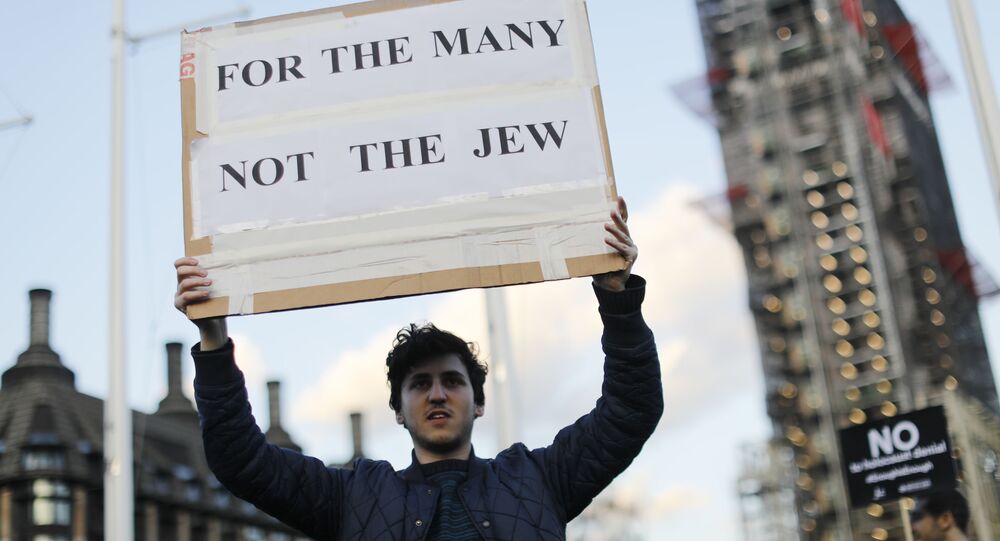 Jeremy Corbyn’s campaign leading up to the December general election was plagued by accusations of anti-Semitism, relating both to Corbyn himself and his alleged tolerance for the sentiment within party ranks.

An Irish lawmaker has been forced to back down on comments that Israel used its espionage service, the Mossad, to bring down Labour leader Jeremy Corbyn.

The Sunday Times has unearthed several tweets by Reada Cronin, a newly-elected member of the lower chamber of Ireland’s parliament, which accuse Mossad of interfering in the UK general election.

She reportedly tweeted on 30 November: “Mossad. Interference. In. The. British. Election. Brits. Being. Led. By. The. Nose.”

According to The Times, she wrote in another tweet on 12 December that “Mossad have involved themselves in dirty tricks in elections not too far away”. Both tweets have been deleted.

The following day, she replied to one user who dismissed that assertion: “When the Nazis come back and they are on the march it’ll be Jeremy Corbyn [that] will stand with you. You are a disgrace to your forefathers.”

When the nazis come back, and they're on the march, it'll be Jeremy Corbyn will stand with you. You are a disgrace to your forefathers

After exit polls predicted Corbyn’s defeat, she wrote: “So sorry for Jeremy Corbyn. A decent, principled man done down by lies, deceit, fake news and the sinister activities of Mossad Secret Service.” According to The Times, she added that Mossad’s “interference” was “blatant as f***”. That tweet is not available either.

The Israeli Embassy in the Republic of Ireland accused Cronin of promulgating “paranoid, hate-driven conspiracy theories”, and the UK-based Campaign Against Anti-Semitism called her unfit for office.

Cronin, 46, had sat on the Kildare County Council between 2014 and 2019, before being elected to parliament in the general election this week. She represents Sinn Fein, the left-wing political party that won the popular vote and 37 seats in the 160-seat parliament, just one less than the country’s largest party, Fianna Fail.

She described her claims as “throwaway remarks”, while her party distanced itself from the lawmaker. “I understand these were throwaway remarks,” a party spokesman said in a statement. “They do not represent the views of Sinn Fein.”

Why was Israel brought up?

Jeremy Corbyn had pledged to recognise the Palestinian state if he was elected and has accused Israel of oppressing Palestinians. He has also opposed Israeli claims on Palestinian lands and promised to stop arms sales to Israel.

Both political elites and campaigners have accused Corbyn of anti-Semitism over his take on Israel, something he denied. It has also been claimed that the Labour leader was active in pro-Palestinian Facebook groups, which he admitted (although he maintained he had seen no anti-Semitic rhetoric there).

In 2018, when the Labour was adopting a new code of conduct, Corbyn sought to incorporate a definition of anti-Semitism that would allow party members to “treat Israel like any other state or assess its conduct against the standards of international law.”

According to his plan, “nor should it be regarded as anti-Semitic to describe Israel, its policies or the circumstances around its foundation as racist because of their discriminatory impact, or to support another settlement of the Israel-Palestine conflict”.

Proponents of that definition – which didn’t include the full wording of the International Holocaust Remembrance Alliance – cited their right to free speech, but an intra-Labour row ensued over whether the party should stick to the full IHRA definition. Eventually, the Labour’s ruling body adopted the latter wording and rejected Corbyn’s.

Allegations of anti-Semitism resurfaced in the weeks leading up to the December general election, when Corbyn still had a realistic chance of beating Boris Johnson. Jewish campaigners and groups, including the Jewish Labour Movement and Britain’s chief rabbi, accused the 70-year-old politician of his perceived inaction on anti-Semites within his own party ranks, which he denied.

Last month, a Labour-linked group suggested in a report that “the row about anti-Semitism has been stoked by the government of Israel and Its helpers in the UK”.

They argued that the Israeli government had secretly meddled in British politics to “prevent the election of a Labour government that will recognise a Palestinian state”.

And just days prior, a video emerged of a Jewish volunteer for Campaign Against Anti-Semitism, who thanked everyone who helped defeat Corbyn.

“Maccabees, we did it,” he jubilated. “By word and deed, by protest and tweet, by our spies and intel.”

He added, however, that his allies were “not secret Mossad spies, they’re just ordinary people.”