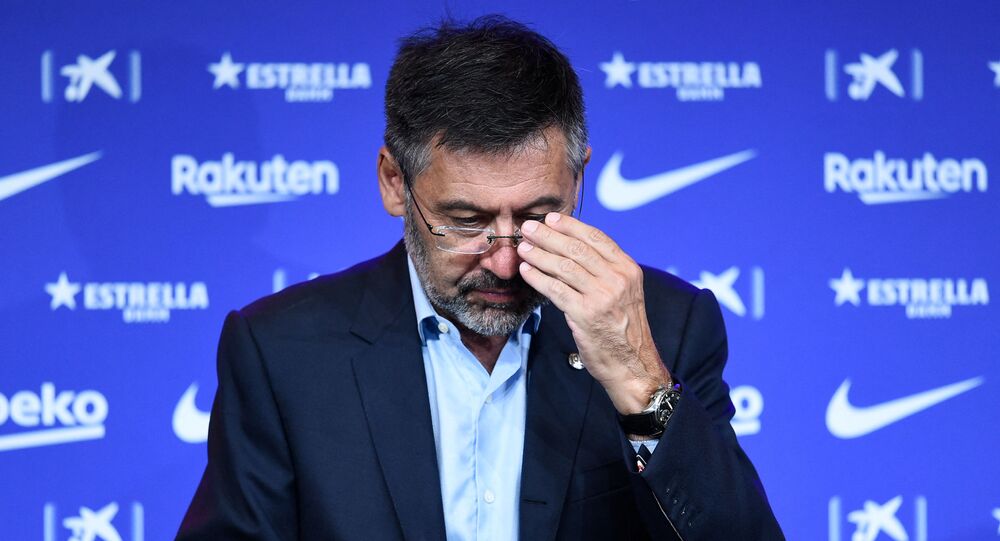 Bartomeu was arrested earlier in the day as a result of a police raid that took place at the club's headquarters. Barcelona FC's former management reportedly initiated a campaign in February 2020 to defame people criticizing Bartomeu and other top officials.

Former president of Spanish football club Barcelona, ​​Josep Maria Bartomeu, will spend the night in jail at a police station along with his advisor Jaume Masferrer, the Sport.es website reported.

According to the report, former Barcelona CEO Oscar Grau, lawyer Roman Gomez Ponti and former Bartomeu administration head Jaume Masferrer were detained together with Bartomeu. Although Grau and Ponti were subsequently released from custody later, Masferrer and Bartomeu will remain at the station before appearing in court on Tuesday.

The police of the Catalonia region, the Mossos d'Esquadra, issued a statement on Monday that the arrests were part of "an investigation into alleged crimes related to property and the socio-economic order" that has "been going on for almost a year".

In relation to this morning’s operation in Barcelona:

There were 5 entries and 4 arrests. The investigation remains open pic.twitter.com/2YV0Ka3qqK

​The football club issued a statement confirming the searches at its properties were related to last year's investigation into Barcagate.

"FC Barcelona express its utmost respect for the judicial process in place and for the principle of presumed innocence for the people affected within the remit of this investigation", the statement added.

According to reports, Bartomeu was involved in specific transactions on behalf of the club in order to obtain personal profit. In early 2020, the club's management reportedly hired specialists to assess the reputation of the president and other leaders of the club, as well as to defame a number of current and former players through social networks. The company's actions led to the resignation of a number of executives in connection with accusations against them.

Bartomeu has been previously blamed for Barca's deteriorating finances and poor results last season. He was also blasted by Messi, who sought a transfer in July but failed to obtain it. The Argentine then accused Bartomeu of lying to him, adding that "there has been no project or anything for a long time" in the club.

Last month, following the leak of Messi's contract with the club, revealing his enormous pay, speculation arose that the source of the leakage of confidential information could be Bartolomeu himself. The former Barca president strongly denied such allegations, adding that Messi "deserves what he earns both for professional and commercial reasons".

Bartomeu stepped down as president of Barcelona in October 2020. The new presidential elections will be held on March 7. The candidates are Joan Laporta, Anthony Freix and Victor Font.

Bartomeu is the third Barcelona president in the club's history to be prosecuted for financial crimes and misconduct. The other top managers of the club who have previously been investigated are Josep Nunez, who ran the club from 1978 to 2000 and was convicted of bribery related to his real estate business in 2011, and Sandro Rosell, who led the club from 2010 to 2014, and was accused of money laundering, but subsequently acquitted by the National Court.

Messi Not Motivated by Money, More Open to Staying in Barcelona, Report Says