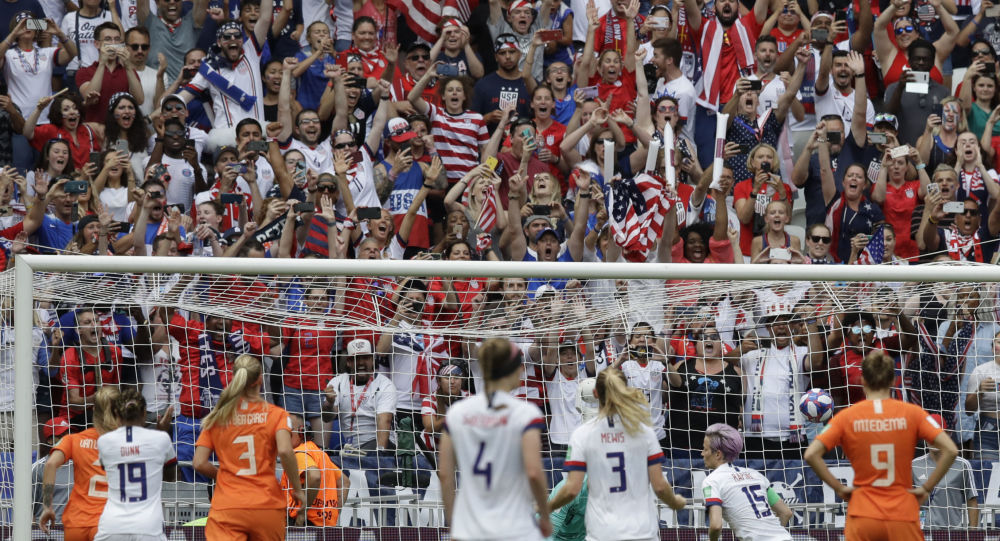 Along with the general controversy prompted by the US captain’s behaviour during the national anthem played prior to the games, the confident celebrations by Team America couldn’t help ending up in the crosshairs of the unhappy European fans, either.

Although the US seems to have had quite a tangible reason to celebrate yesterday after the women’s team gritted out a 2-0 victory against the Netherlands in the Women’s World Cup, the scale of Sunday’s revelry in Lyon, France, has drawn a great deal of criticism.

“We're crazy. That’s what makes us special”, team captain Megan Rapinoe said after the US won its second consecutive World Cup title, and fourth overall, with the choice of words fully corresponding to the ecstatic, booze-dominated nature of the celebrations.

Videos and pictures that kept emerging all through the night, show Team US gleefully marking the historic night right in the locker room, before changing clothes and moving elsewhere to continue. The players were first seen jumping around the stadium premises spraying each other with bottles of champagne, which even prompted some of them to wear ski masks to keep the booze out of their eyes.

Barely any time passed before @kelleymohara was concussed and continued to celebrate in the best way possible #champ pic.twitter.com/sOwRB3tbVp

US women’s soccer team with the super litty (& unseasoned) celebration after the win 🙌🏽 pic.twitter.com/9qBzA4CMy5

In a set of pictures, Captain Megan Rapinoe can be seen drinking from a champagne bottle poured by someone nearby, while others ecstatically danced around, with medal-wearing Kelley O’Hara jumping up on the table to twerk and revel in the win.

The party culminated in Rapinoe climbing on top of a table to spray fans and teammates with champagne, as Goalkeeper Ashlyn Harris could be heard yelling “You know we came to mother-f***ing party”.

The team’s confidence was indeed unshaken throughout the match, led by Rapinoe, a long-time vet and the second American woman to win the prestigious Golden Boot award for scoring the most goals (6) in the least amount of time on the field. However, the team’s general assertiveness, proved among other things by a brilliant penalty shot and an accurate free kick, was seen by many across the world as a demonstration of arrogance, with many finding fault with the US’ grand-style partying.

The US women's soccer team is a lot like Trump. Insanely arrogant, horrible obnoxious personalities, and yet you can't stop them from rolling over the competition.

“Rapinoe ruined it for me with her arrogance towards Sari, sorry. Why do Americans always have to go the arrogance route? This is why the world sees you as arrogant - because you are”, one user wrote while another weighed in arguing a little humility “wouldn’t hurt”.

Rapinoe ruined it for me with her arrogance towards Sari, sorry.

Why do Americans always have to go the arrogance route? This is why the world sees you as arrogant - because you are.

“If it was literally any other country I could accept losing, but I can't stand the thought of those smug arrogant Americans winning”, another unimpressed Dutch fan posted...

... prompting some to strike back arguing there is nothing wrong in the Americans’ winning mentality:

“The American women are brash, confident, some would say 'arrogant' but they have an indomitable winning mentality and jeezo can they back up the banter”, one commented.

Others posted along the same lines:

Another example of a misogynistic society! Criticism of the Women’s US soccer team’s celebrations as “smug & arrogant” I say party till those champagne bubbles lift you off your feet & ignore the criticism. You reign!

When you can back up your ego, you are not arrogant.
Just self assured. And she brings so much attention and pride to the US she should benefit financially , more so than the men's soccer team. I cannot even name a male player. https://t.co/8xjkRrxtGe

Along with Rapinoe, who drew a great deal of controversy by refusing to sing the national anthem before games after previously kneeling in protest in 2016, US women's team staffers also triggered questions, when they were spotted scoping Team England’s hotel. England-born US coach Jill Ellis insisted it indicated good preparation rather than arrogance, because the Americans were considering using that hotel if they moved on to the final.