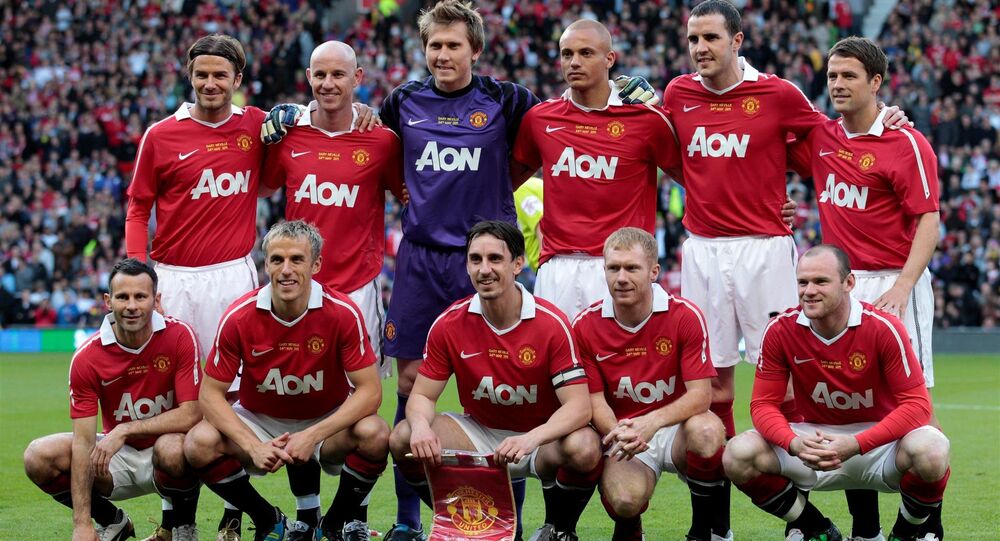 The new football season kicks off in the UK this weekend but one little team have been kicking up a big fuss by splashing the cash and upsetting their rivals. Sputnik spoke to Nathan Youd, a fan of Salford City, who are jointly owned by several former Manchester United legends.

Salford City were taken over in 2014 by a consortium which includes ex-Manchester United footballers Ryan Giggs, Gary Neville, Paul Scholes and Phil Neville.

They are now in the fifth tier of English football but the club have big ambitions.

This summer they have recruited a former football league manager, Graham Alexander, and have signed a number of players from higher divisions on very generous wages.

Nathan Youd, 24, was born and raised in Salford but has only been supporting the team for four years.

“I didn’t really follow them before the takeover but I had an eye on the results. The owners get some flak by those who say this is a toy club for them to play with at their leisure but I think this is different. They have taken over a club they have an affinity with, all having grown up in the local area, and they have done much, much more than just spend big bucks on players. They are developing a club at the heart of a community that has a lot of negative connotations. I can’t see this being a venture that they get bored of or pull out of like some fans especially. Gary Neville especially is a businessman now and I think he and the others are in this for the long haul,” Mr. Youd told Sputnik.

Eyebrows were raised when they signed Irish striker Adam Rooney from Scottish Premier League club Aberdeen on a reported deal of £4,000 a week, wages which are unheard of at that level of football.

Mr. Youd said he was very excited about the season, which starts on Saturday, August 4, with a home match against Leyton Orient.

“I’m a little concerned it might take us some time to get the team gelled. I’m looking forward to taking on some established clubs and mixing with the big boys – the Chesterfields and Barnets. The players and manager signed showed the ambition of the owners. Do I think some were swayed by the money? Yes, highly likely. But you can’t argue that this an attractive proposition for players such as Rooney and (midfielder Danny) Lloyd,” Mr. Youd told Sputnik.

© REUTERS / Action Images via Reuters / Alex Morton Livepic
Man Utd Fans Mad at Mourinho for Club's Poor Game Ahead of New Season
Many other clubs are jealous of the owners’ wealth and Gary Neville has already been involved in Twitter spats with the manager of Motherwell – who were outbid for Rooney – and the chairman of Accrington Stanley, Andy Holt.

“It’s laughable, really. The beauty of the football pyramid is that it’s by no means a closed shop. The comment from the Accrington Stanley was the best – ‘Salford are buying their way into the football league’. What a stupid comment. You win promotions on merit and for us to be promoted we will need to be the best team across 46 games in a very competitive division. It doesn't guarantee promotion. York City had a similar budget to Salford last year and absolutely bombed. The same could easily happen to us this season. If we were promoted, It would be deserved and earned on the football pitch, not bought in the boardroom. There is an envy and a fear, especially among some smaller clubs in League One and League Two such as Stanley, who have a small supporter base and less glamour about them — as they now have to look over their shoulder,” Mr. Youd told Sputnik.

He said the sky was the limit for Salford City.

“Crowds went up last year to around 1,400 compared to a couple of hundred before the takeover and it shows the speed of growth. The area surrounding the stadium is not fit for purpose for a club which wants to get into League One so there would be a need to move. The club can get to a steady base of 5,000 home fans within five years and sit around League One but I would be very surprised it ever reached the Championship, let alone the Premier League,” Mr. Youd told Sputnik.

“Salford fans won’t be devastated if we don’t go up automatically. We are just grateful the club has grown to the stature is has and are enjoying the ride. The response from rival fans is laughable and full of jealousy,” Mr. Youd told Sputnik.