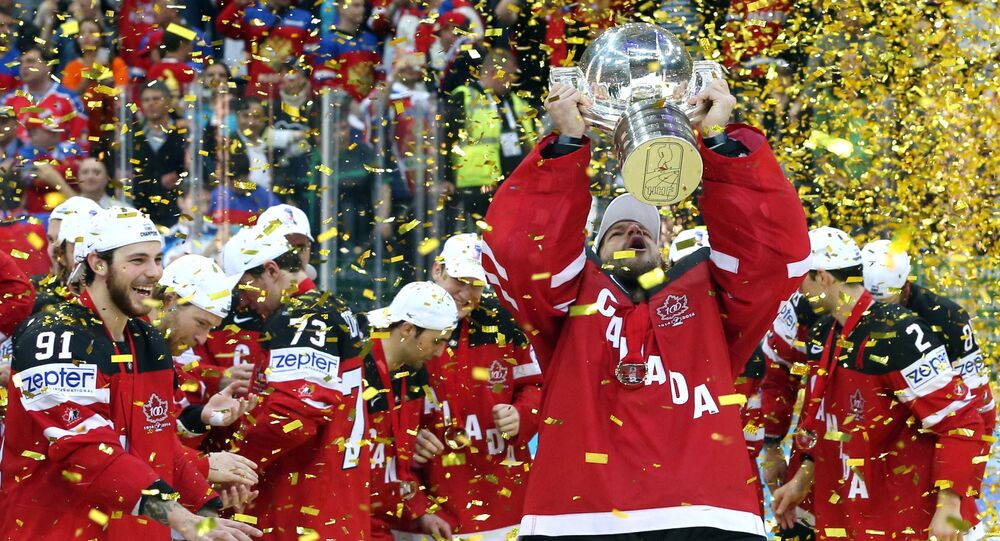 Russia lost to Canada at the IIHF 2015 World Championship in the Czech Republic.

Canadians winning the 2015 Ice Hockey World Championship. Congratulations, you have been unbeatable this year!!! pic.twitter.com/CW9NIrKPpi

The final score was 6:1, in favor of the Canadian team. Evgeny Malkin, who plays for the Pittsburgh Penguins, scored the only goal for the Russian team at the 53rd minute of the game.

Canada's team is the only team in the tournament which did not lose a single match of the nine they played. Canadians also lead by the number of goals (60 in nine games). Russia's team lags behind these results, going for the second place with 39 goals overall.

I guess not even the Soviet Union at their best were ever as dominant as Canada during this ice hockey world championship. #РоссияКанада

Russia and Canada will compete for the Gold Cup for the first time since 2009, when the Russian team beat pioneers of hockey with a score of 2:1.

The defeat of the Russian players on the Canadian team in the World Cup finals in Prague reminded the game between Russians and Canadians at the 2010 Olympics in Vancouver, said Russian forward Evgeny Dadonov.

"Probably, psychologically, they were better prepared for the finals — Dadonov told reporters. — I won`t speak about the silver. Of course, we wanted gold. The disappointment after such a great defeat. Still, this is Canada, the World Championship finals. I remember the Olympics in Vancouver, I watched it on TV, the match seems to be very much alike. "

"It was probably the excitement that affected or something else" — the hockey player added. — "At some moments of the game the team showed that the scoreline was not so terrible and can be outgamed. Maybe it was not possible from the beginning: not enough experience or something else. Perhaps, they had the goal better protected. But when we missed three goals in the second period, it was difficult to win. But the team struggled to the end. "

Slovakia to Host Ice Hockey World Championship in 2019, Switzerland in 2020