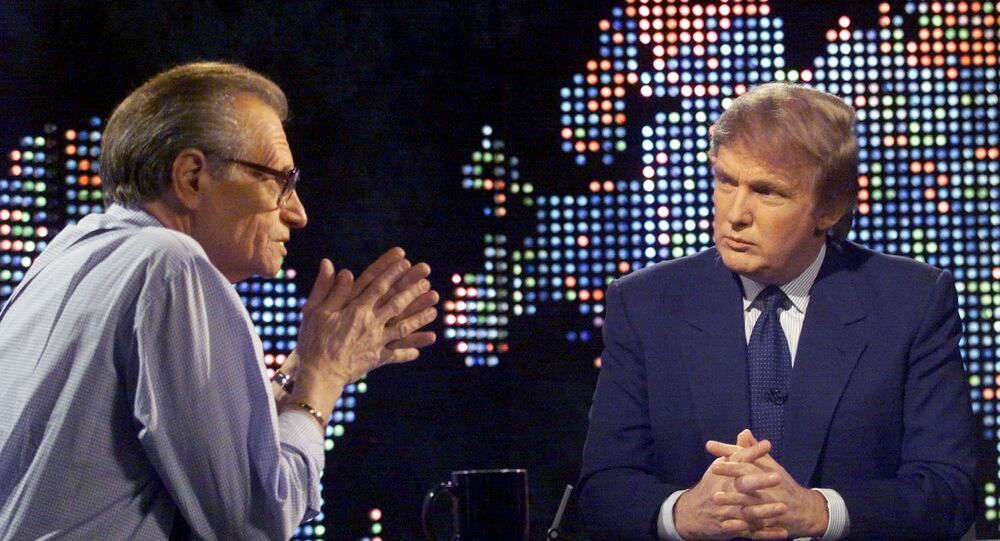 From Sinatra and Brando to Trump and Putin: Most Notable Guests of Late TV Giant Larry King

In a radio and television broadcasting career spanning over 60 years, Larry King interviewed tens of thousands of people ranging from celebrities and newsmakers to US presidents and foreign leaders. King passed away on Saturday morning at the age of 87.

Larry King said the secrets to a great interview are listening closely, asking short, simple questions, allowing the interviewee to respond, and making follow-up questions based on the answers.

“The key of interviewing is listening,” King said in an interview in 2017. “If you don’t listen, you’re not a good interviewer. I hate interviewers who come with a long list of prepared questions…that’s not the way it works for me. So I concentrate solely on the answer, and I trust my instincts to come up with questions.”

Another factor, according to King, is being neutral, getting beyond politics and focusing on the interviewee’s humanity. “If you have an agenda, you’re not gonna learn, in my opinion…I’m interested in a heart of a person. How people react to things. What’s it like to be a president and send someone to war. What’s it like at night when you get the statistics – 132 killed today. How do you sleep?”

During his career, which included two decades of radio and television work in Florida, seven years on national radio, 25 years on CNN’s Larry King Live and a decade more after that on Ora TV, King applied these principles to create a vast collection of informative, organic discussions with many of the top US and international newsmakers of the past three-and-a-half decades.

Larry King’s friendship with Donald Trump spanned decades, with King calling the New York billionaire socialite one of his “oldest, dearest friends,” and maintaining the friendship even after telling him that he couldn’t vote for him in 2016. Trump’s toying with the idea of running for president went back to the 1980s, and in 1987, King was one of the first journalists to bring out the Trump known around the world today – the brash outsider and critic of the political establishment over its alleged selling out of American interests to foreign countries.

King interviewed Trump “countless” times after that, including a famous 2013 interview in which he asked him “why not run” after implying he had already achieved all he could hope for in the business and entertainment world.

In September 2000, King became one of the first foreign journalists to conduct an extended interview with Russian President Vladimir Putin. The two discussed a range of topics, from the 2000 presidential election in the US, to the Kursk submarine disaster, US plans for missile defence, Putin’s past as a KGB officer, and Russia’s uncertain economic future.

In that interview, King also got Putin to reveal his human side to US audiences. When asked whether he believed in God, Putin answered: “I believe in human beings. I believe in his good intentions. I believe that all of us have come to this world to do good. And if we do so, if we do so together, then success is waiting for us...Most important, we will achieve the ultimate goal – comfort in our own heart.”

King also famously interviewed dozens of other foreign leaders whom the US mainstream media and political class considered "dictators." In 2009, he spoke to Libyan leader Muammar Gaddafi, later describing the interview as “the worst” he’s ever done.

“He’s not an easy person to talk to, as opposed to say [Hugo] Chavez [of Venezuela] who is terrific to talk to. Some people are like ‘American’. Chavez would be a successful, in my opinion, American politician. He has flare, has dynamism, he has exuberance, he changes the room,” King reflected.

King spoke to Chavez in 2009, becoming one of the last foreigners to interview him before the Venezuelan leader lost his long battle with cancer in 2013. The two discussed Venezuelan-US relations, the need for mutual respect and equality between nations, and US imperialism. After Chavez’s death, King described him as an “extremely warm…very open, huggable” person and revealed that the men had discussed baseball “for ten minutes before the interview started,” with Chavez consciously switching from his “perfect English” to a translator “to show the people of Latin America he was speaking their language.”

The television journalist also spoke to Iranian President Mahmoud Ahmadinejad repeatedly, discussing many of the topics that remain relevant to this day – from Iran’s alleged nuclear ambitions and US sanctions to the Iranian-Israeli conflict in the Middle East, with Ahmadinejad famously asking “why is there so much insistence in the United States to absolutely defend the Zionist regime?” leading to a tense face-off with King on the contemporary implications of the Holocaust.

King’s interviews with celebrities are too numerous to list, covering a range of subjects from the serious – such as O.J. Simpson’s famous call-in to CNN the day after a jury found him not guilty of killing his wife and her lover, to the sublime – like interviews with Marlin Brando, crooner Frank Sinatra, and comedian Jerry Seinfeld. In 2010, King said Sinatra was one of his most memorable guests, characterising the singer as an “extraordinarily talented, unhappy, fascinating,” and “remarkable” person who had opened up to him and allowed him to enter his inner circle.