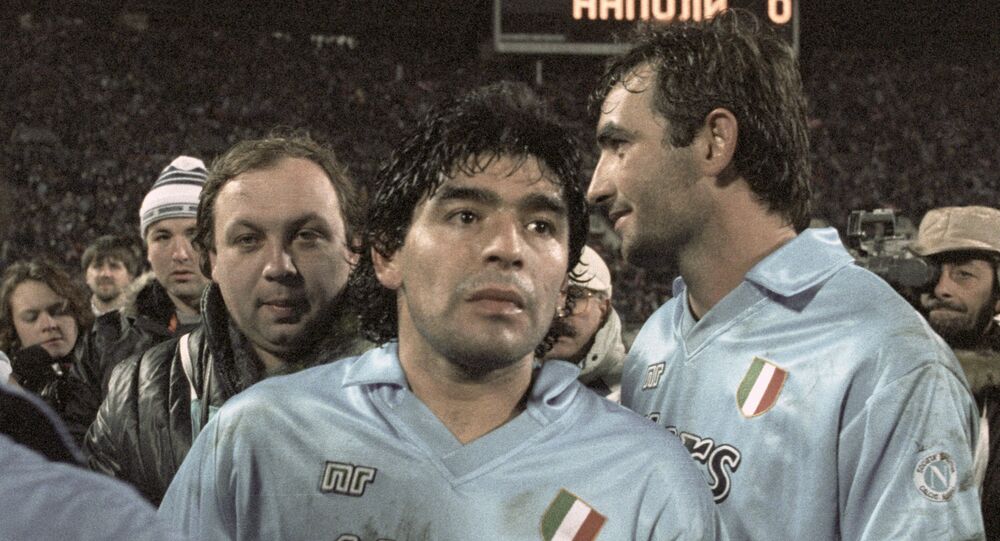 The Argentine football icon died on Wednesday at the age of 60 of a cardiac arrest. His death prompted a flood of tributes from around the world, including a controversial homage from French President Emmanuel Macron.

In a statement released by the Elysee Palace on Wednesday, Macron suggested that Maradona’s friendships with “Fidel Castro and Hugo Chavez will taste like a bitter defeat,” because it was on the pitch that the footballer “made the revolution".

Reacting to Macron’s remarks on Twitter, Venezuelan Foreign Minister Jorge Arreaza suggested that although “Macron and his advisers wanted to deploy their poetic prose to send off the great Diego,” they ended up dishonouring his ideals and struggles.

“The only defeat is that of a political class which trembles before the yellow uniform of the workers,” Arreaza quipped, referring to the Yellow Vests movement, which has carried out large-scale protests in France over the past two years, and has been compared in its scale and impact with the demonstrations of May 1968.

Prompted by the policies of Macron's government, including austerity measures, the introduction of a new fuel tax and a simultaneous repeal of a wealth tax on France’s richest people, the Yellow Vests protests forced the government to repeal part of its neo-liberal agenda, including a freeze on a planned fuel tax hike, an increase in the minimum wage and the cancelation of a tax increase on low-income pensioners.

In later life, Maradona maintained friendships with many of Latin America’s social democratic, democratic socialist and communist leaders, including Peronist President of Argentina Nestor Kirchner, Bolivian President Evo Morales, Venezuela’s Hugo Chavez and Nicolas Maduro, and Cuba’s Fidel Castro. Maradona’s political causes also included support for Palestine, opposition to the US-led war in Iraq, support for Iran, and a war of words with the late Pope John Paul II over the discrepancy between what the Catholic Church says about the need to help the poor and its own opulence.

I share this beautiful video that shows us Commander Fidel Castro and Maradona, in a very beautiful and humorous moment for both of us, which tells us that life is worth living. Thank Life, Thank God! pic.twitter.com/Uw1fNSWe94

© AP Photo / Alastair Grant
Messi or Ronaldo? Diego Maradona Had the Answer
Macron didn't just manage to enrage the Left with his tribute to Maradona. Earlier, conservative British tabloids blasted the French president for his line about defeating “Thatcher’s England” in the quarter final of the World Cup in 1986, in what Macron dubbed to be “the most geopolitical match in football history”. Several papers including The Sun, The Mirror and Express took issue with the language used by Macron, with the Mirror calling it “a blatant dig at the late former UK prime minister Margaret Thatcher”.

Diego Maradona died on 25 November at the age of 60, suffering a cardiac arrest while recovering from brain surgery which he underwent in early November. His death prompted Argentina to declare three days of mourning, with hundreds of thousands of fans lining up to bid farewell to the superstar.