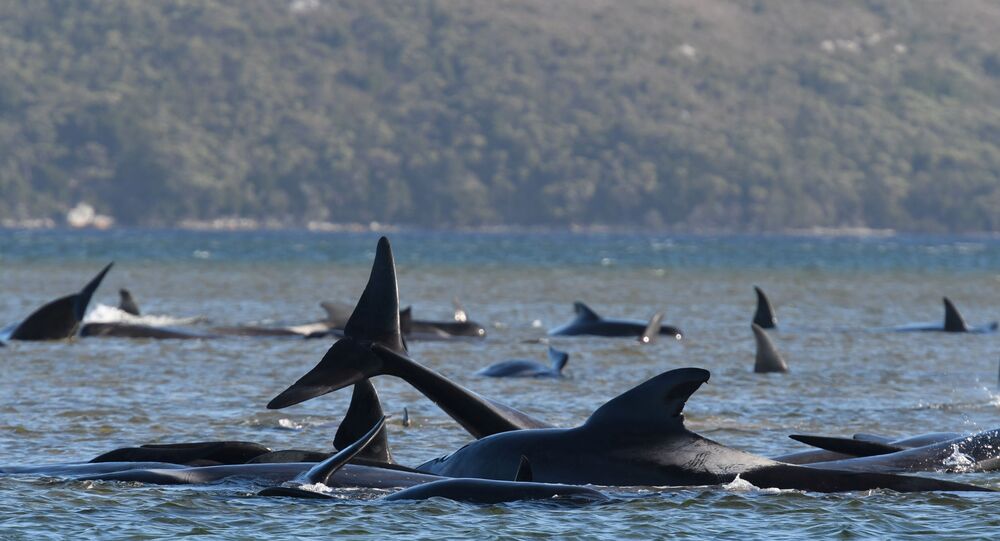 At least 25 whales have died in a remote bay on the Australian island of Tasmania, officials revealed Monday, with more than 200 other whales currently stranded.

According to Tasmania’s environment department, the whales became stuck on a sandbar in Macquarie Harbor, which is on the island’s west coast. Officials are currently in the process of trying to rescue 250 more stranded whales, AFP reported.

​​Two large groups of whales are currently stranded on sandbars inside the harbor, Nic Deka of Tasmania's Parks and Wildlife Service reported.

“They are in water, but it’s very difficult to see how many of those whales are deceased or what condition they’re in,” he told reporters Strahan, a town in Tasmania.

​"The main pod that's stranded is on a sandbar that's about 100 meters off the Macquarie Heads boat ramp, and there's a further pod on another sandbar several hundred meters further out from there," Deka added. A pod refers to a social group of whales that travel together.

The stranded creatures are believed to pilot whales, which belong to the genus Globicephala. However, the species has not yet been confirmed by the environment department.

Police and marine experts are planning to launch a rescue mission on Tuesday morning local time.

“In terms of the tides, when we start making an effort tomorrow it will be with an outgoing tide, so that’ll be in our favor, but obviously tides go up and come down so we’ll be aiming to make the most of the windows that we have,” Deka explained.

Although mass whale strandings are not uncommon in Tasmania, there are far more whales involved in this incident than usual.

According to AFP, authorities may convene a network of volunteers to help with the rescue effort.

"When we start making an effort tomorrow, it will be with an outward-going tide, so that will be in our favor, but obviously tides go up and down so we'll be aiming to make the most of the situation," Deka told the Australian Broadcasting Corporation.

Prince of Whales: Humpback Puts On Show For Amazed Spectators in Boat