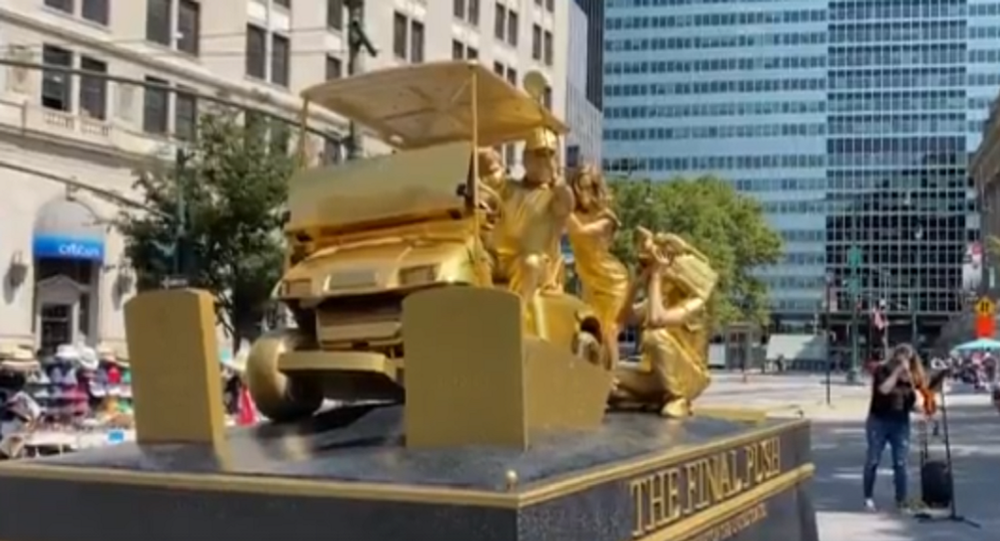 A living statue, showing US President Donald Trump desecrating the graves of COVID-19 victims and fallen soldiers, was displayed in New York City’s Manhattan on Tuesday.

The living statue was performed by actors covered in gold paint and depicts Trump driving a golf cart over the graves, along with Fox News hosts Laura Ingraham and Sean Hannity in the backseat, appearing to celebrate the president’s actions.

​The group behind the performance is the Trump Statue Initiative (TSI), an organization that aims to “share their point of view on our 45th President's most notoriously self-serving, narcissistic, and racist moments.”

Some of the tombstones depicted in the statue read: “In Tragic Memory Of: ‘It Is What It Is,’” a reference to Trump’s comment last month in response to the increasing US COVID-19 death toll, which is nearing 200,000, according to the latest data by Worldometer. One of the tombstones also reads “In Tragic Memory Of: ‘Loser,’” a reference to a remark Trump allegedly made about fallen US soldiers.

​In an interview with the New York Daily News, Bryan Buckley, the project’s curator, said that the TSI exhibited similar installations in Washington, DC, and Portland, Oregon, earlier this summer.

“The news cycle is so fast right now. Even the ‘loser’ thing - three, four days later it was pushed out of the headlines. I see this as an opportunity to slow down and get voters to think about this moment and really think about ‘Am I okay with this moment?’ If not, then you should help vote this president out of office,” Buckley said.

In recent weeks, Trump has made headlines several times for negative reasons, which were referenced in the living statue performance. In his upcoming book “Rage,” journalist Bob Woodward reveals that Trump knowingly downplayed the danger posed by COVID-19 in the early days of the outbreak.

In an article published in The Atlantic on September 3, the outlet’s editor-in-chief, Jeffrey Goldberg, quotes various anonymous sources claiming that the president had repeatedly disparaged service members.

Goldberg claims that Trump canceled a visit to the Aisne-Marne American Cemetery near Paris in 2018 and had said: “Why should I go to that cemetery? It’s filled with losers.” In another instance, Trump allegedly referred to the more than 1,800 US Marines who died at Belleau Wood in World War I as “suckers.”

Special Relationship: Donald Trump Reportedly Bullied Theresa May and Almost Made Her Cry