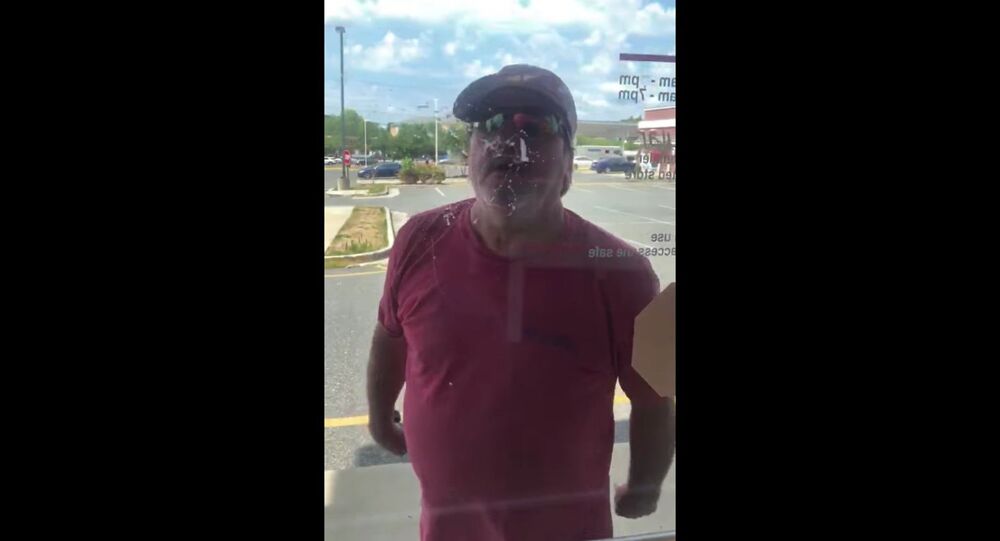 Newly surfaced cellphone footage has shed light on a Virginia resident’s recent, violent rant in which he yelled out several expletives and racial slurs toward Verizon retail store employees after encountering difficulties with his phone.

Virginia local Robert Colonna had gone to the Verizon shop in an effort to fix an issue with his phone; however, moments after arriving at the store, the situation quickly escalated after the disgruntled customer reportedly began to toss around merchandise.

Percell Wright, the store employee who captured and shared the recording over the weekend on Facebook, explained in a post that Colonna was immediately locked out of the establishment after he allegedly said “he had something else” for the employees before walking back to his truck.

The recording of the July 15 incident picks up with Colonna locked outside and visibly outraged over his situation as he continuously yells at the store employees from the other side of the glass doors.

“Yeah, put me on TV because your products suck,” Colonna is heard saying before subsequently opting to spit on the door. “I’m glad your f**king s**t works, cause mine don’t, you f**king n****r.”

“F**k you, you g**d**n country n****r,” he adds, following up the slur by throwing an object, presumably his cellphone, at the storefront. “Is that why your s**t doesn’t f**king work?”

Video later shows Colonna urging one of the store employees to “come on out and f**king get some” as he goes into a fighting stance with both his fists raised in the air. “Come on boy, I'm ready. Let’s go,” he yells.

Colonna’s temperament briefly eases after he comes close to the glass door and informs Wright that he just “[wants his] s**t fixed, man.” The moment lasts all of a few seconds, as he then yells out another “f**k you” before starting to repeatedly bang on the store’s windows.

While Colonna’s fit drags on, a store employee can be heard on the phone in the background saying, “Yeah, he’s a racist. He just called me and my representative a n****r.”

After tossing a few more expletives, Colonna eventually makes his way back to his company car to cover the license plate, but one of the employees then opens the door to let Colonna know that they already recorded the identification.

An unhappy Colonna is then prompted to run back to the storefront, attempting first to open the locked door and then to kick it in, to no avail. The video ultimately cuts off after Colonna walks back to his vehicle and is then approached by a law enforcement official with the Stafford County Sheriff’s Office.

Court records show that Colonna was written up on a disorderly conduct charge and that he has been released on bail. He is scheduled for arraignment in the Old Dominion State on July 24.