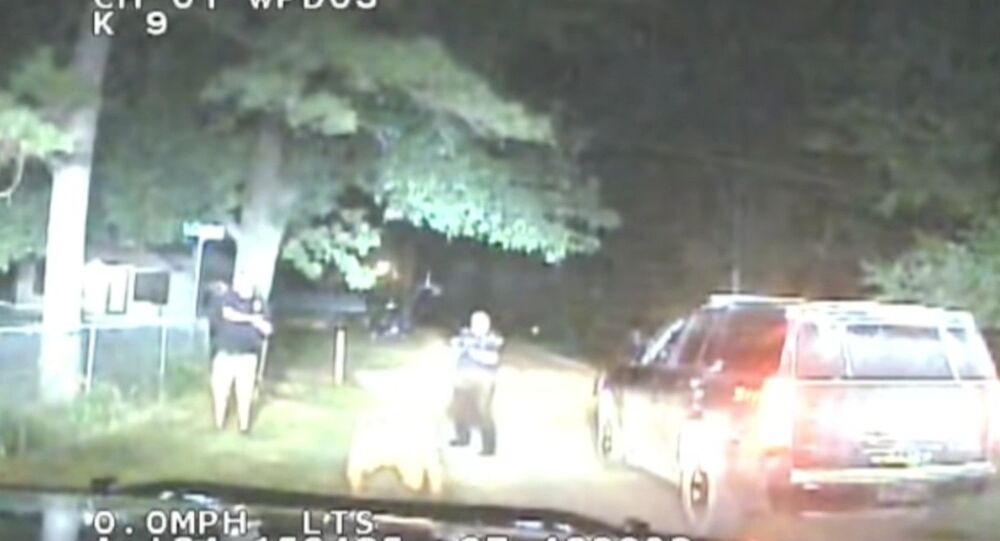 Newly released footage from Oklahoma’s Wilson Police Department has offered renewed insight into the fatal 2019 arrest of Jared Lakey, 28, who died after two officers simultaneously deployed their stun guns over 50 times on him.

The body camera and dashcam footage was released Monday by the office of Bryan & Terrill Law, the firm representing the Lakey family for the duration of legal proceedings. The unedited footage of the incident was 50 minutes long, however, the recording was trimmed down to 10 minutes prior to its release due to the sensitivity of the incident.

Officers Joshua Taylor and Brandon Dingman first encountered Lakey at around midnight on July 4, 2019, after a Wilson dispatcher alerted officers to reports of a nude individual who was running down a street and screaming.

The footage begins with the 911 call made about Lakey and later transitions to the arrest scene, with Taylor standing over Lakey as Dingman repeatedly instructs him to place his hands behind his back.

It’s worth noting that the first officer who arrived at the scene was Taylor, but his body camera was turned off. It was not until Dingman arrived on the scene that both cameras were turned on, attorney Steven Terrill told ABC News.

“Noncompliance is gonna get you tased,” Taylor is overheard saying while pointing his department-issued stun gun directly at Lakey, who is lying on the ground.

Within seconds, Lakey starts grunting and yelling out in pain as the first shots of electricity are delivered from both stun guns at the same time. “Oh, g**da**it, stop,” he yells out, falling to the ground after being upright on his knees.

It’s at this point in the recording that one of the officers radios for backup, claiming that Lakey is being combative, and notes that three stun guns are being used to subdue him.

For much of the video, both Taylor and Dingman repeatedly instruct Lakey to place his hands behind his back, an order which is immediately followed with multiple shocks. Taylor is heard telling Lakey at one point in the video that if he follows orders he will “quit getting tased.”

“Oh, help me! Help me, please,” Lakey pleads after another round of shocks is delivered. “Please God, help.”

Although both officers eventually acknowledge having to “go hands on” with Lakey, they both continue to stun him multiple times as he lies on the ground. At one point in the video, Lakey goes completely silent, but both officers still opt to deliver another shock.

Video later shows a deputy with the Carter County Sheriff’s Office arriving to assist in the arrest. The unidentified official immediately places Lakey in a chokehold for a period of over 40 seconds as Taylor and Dingman work to place Lakey in handcuffs.

As a result of the chokehold, Lakey momentarily fell unconscious before reawakening; however, he later stopped breathing and became unresponsive after an officer had sat him upright with his head pushed down toward his chest.

Lakey was transported to a Carter County hospital in Healdton before being transferred to OU Medical Center in Oklahoma City, where he died two days after his arrest. Citing Carter County records, the Daily Ardmoreite reported that Lakey’s death was caused by complications from a heart attack and “law enforcement use of electrical weapon and restraint.”

An investigation into both officers' use of force revealed that over a period of nine minutes, Dingman and Taylor deployed their stun guns 23 and 30 times, respectively. The Oklahoma State Bureau of Investigation found that the cumulative amount of time during which Lakey was being shocked amounted to nearly four minutes.

Taylor and Dingman were charged with one count each of second-degree murder on July 1, 2020. Each has been released from custody after posting a $250,000 bond. The unidentified third officer was not charged for his involvement in the arrest.

Taylor and Dingman are due in court on August 27.