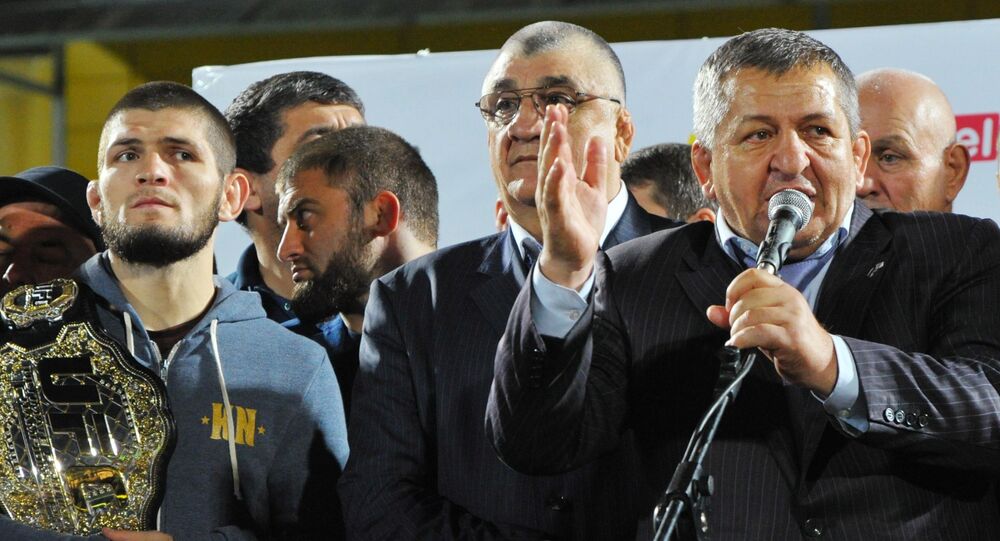 Abdulmanap Nurmagomedov, the father and coach of UFC champion Khabib Nurmagomedov, died on 3 July at the age of 57 after a long battle with coronavirus-related health complications.

MMA fighter Khabib Nurmagomedov has commented on the death of his father, Abdulmanap Nurmagomedov, in a conversation with the head of Russia's Chechen Republic Ramzan Kadyrov.

"We did everything, we could. It's important to remember and to acknowledge this", the athlete said.

He thanked Kadyrov for his support, saying "Let this unite our peoples [of Chechnya and Dagestan]. We thank you, thank you very much".

The UFC has published a statement, expressing its sincerest condolences to the Nurmagomedov family on the passing of Adbulmanap Nurmagomedov.

"The father and coach of UFC lightweight champion Khabib Nurmagomedov, Abdulmanap was an elite athlete in his own right, earning Master of Sports recognition in freestyle wrestling. Also proficient in judo sambo, Abdulmanap went into coaching after his career concluded, and his success garnered him the title of Honored Coach of Russia. That coaching excellence was evident by watching the dominant style of his son Khabib, but Abdulmanap also played a pivotal role in the lives of countless Russian fighters who made their way to the top mixed martial arts events around the globe, and his loss will be felt throughout the sporting world", the statement said.

​Abdulmanap Nurmagomedov, who trained a huge number of titled fighters, suffered a stroke after contracting COVID-19 in early May. He was in intensive care at a Moscow hospital. His son previously said that the coronavirus was treated, but that there were complications with his kidneys and heart.

The famous trainer passed away on Friday, after a nearly two-month struggle with the disease.

Khabib Nurmagomedov is a Russian professional mixed martial artist, a two-time Combat Sambo World Champion, and the reigning UFC Lightweight Champion. He claimed his 28th victory in a row in September, defeating Dustin Poirier via a rear-naked choke in round three at the Abu Dhabi tournament.