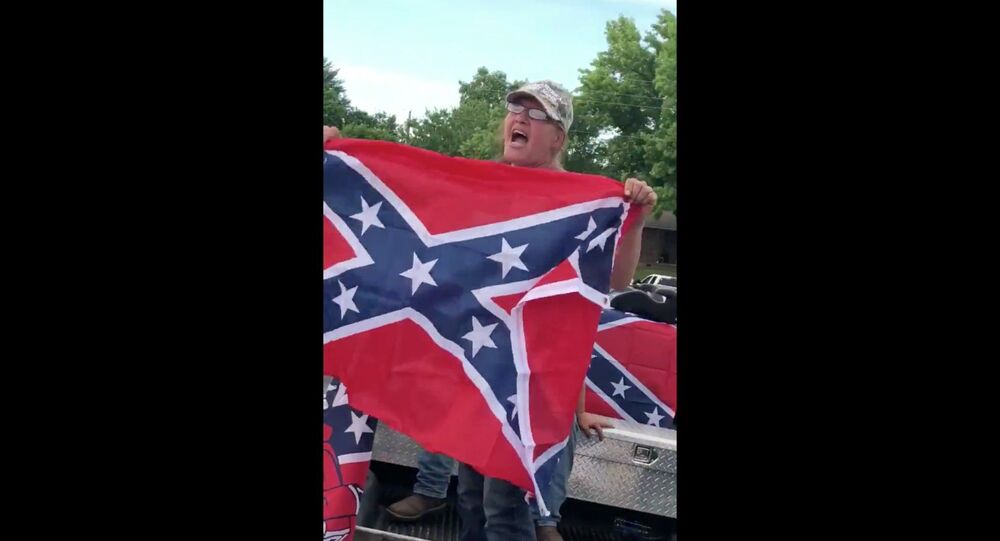 Newly surfaced cellphone footage captured a Missouri resident lashing out at a group of Black Lives Matter (BLM) protesters, informing members of the demonstration that she would be teaching her grandkids to “hate” them.

The recording itself was taken over the weekend in Branson, Missouri, near Dixie Outfitters, a local area shop known for its display and sale of Confederate-themed merchandise.

The demonstration was the second consecutive weekend protest that focused on the store; however, according to the local outlet the Kansas City Star, unlike the previous protest, Confederate flag-waving individuals appeared at the site in defense of the establishment over the weekend.

Video of the events that unfolded on Sunday showed protesters facing off on opposing sides, but the recording that captured much attention was that of a counter-protester who began firing off heated remarks toward BLM protesters.

“Too bad, too bad, too bad. I will teach my grandkids to hate you all,” the unidentified woman, who is seen sporting a “Make America Great Again” hat, is overheard saying.

Moments before tossing her fist in the air, the woman ends her brief remarks by shouting “KKK belief.”

Per the Kansas City Star, Anna and Nathan Robb, the owners of Dixie Outfitters, both have familial ties to the Ku Klux Klan (KKK), the infamous white-supremacist group long known for its violent acts against non-white individuals.

Citing the Southern Poverty Law Center, the outlet reported that Nathan is the son of Thomas Robb, an Arkansas-based pastor who headed the KKK in the 1980s following the departure of David Duke.

Quinn Foster, who acts as the director of the Arkansas Hate Watch group and was present at the weekend protest, told the Kansas City Star that the owners “have enabled the spread of hate.”

“This is America. We don’t support states that rebelled against us for slavery,” he said. “It’s as simple as that. That flag up there is no different than burning the American flag.”

Additional footage of the scene shows multiple counter-protesters sitting on the backs of various pickup trucks parked in front of Dixie Outfitters proudly displaying Confederate flags, as officers from the local police department are seen scattered in between the two sides of the demonstration.

As Dixie supporters began playing Lynyrd Skynyrd’s “Sweet Home Alabama” over loudspeakers, one BLM protester used the opportunity to rewrite the lyrics and give the song a new, creative spin, video shows.

Hours after the first groups of protesters showed up on the scene, video shows supporters of the Confederate-themed story slowly beginning to trickle out of the area.

“The South is surrendering again,” one BLM protester was overheard shouting from a megaphone, the Kansas City Star reported.