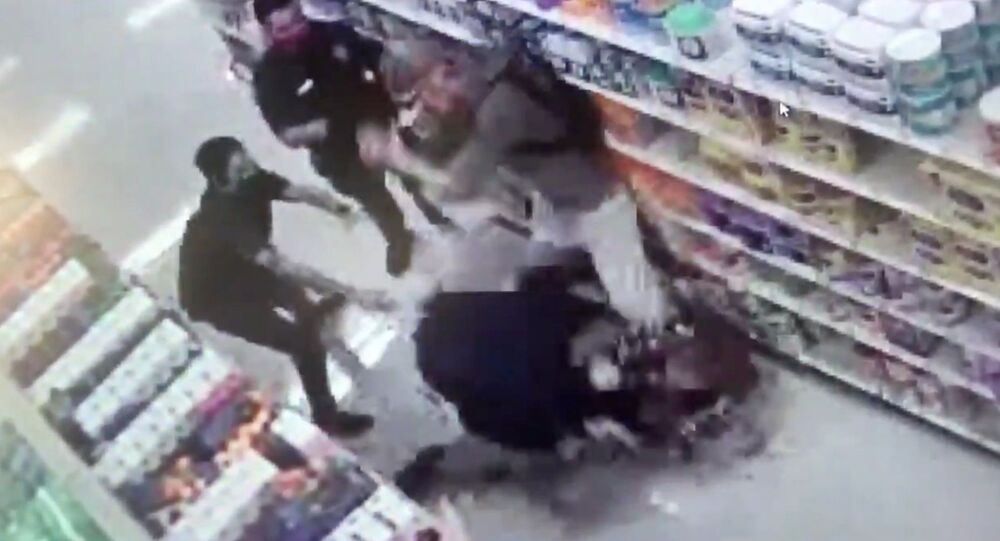 Newly released surveillance footage has offered additional insight into events that unfolded in early May, when two shoppers at a Target store in California initiated a brawl with three security guards while they were being escorted out for not wearing face coverings.

The incident took place on May 1 at roughly 10:20 a.m. at a Target store in the Golden State’s Van Nuys area, with surveillance footage later being released Monday by the Los Angeles Police Department (LAPD).

Video of the altercation initially shows locals Philip Hamilton and Paul Hamilton being escorted from the establishment over their failure to adhere to the county-imposed rule that all individuals must wear face masks; however, the incident quickly escalates after one of the would-be customers strikes one of the guards.

Recording obtained by Fox 11’s local news reporter Gigi Graciette shows one of the Hamilton shoppers take the first swing at one of the guards before a second guard steps in and pushes the attacker against aisle shelves. It’s at that moment that the second half of the Hamilton duo jumps in and begins to repeatedly punch and kick the assisting guard, eventually forcing him to fall on the ground and wrestle with the initial attacker.

Surveillance footage also recorded one of the attackers pushing a third guard to the floor after being pulled into a body hold. The physical altercation was eventually brought to a close after concerned shoppers intervened.

Unfortunately, not everyone emerged unscathed, according to the Sacramento Bee, which reported that one of the guards had his arm broken during the scuffle. Video footage would suggest that the injured security official was the second guard to get involved after the first punch was thrown. He reportedly broke his arm upon falling onto the floor.

Citing police officials, local news station NBC Los Angeles reported that the Target employee was hospitalized, and that the two suspects were later arrested by officers after fleeing the scene. The pair were booked on the suspicion of felony battery and were released on May 5. It’s unclear how the two men are related.

Lt. Jim Gavin of the LAPD,told Fox 11 that the Target altercation marks the fourth such incident in the Van Nuys area to occur between store employees and shoppers who are refusing to wear masks.

Residents of Los Angeles County have been under strict orders to wear face masks in public since mid-April, when LA Mayor Eric Garcetti implemented his Safer at Home order in an attempt to curb the spread of COVID-19 in the densely populated county.

In other areas in the US, it’s not just mandated masks that are causing scuffles or triggering moments of rage. Earlier this week, reports emerged from Texas that a disgruntled customer attacked a grocery store clerk over the store’s meat buying limit.