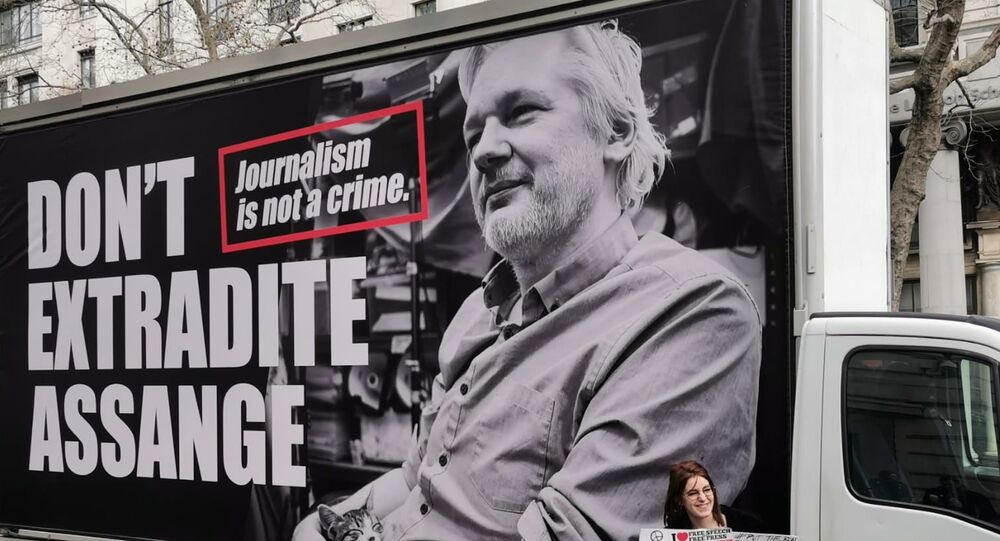 WikiLeaks’ editor-in-chief Kristinn Hrafnsson stressed that Assange, quarantined on the grounds of the max security London facility, is “in very bad shape", specifically bringing up the latter's chronic lung condition which makes him particularly susceptible to the raging virus.

WikiLeaks publisher Julian Assange’s health is grave danger, as Belmarsh Prison in downtown London, where he is being held, has recorded its first COVID-19 death among a whole slew of confirmed infections, WikiLeaks’ editor-in-chief Kristinn Hrafnsson told RT.

According to the journalist, the prison grounds are a virtual breeding ground for viruses, as the maximum security territory houses as many as over 790 inmates in a strictly enclosed space.

Referring to the prison environment as as "petri dish", Hrafnsson remarked that the number of cases is in fact hugely underreported, since prison authorities have simply not conducted enough tests on the population to “know what is going on exactly".

He asserted that Assange is “in very bad shape", going on to stress his vulnerability arising from “an underlying lung condition". He noted that the WikiLeaks founder “would be considered at great risk even if living normally in society".

“He is in a situation when his life is in danger every day and every hour", the journalist summed up.

Hrafnsson also noted that Assange is unable to take part in any court sessions now because otherwise he has to be moved through the infected prison premises, adding Assange’s lawyers haven’t had contact with their client for about three weeks.

On Tuesday, Judge Vanessa Baraitser announced an intention to hear the bulk of evidence concerning Assange's case on 18 May, admitting that the hearings may well spill into June. Hrafnsson lashed out at such an approach as “just scandalous".

On 24 March, WikiLeaks released a statement drawing the public and court officials’ attention to the fact that "Julian Assange falls into a category of persons who should be released to mitigate the impact of COVID-19".

The WikiLeaks founder has been behind bars for roughly a year, ever since Ecuador revoked his political asylum and let Britain kick Assange out of the Ecuadorian Embassy in London. Assange is currently in a legal battle and fighting an extradition request by the United States to stand trial there on espionage charges over the release of Iraq and Afghanistan-related diplomatic cables by WikiLeaks.

On 4 April, the British government announced that as many as 4,000 prisoners in England and Wales - namely mild, low-risk offenders - will be temporarily released with an electronic tag on them, to more effectively contain the spread of the novel virus.

Per fresh WHO estimates, the UK has now confirmed 51,612 positive corona cases and 5,373 related deaths.

Judge Decides Identity of Julian Assange's Partner Can Be Revealed, But His Defence Will Appeal