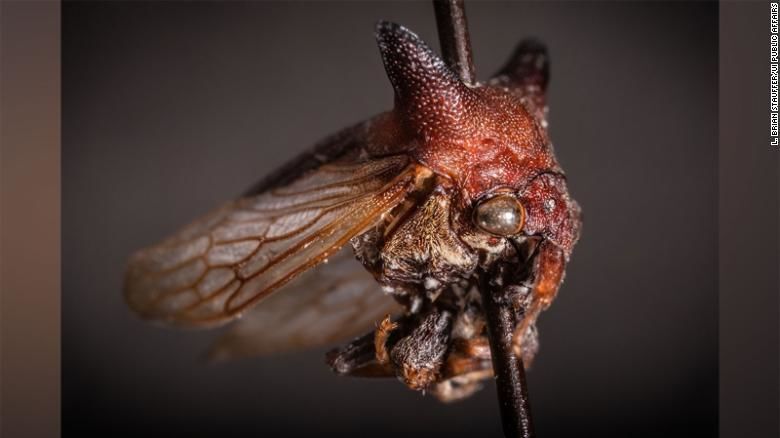 The discovery of the new insect species, which belongs to an obscure treehopper group, was made by an entomology graduate student with the University of Illinois at Urbana-Champaign.

Discovered in Nicaragua, a new treehopper species with spiky horns and an unusual appearance has been named “Kaikaia gaga” after American pop singer Lady Gaga.

Brendan Morris, an entomology graduate student at the University of Illinois at Urbana-Champaign, who studied and named the new insect, said he named the bug after Lady Gaga for the artist's “flamboyant, shape-shifting style”.

A new treehopper species was named "Kaikaia gaga" after @ladygaga: "If there is going to be a Lady Gaga bug, it's going to be a treehopper, because they've got these crazy horns, they have this wacky fashion sense."

the resemblance is uncanny! pic.twitter.com/x87KMvB35X

“If there is going to be a Lady Gaga bug, it's going to be a treehopper, because they've got these crazy horns, they have this wacky fashion sense about them,” Morris said in a press release. “They're unlike anything you've ever seen before”.

According to Morris, who borrowed a specimen from the Carnegie Museum of Natural History in Pittsburgh, Pennsylvania, to study along with nearly a thousand other treehoppers, the Kaikaia gaga has several unusual characteristics, including strange sex organs and spiky horns.

Kaikaia gaga feed on plants and communicate by creating vibrations that travel along plant stems.

“It blows my mind that a group that is roughly 40 million years old has so much diversity of form – diversity, I would argue, that we don’t see in any other family of insects,” the researcher said.

The treehopper specimen was originally collected some 30 years ago from a tropical forest on Nicaragua's Pacific coast. Although treehoppers populate most forests on Earth, they are not well-known primarily due to their diminutive size.