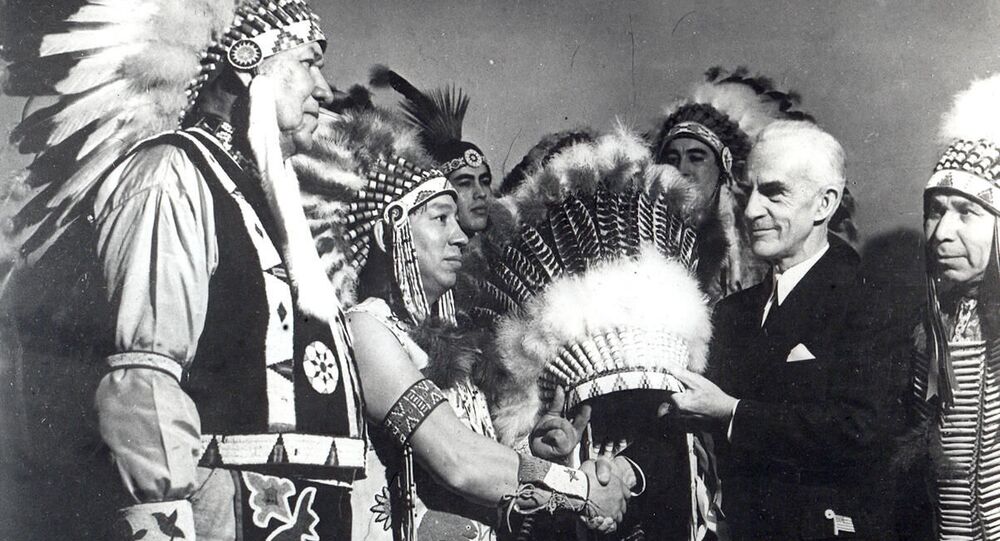 In 1941, after the Soviet victory near Moscow in 1941, when the myth of the Nazi Germany’s invincibility was dispelled, Joseph Stalin, leader of the peoples, was elected “honorary chieftain of the Indians.”

There was also a symbol of his new rank: the national Indian headdress. The Museum of Contemporary History of Russia told Sputnik the unique history of the exhibit.

Stalin was awarded the distinguished title by the Indian Confederation of America, comprising 27 tribes of the USA, Canada and Central America.

Roach, the headdress of the North American Indian chiefs, became the symbol of Stalin’s new status. It was made of feathers, decorated with ribbons, beads and sewing. According to the tradition of the Western Hemisphere indigenous peoples, this attribute of power not only meant military leader status, but it also possessed spiritual and protective power.

“There were many candidates, but it is Joseph Stalin whom the Indian chiefs elected the outstanding military leader as of 1941,” Edward Carter, Chairman of Russian War Relief, wrote to the Soviet Ambassador to the United States Konstantin Umansky.

It was impossible to personally award the “leader of the peoples” with the headdress: it was still a long way to the end of World War II, so Paul Horne (Fallen Trees), Head of the Indian Confederation of America and Chief of the Iroquois Mohawk, handed the gift over to Edward Carter, who was a metalworker at Brooklyn Port and a trade unionist.

The gift ceremony took place in February 1942 in New York in observance of Native American rituals.

“We present Joseph Stalin with the chief’s headdress, which he should wear as the distinguished chief of our tribes, as a symbol of our unity in the struggle against Hitler and our admiration for his leadership in this struggle,” the New York Times reported, citing Paul Horne.

The gift of the American Indians to Joseph Stalin made headlines right across America.

Historical sources are silent about whether the leader of the peoples liked the gift and whether he got around to trying it on. Nevertheless, this friendly gesture was appreciated: on 9 December 1944, the Stalin Secretariat handed the American Indians’ gift over to the State Museum of the Revolution.

The Indian headdress is currently stored in the reserves of the Museum of Contemporary History of Russia, the successor to the Museum of the Revolution.

On the occasion of the 75th anniversary of the Great Victory, the Museum of Contemporary History of Russia and Rossiya Segodnya have launched the War ArteFACT project, telling about the museum’s most interesting exhibits and the fates of the people behind them.

The Museum of Contemporary History of Russia is one of the world’s largest contemporary history museums. Its exhibition tells about Russian history from the second half of the 19th century to the present day. The museum is located in the city centre, on Tverskaya Street, in a building that is a monument to \ late 18 century Russian classicism.