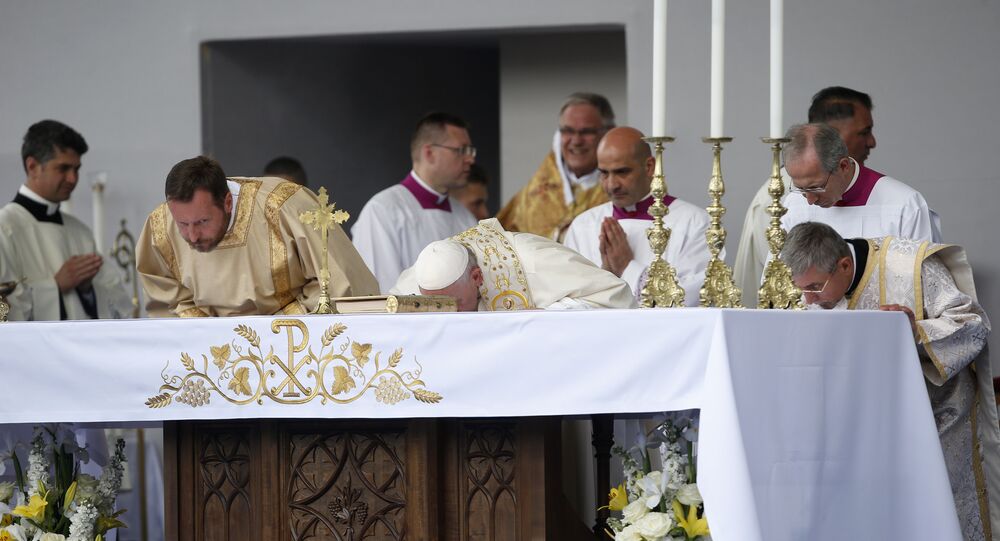 Pope Francis Blasts Critics ‘Stabbing Him in Back’, Says 'Not Afraid of Split' Among Catholics

Pope Francis has given a candid answer to a reporter’s question on attacks by conservative Catholic leaders and media in the US and beyond, speaking for the first time openly about a possible split in the Church, as many continue to denounce his, in their view, excessively liberal stance on abortion, divorce, etc.

While on a  flight back to Rome after his African trip, the Pope charged that his critics do not "want good for the Church", but only care about "changing popes, changing styles, creating a schism.”

Francis stated resolutely that he is “not afraid of schism”, citing multiple splits the Church has gone through during the 2000 years of Christianity, with the Roman Catholic Church being the largest branch with 1.3 billion baptised Catholics worldwide. The most famed breakaway was the so-dubbed Great Schism of 1054 between Eastern Orthodox Church and Western Christianity (Roman Catholics), which has been in place for almost 1,000 years now.

"I pray that there won't be one [schism], because the spiritual health of many people depends on it," Francis said, voicing his hopes emotionally.

The pontiff assumed that it is political ideology that had come into play in religious matters, especially given his perceived vocal support for the downtrodden and his harsh criticism of capitalistic values:

"The things I say about social issues are the same things [Pope] John Paul said. I copy him [and they say] 'the pope is too communist'," he told reporters going on to laud “constructive criticism”, while acknowledging that he had no time for “those who smile while stabbing you in the back.”

He then added that criticism comes not only from secular groups, but from the Catholic Church's governing body alike:

"The criticisms do not only come from the Americans [but] from everywhere, including the Curia," the pontiff admitted.

A number of Catholic leaders, predominantly those in the US, have accused the Pope of diluting their faith, going as far as calling for his resignation, in light of the Pope’s rather liberal views on immigration, family and his tough stance on environmental issues. Specifically, there has been considerable backlash over the Pope’s move to allow divorced and remarried Catholics to receive Holy Communion.

Separately, the conservative wing of the US Church frequently calls out Francis arguing that he is not sufficiently outspoken on abortion and way too compassionate towards homosexuals.  For instance, one of his most ardent critics, US Cardinal Raymond Leo Burke, has on multiple occasions denounced Francis’ handling of the clerical paedophilia crisis, which Burke has linked to homosexuality. Last week, Pope Francis made headlines when he hit back at attacks on him, referring to them as his exceptionally special “honour."