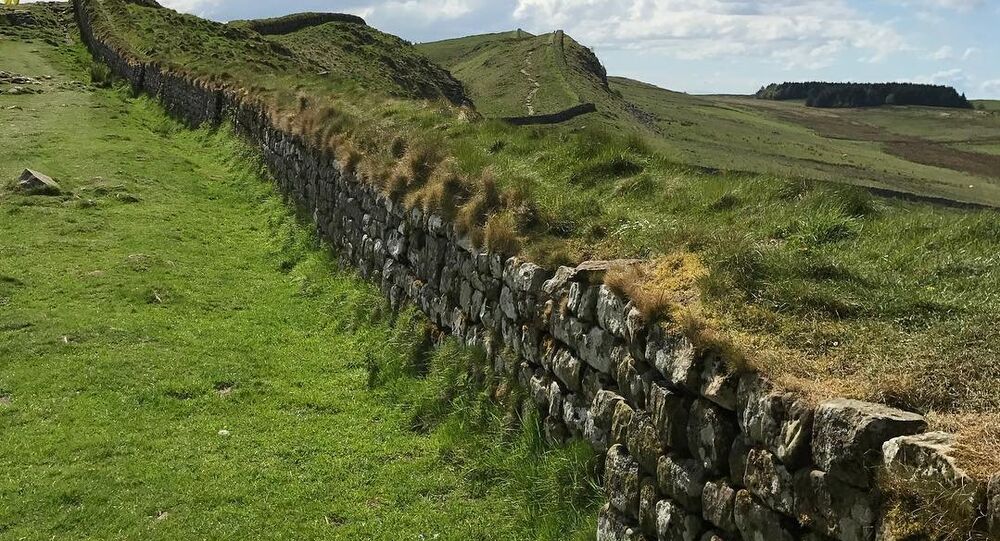 According to archaeologists, the rude imagery could have symbolized good luck in its day.

A number of ancient graffiti drawings have been discovered in a quarry near Hadrian's Wall in northern England, offering an insight into Roman soldiers' everyday culture, according to a report by Fox.

A caricature of a Roman officer and a crude image of a penis were found carved into sandstone at a quarry in Gelt Wood, near Carlyle, not far from the ancient Roman fortification.

A record's going to be made of some Roman graffiti at risk of eroding away at Hadrian's Wall #HeartNews https://t.co/lsehQBzwq0 pic.twitter.com/dcKoIPmpOl

​​According to Fox, the caricature likely depicts the superior officer of the soldiers who worked there, and the phallus symbol could have been a symbol of good luck during the Roman times.

Other inscriptions allowed the archeologists to date the graffiti. One of them reads "APRO ET MAXIMO CONSVLIBVS OFICINA MERCATI," a reference to the consulate of Aper and Maximus, which means the inscriptions were carved around 207 AD, when Hadrian's Wall underwent a major renovation, Fox says, citing Historic England, a UK government body.

This Phallus is a Roman symbol meaning 'good luck'

This graffiti from 207AD was discovered at a quarry near Hadrian's Wall quarry during recording work with archaeologists from @uniofNewcastle https://t.co/bmu8wMqCK0 pic.twitter.com/GdiuXyDwEp

​"These inscriptions at Gelt Forest are probably the most important on the Hadrian's Wall frontier," Mike Collins, Historic England's inspector of ancient monuments for Hadrian's Wall, said in a statement. "They provide insight into the organization of the vast construction project that Hadrian's Wall was, as well as some very human and personal touches, such as the caricature of their commanding officer inscribed by one group of soldiers."

Until the 1980s, the so-called "written rock of Gelt" was open to the public, until part of the quarry collapsed into a river.

Graffiti left by Roman soldiers near Hadrian’s Wall, including a caricature of the commanding officer, is being recorded by archaeologists from @UniofNewcastle

It give us clues about the military units involved, as well as the officers in charge https://t.co/bmu8wMqCK0 pic.twitter.com/07MvDBI8Nf

​Now, archaeologists want to record the inscriptions by conducting a laser 3D scan and saving the graffiti in a digital form.

"These inscriptions are very vulnerable to further gradual decay," said Ian Haynes, professor of archaeology at Newcastle University. "This is a great opportunity to record them as they are in 2019, using the best modern technology to safeguard the ability to study them into the future."

A World Heritage site, the 73-mile Hadrian's Wall stretches across the UK from Wallsend in the east to its western end at Bowness-on-Solway. Its construction began in 122 AD on the orders of Emperor Hadrian, who was visiting Britain at the time.