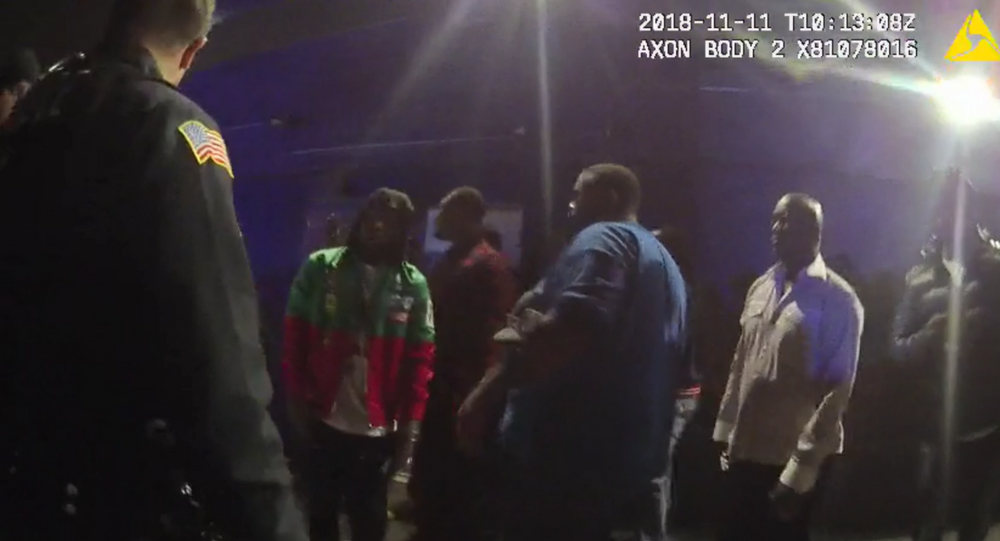 Authorities in Illinois publicly released a series of 15 recordings on Monday that were obtained from dashboard cameras, body cameras and cellphone videos captured on the night that a security guard was shot and killed by a local police officer in 2018.

Jemel Roberson, working at Manny's Blue Room Lounge in Robbins, Illinois, was fatally shot on November 11, 2018, by an officer from Midlothian, a neighboring Cook County town. The officer, identified as Ian Covey, arrived at the scene in response to shots being fired at the club.

The trove of video footage was released by the Cook County Sheriff's Office in response to a Freedom of Information Act request submitted by several media outlets. The videos show onlookers and members of the establishment's security team in shock as others yell out in frustration.

Another individual, who appears to be a fellow security guard at the club, later explains to responding officers what took place, stressing that Covey shot at Roberson despite being informed that the latter was member of the club's security. At the time of the shooting, Roberson was allegedly pointing his own licensed firearm at the suspected club offender.

​"This man comes up inside the f**king club with his rifle, pointing it at every f**king body," the man says. "[Roberson] had his gun still out, holding the offender on the ground. My officer here [Covey] tells [Roberson] to drop his gun, and I'm telling [Covey] that [Roberson is] working with us."

"Cool out, he's working with us," he recalled telling Covey. "[Covey] shot him four or five times after we told him he's with us… Do you not see us with these vests on, bro? Why would I have a vest on, bro? This s**t isn't for fun."

Witnesses also told police that Roberson had detained the club shooter outside the lounge, and had been waiting for police to arrive at the scene so that they could detain the individual.

​Although the recordings don't show the exact moment that Covey discharged his firearm, they do show Roberson's lifeless body lying in the parking lot. In some frames, first responders can be seen performing chest compressions on Roberson.

The Cook County Sheriff's Office, which is leading the investigation into the bar shooting, said in a statement that it opted to release the recordings "in the interest of transparency" and in accordance with state law. No charges have yet been filed in the incident.

Covey has been placed on administrative leave pending the state's investigation.

Republican Candidate for Illinois: We Need Someone to Fight for Common Folk