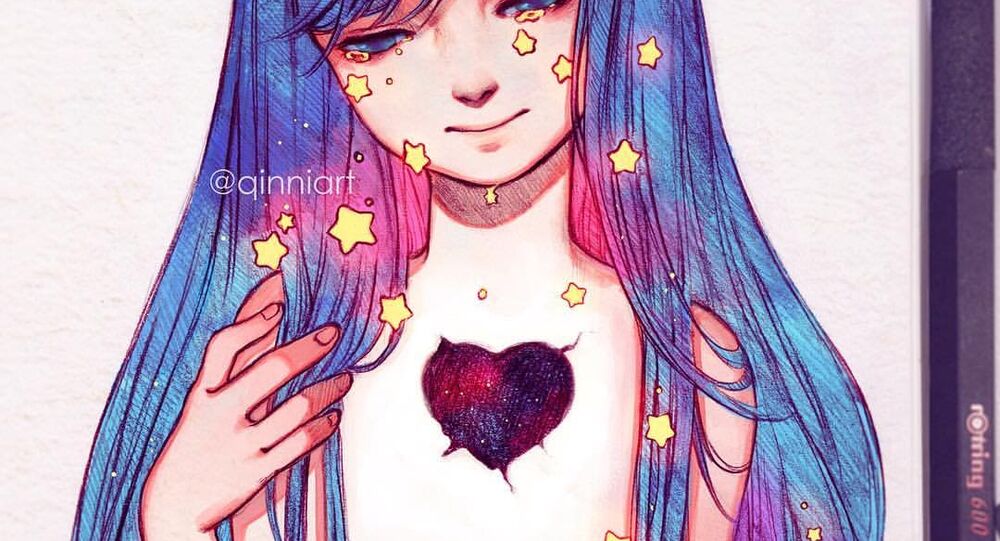 "My mom's preparing me for the worst and it's kinda all just happening at once.."

A professional young artist, whose works have won the hearts of millions, Qing Han is a survivor of four heart surgeries and is yet to put the demoralizing battle behind her.

Known by her nickname Qinni, the artist describes herself as a "professional doodler." Her works have evoked feelings in millions, while her artistic technique has won the hearts of fellow artists all over the world.

When in 2015 Qinni first shared the distressing news of her genetic heart condition on her Instagram account, thousands responded, concerned with the seriousness of her illness.

It's time…hammer time hahahaha. I wish I had some hammer time pants 😂😂. Just waiting for the doctor now.🍕🍝🍛. For those who don't know, I'm getting a heart procedure done today! Lots of waiting around rn tho…

In the next three years, the artist would go through the ordeal of more surgical intervention. Up to date Qinni has undergone through four open heart surgeries. During her numerous times in hospitals, recovery and treatments, she never fully stopped expressing her fears and pain through art.

On Wednesday, Qinni shared a doodle she initially created for herself, portraying a crying girl with a gaping hole in her chest.

In this post, many of Qinni's supporters were heartbroken to find out, that her mother was also battling a health condition.

Her "white blood cell count lowered but she still insists on working," the young woman said.

One misfortune came up on the back of another for Qinni, as she also described her concerns over her grandfather's health, saying his "tumor "had migrated."

Her grandfather's condition might see the young artist traveling to China in the nearest future to see him — all while dealing with her life-threatening heart condition.

Because her illness is so unusual and her scar is still growing, Qinni's doctors recommended she attends a clinic in the US. She, however, had to consider the high cost of medical treatment in America.

"..and US medical fees are so much I dunno if I'd wanna go or just die and save some money for my aging parents," she pondered.

Throughout her ordeal, the young artist has been sharing the most sincere and bold emotions with the world. She had published an honest photograph of her keloid scar and spoke of the slow and frustrating process of healing. Her illness has left Qinni traumatized, stirred the worst fears in her heart and mind.

"My rehab doctors are setting me up with a psychologist so hopefully I won't feel like shit every time I see my reflection anymore," she said, adding how depressed the open heart surgery has left her.

Edit: thank you guys for all your messages. I'm getting better at accepting this, though the scar is actually getting bigger and developing a keloid scar, like I feared. But I've gone to a dermatologist to get this treated, so hopefully it'll be okay. This isn't just a physical scar; to me, it's also mentally reminding me of what happened, which still traumatized me a bit (like how I can't watch shows with hospital scenes in it anymore). But I'm trying. 嫁不出去了啊😭😭😂. (Jk) I'm not sure if I'll keep this here since I'm still trying really hard to come to terms with my body after this. But stewing on it and sobbing about it doesn't seem to help so I'm gonna try complaining on the interwebs xD. You can literally see the 2 out of the 3 times I had surgery (the edge of the incision is always bigger). I made the mistake of looking up scar healing info on Google and found some really scary open heart surgery scars that got really bad after the scar matured so now I'm super freaked out about this developing into a keloid scar 😩. Never look up medical stuff on Google guys. Lol. I can't wear half my cloths anymore 😭😭. My rehab doctors are setting me up with a psychologist so hopefully I won't feel like shit every time I see my reflection anymore. But apparently 2/3 women get depressed after open heart surgery so at least I'm not a minority in that regard? 😆

Through her continuous work, Qinni has drawn attention to challenges faced by people on a daily basis around the world, as many recognized themselves in her struggle.

"You captured how I felt when my Mom died. Thank you so much," wrote one supporter.

Another wished her to "stay strong." "We all love and support you," they added.

Qinni has called on her followers to show support and donate on Ko-fi, a platform that allows artists to receive financial contributions from fans of their content. If you'd like to show your support for the brilliant artist who has captured the minds and imagination of art lovers around the globe, you could send a positive message or share Qinni's hard-hitting story online with the hashtag #SupportForQinni.