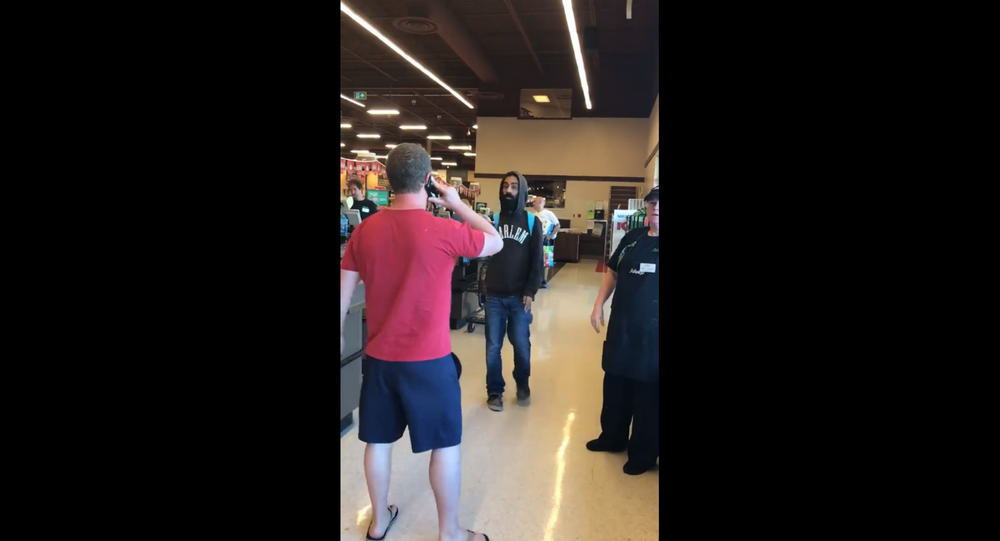 A Canadian man at a North London, Ontario, Sobeys grocery store was reprimanded Tuesday by officers from the London Police Service after he decided to make a citizen's arrest against another shopper wearing a hoodie he referred to as an "illegal alien."

Footage shared on Facebook by user Katie Pocasangre Montoya on Wednesday shows the Canadian man repeatedly blocking the shopper from leaving the establishment as he's on the phone with London Police.

After a friend steps in, telling the man that he cannot make a citizen's arrest, he then decides to push the man in the black hoodie back toward the store's check-out lanes.

"I want to leave," the shopper continues to say as he's being blocked from the exit. "Stop assaulting me, I want to leave." The video cuts off as the frustrated man is seen trying to get around his detainer.

© CC0
Are They Nuts?! Family in Canada Caught on Video Hand-Feeding Bear Mum and Cubs (VIDEO)

Although the recording doesn't show any of the store employees trying to defuse the situation, Sobey's spokesperson Jennifer McCrindle told Sputnik News that staff had acted by calling police.

"These situations are downright scary for our store teams and customers," McCrindle said. "What is not apparent in the video is that an employee had already called 911 at the time the video was being captured, and the team is waiting for the police to arrive."

"The Manager in charge at that point in the evening was called to the scene quickly and did her best to be present and to remain calm with the two men as the police were on their way to the store. She asked the aggressor to leave the store repeatedly, while also very aware that a situation like this can escalate quickly with an agitated individual," she continued.

"This incident is not reflective of the welcoming store experience we work hard to create for families, communities, and our employees. Sobeys takes a family-based and inclusive approach to everything we do, and that means taking care of each other and the customers who shop with us, with respect and integrity."

The London Police Service revealed in a Thursday statement that the recorded altercation followed a prior incident in the store in which the two men had engaged in an argument, though it's not clear what prompted the conflict.

Noting that both men ultimately left the store without further incident, the statement revealed that before allowing the man in the red to leave, officers warned him about his behavior. According to police, the targeted man chose to not file any charges.

Presently, the incident is being reviewed by the department's Hate Crime unit.