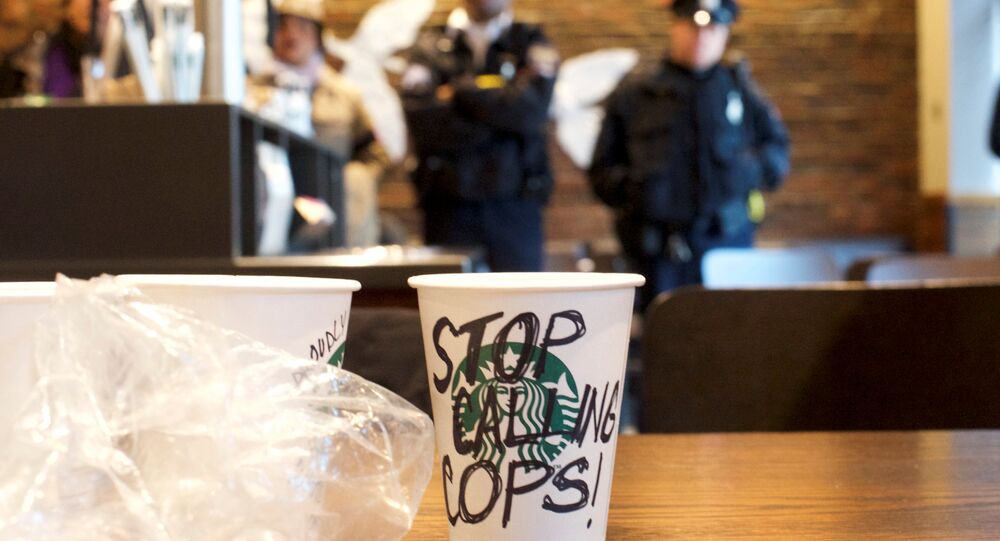 Days after two black men were arrested for sitting at a Philadelphia Starbucks on Saturday, dozens of protesters descended on the coffee shop to protest the incident.

Packing into the store with posters criticizing Starbucks' misstep, protesters were heard chanting, "Starbucks coffee is anti-black" and "A whole lot of coffee, a whole lot of whack."

​Aside from chanting, protesters also called on present staff to release the name of the store manager who made the call to the Philadelphia Police Department about the two customers, who were waiting for a friend before placing their order.

​Abdul-Aliy Muhammad, one of the protest's organizers and co-founder of the Black and Brown Workers Collective, told AP that the goal of the demonstration was to keep that Starbucks from "making any money."

Protesters gathered in the rain on Monday outside the establishment before 7 a.m. local time before moving indoors.

​According to USA Today, Starbucks' regional vice president, Camille Hymes, was present at the location but was unable to speak with demonstrators as she kept being shouted down.

The bubbling outrage grew over the weekend after video footage of the two men being arrested surfaced on social media. Within hours, netizens called for a boycott of Starbucks under the hashtag #BoycottStarbucks.

In response to the backlash, Starbucks CEO Kevin Johnson released a statement, calling the incident "reprehensible."

"We have immediately begun a thorough investigation of our practices. In addition to our own review, we will work with outside experts and community leaders to understand and adopt best practices," Johnson stated. "The video shot by customers is very hard to watch and the actions in it are not representative of our Starbucks mission and values. Creating an environment that is both safe and welcoming for everyone is paramount for every store."

"Regretfully, our practices and training led to a bad outcome — the basis for the call to the Philadelphia Police Department was wrong. Our store manager never intended for these men to be arrested and this should never have escalated as it did," he added.

Though the men were arrested for trespassing, the charges were later dropped after officers were informed that Starbucks was "no longer interested" in pressing charges.

A company spokesperson told the Philadelphia Inquirer that the unidentified manager has left the company. The separation was deemed a "mutual" decision.