Dino Sale: $2 Million Allosaurus to Be Auctioned Off at Eiffel Tower (VIDEO)

If you've ever wanted to own a dinosaur skeleton, it's time to start collecting your nickels and dimes, folks.

French auction house Aguttes announced that it's officially putting a dinosaur skeleton up for sale on June 4, 2018, in Paris. Measuring in at 29 feet long and constituting roughly 70 percent of a complete skeleton, officials have determined that the dino could fetch up to $2.2 million, Reuters reported.

Though experts have noted the dinosaur is likely from the Allosaurus group, which is a genus of large theropod dinosaurs that date back to the Jurassic period, several bone structures have left officials weighing the idea that their specimen might actually be a new species or genus.

The skeleton is currently on display at the Gare des Brotteaux in Lyon, France. However, officials will be transporting the bones to the Eiffel Tower prior to the auction. The skeleton will be on full display on the first floor of Paris' historic tower for the sale.

"[I have been] keen on fossils for as long as I can remember; I have traveled the world visiting fossiliferous sites, haunting museums and attending specialist events," Eric Mickeler, a paleontologist who advises Aguttes, said in a press release. "I have worked as an expert for almost 20 years, for auction houses like Aguttes, Christie's and Sotheby's, as well as governments and big international collectors." 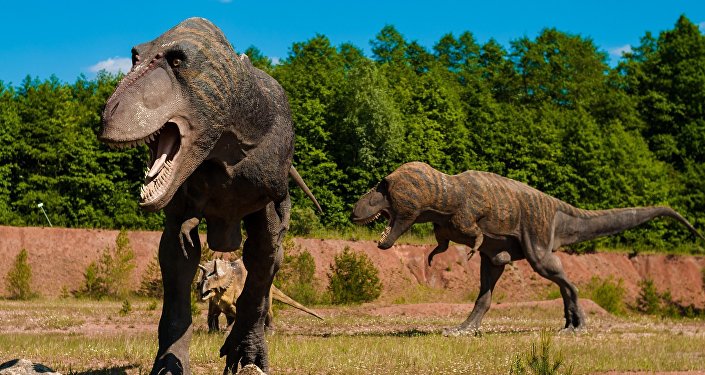 "I have examined and valued many important paleontological species and it is a real privilege to have been involved in the examination of this theropod dinosaur of a hitherto unknown species, a discovery, I am sure, that is destined to make its mark," he added.

Interestingly enough, aside from bidding in euros, potential buyers also have the option to pay in bitcoin.

The dino was found in the Morrison Formation in Wyoming in 2013. It is currently owned by a British businessman, according to reports.