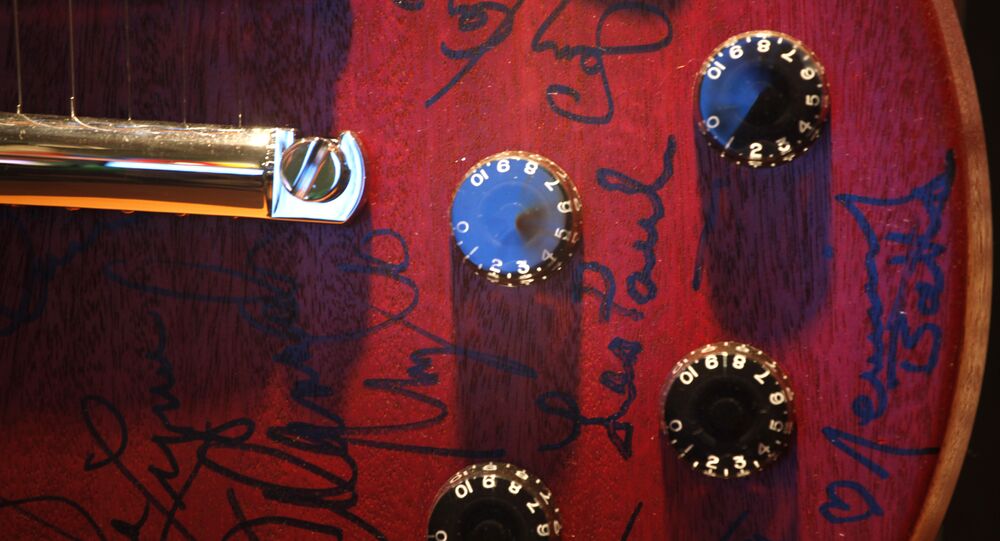 The intellectual property rights of another US icon of popular culture is in danger of going under the auction gavel, as poor management tactics see the famous Gibson Guitar brand about to go bankrupt.

According to several reports, Gibson Brands, Inc., the owner of those instantly recognizable Gibson guitar models including the iconic solid-body Les Paul six-string favored by much of the electric guitar world, lost its latest CFO after less than a year on the job while concurrently making a paltry 4-percent payment on some $375 million due to be paid off to investors, according to the Nashville Post.

In a brief statement made one week ago, the beleaguered company — in business since 1902 — reported, "Gibson Brands, Inc. today announced that the company made a $16.6 million coupon payment to holders of its $375 million, 8.875% senior secured notes due 2018."

The business-as-usual tone of the statement cannot hide that one of the world's most famous guitar companies is in deep financial trouble.

With annual revenues in excess of $1 billion, the Tennessee-based company lost CFO Bill Lawrence less than a year after he was hired and less than half a year until the $375 million investment package requires full repayment. To make matters worse, an additional $145 million in regular bank loans will come due immediately if the 2013-issued $375 million is not paid — or at least refinanced — by July 23 of this year.

Business observers note that prospects for the financial health of the company that owns the famous brand looks grim, while any alternative scenarios — beyond straight-up failure and restructuring under bankruptcy laws — would require that longtime owner and CEO Henry Juszkiewicz depart the company.

"This has been a long time coming," a reporter with Debtwire said, cited by the Nashville Post.

"Someone will take control of this company — be it the debtors or the bondholders," the reporter added.

Senior Moody's Investors Service credit officer Kevin Cassidy detailed three options open to CEO Juszkiewicz: renegotiate the debt coming due; give up some of his own equity stake, or see one of the most recognized brands in the world in bankruptcy court, according to the Post.

"This year is critical and they are running out of time — rapidly," remarked Cassidy, adding, "if this ends in bankruptcy, [Juszkiewicz] will give up the entire company."

Execs at the Gibson company have not made themselves available to comment, according to the paper.

Parent company Gibson Brands has been dumping real estate, but the amount realized through the sale of buildings and land is not nearly enough to defray the hundreds of millions of dollars owed to investors.

As a publicly-held company, Gibson must report next week its fiscal third quarter numbers to stakeholders, and industry observers are not hopeful, with many noting that Juszkiewicz is in for some difficult negotiations.

The core manufacture and sale of the many models of Gibson guitar are "a very stable business, and a sustainable one," offered Cassidy, but, he pointed out, "some type of restructuring will be necessary," cited by The Post.

The iconic Gibson Les Paul, favored by some of the most famous electric guitarists in the world including Jimmy Page of Led Zeppelin and Slash of Guns N' Roses, was first offered for sale in 1952, quickly becoming a cornerstone in rock music. The company offers several other well-known guitars, including the SG (favored by Malcom Young of AC/DC), the Explorer (played by U2's The Edge) and the Firebird (made famous by blues player Johnny Winter) as well as many other lesser-known but highly-prized instruments.

Guitar Heroes and Disco Dancers: World Politicians and Their Hobbies