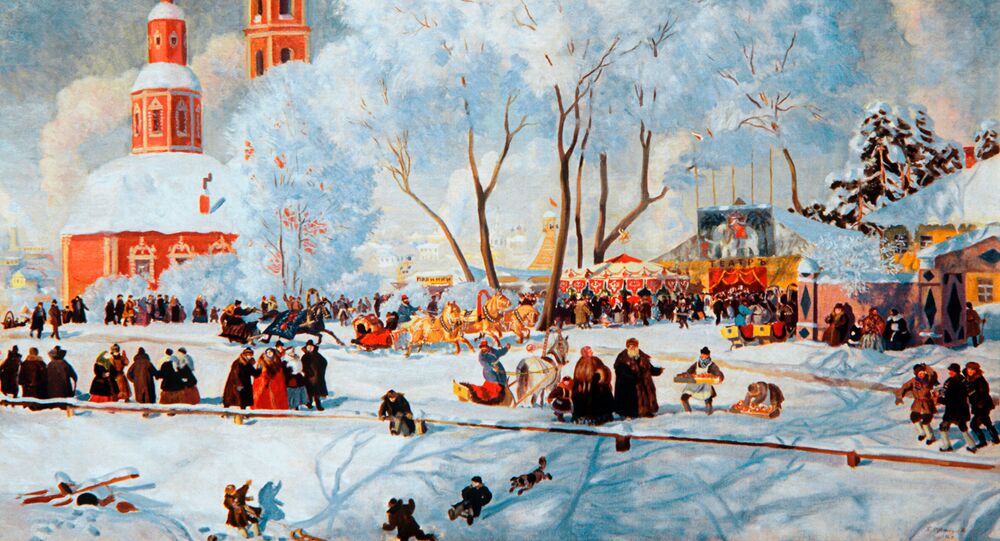 Maslenitsa festivities were really large-scale ones, exactly like during the Yuletide season. People traditionally spent the first half of the so-called "cheese week" at home, while they engaged in a real mass saturnalia, starting from Thursday on.

Since Maslenitsa is a festive winter holiday, like Christmas, its most characteristic feature was horse riding, for people of every socio-economic standing. In Moscow it was common to take a route from Red Square to what is nowadays Elektrozavodsky Bridge (then — Pokrovsky) or, alternatively, round the Kremlin and Red Square, freed from traffic during the festive occasions.

© Sputnik / Vladimir Vyatkin
The celebration of Maslenitsa in Suzdal

There were much more daring events going on in the suburbs as Russian "troykas" (three-horse teams) were boldly sent into a gallop, to loud singing and whistling. This is the way humble countryfolk entertained themselves.

One would by all means see plenty of sledding hills and Maslenitsa swings – in private households these were low enough, about 10 meters long. In public places the hills reached 20-30 meters in length. "These structures were assembled and then maintained by a specially trained group, which supervised mass public rides and assisted if needed," Vera Bokova noted.

Riding sleighs were small enough, the size of a contemporary kids’ sled. People rode basically in pairs: a woman sat at its front, while a man took a backward seat. One was supposed to push their body as far back as possible, then stretch their legs and raise them up.

Sledding hills were constructed right on the icy Moskva River, in the early 19th century – by the Kremlin walls, beside Neglinnaya Street. On the city’s outskirts, hills could be found in Devichye Field  (now a park area), in today’s Lefortovo and near where the Moscow Zoo is located today, in Presnya.

The swings were of different kinds, the ones that swayed to and fro like a merry-go-round, as well as the ones resembling a panoramic wheel with four, manually movable cabins.

Pancake tents and pavilions, equipped with furnaces and stoves, were scattered throughout Moscow, inviting guests to help themselves to a pile of freshly fried, buttered  and flavorful pancakes. Pavilions served as out-of-door eateries that one could drop into and grab a pancake and a glass of Medovukha  (a honey-based alcoholic drink) or Kvass (another typically Russian beverage, made of bread).

In the street pancakes were traditionally sprinkled with sugar, whereas at home they were served with caviar, sour cream, fish and what not.

Interestingly, cutting a pancake into pieces was thought to bring about bad luck, so one was supposed to eat the whole thing up in one bite. And Maslenitsa feasts could last for days, one meal closely followed by another one.

Once tired of eating, guests could switch on to a more nerve-rattling occupation, like for instance seeing cannons being fired, or engage in street fist-fighting tournaments.

© Sputnik / Evgenya Novozhenina
Participants in a wall-to-wall fist-fighting during Maslenitsa celebrations in the "Kremlin in Izmailovo" Russian culture center, Moscow

Booths and buffooneries were also an indispensable part of Maslenitsa festivities. These offered plenty of variety shows, slapstick comedies and spectator performances, which came one after another all day long. The themes were mainly derived from folklore or Russian military history.

"For instance, one of the most favorite scenes was historic clashes between Russians and Kabardians (Kabardino-Balkaria is a republic in southwestern Russia). Brave General Skobelev, played by a professional actor, went out on stage and addressed the audience; next came a round of cannon shots," Vera Bokova said.

And this is to say nothing of a wealth of Maslenitsa minstrel shows, involving both professional and amateurish actors.

In less sophisticated buffooneries, frequented by common citizens, the most typical themes covered in performances were all types of miracles and so-called "yurodstvo", literally "foolishness for Christ’s sake."

For instance, a mermaid in a glass box, an albino, an Afro-American giant, or a bearded woman could cause a storm of applause, from both commoners and educated society.

There were a lot of cheaters though, who took money literally for nothing, Bokova remarked. For instance, a crowd of people were locked in a room with all the lights off, with organizers telling them they were shown… "Egyptian darkness" (the unusual darkness which fell on Egyptians in one of Exodus episodes to punish them for having refused to free the Jews). The public felt conned, but still remained intrigued and after the performance was over, advised others to go and see it, Vera Bokova remarked.

Ans most surely, one of the most spectacular shows was the burning of so-called "Lady Maslenitsa" effigies that represent winter. This is traditionally viewed as a Pagan custom to say farewell to the cold, frosty season.

According to the Orthodox tradition, Pancake Week in Russia ends with Shrove Sunday, after which 40-day Great Lent kicks off.