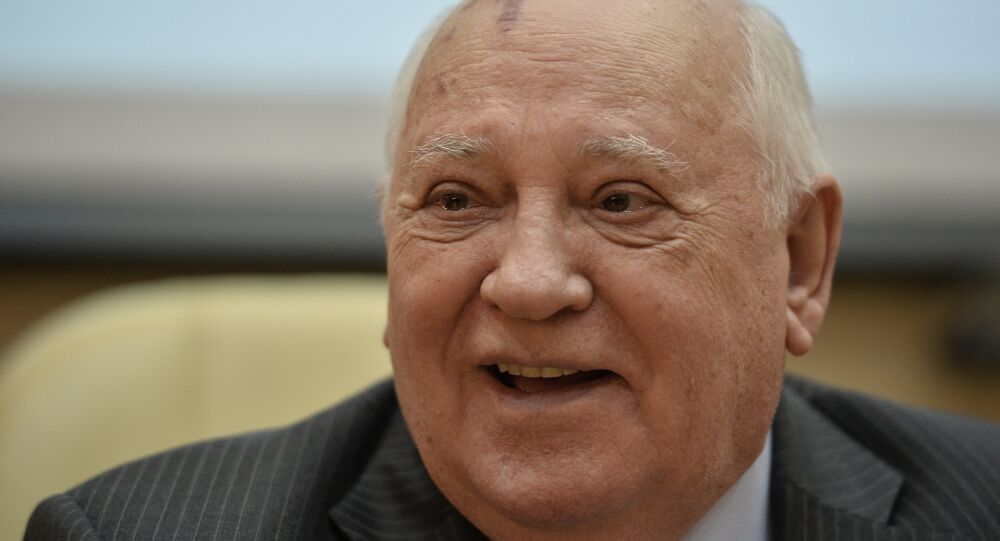 Mikhail Gorbachev: 'I Won't Leave Country For the West'

Mikhail Gorbachev presented his new book titled "I remain an optimist" in one of Moscow's major book stores on Tuesday. Amid the presentation, the former president of the Soviet Union shared his thoughts on Perestroika's impact on the country and compared the current situation in Catalonia with that in the USSR on the eve of its collapse.

MOSCOW (Sputnik) — Mikhail Gorbachev admitted that his new book was a "mishmash," which comprised his memoirs of historical events scattered across a wide time frame, as well as featured some ideas mentioned in his previous writings.

"I won't leave the country for the West, I'll keep living in Russia," Gorbachev said during the presentation, commenting on the question, which implied that the former USSR leader was more popular abroad than in his home country.

© Sputnik / Sergey Guneev
Forbes Places Putin, Gorbachev, Gagarin Among 100 Most Influential Russians
Some of the visitors asked Gorbachev if he felt guilty for initiating the Perestroika policy, which launched a series of democratic reforms in the Soviet Union, and arguably led to its collapse. The Soviet president said that his views on the Perestroika were mostly positive.

"Thanks to the fact that it [the Perestroika] happened, and despite the fact that it was disrupted and kicked about later, it gave such an impetus both to our country and our people, it set the whole world in motion," Gorbachev insisted.

Mikhail Gorbachev was also asked to draw parallels between the situation in modern Spain and the events in the Soviet Union prior to its collapse.

"We have several 'Catalonias' and we will have to deal with this and we should do this. We must know our history and make conclusions from this," Gorbachev answered a visitor's question.

© Sputnik / Ramil Sitdikov
Gorbachev Calls for End of Confrontational Rhetoric in US-Russia Ties
Gorbachev held the highest rank in the Soviet Union between 1985 and 1991, becoming the first ever and the last president of the USSR in March 1990, as the country dissolved into a number of independent states in 1991. He unsuccessfully ran for president of Russia in 1996. In 1990, Gorbachev was awarded the Nobel Peace Prize for his leading role in the process that led to the collapse of the Soviet Union.

The Perestroika, which literally translates as "restructuring," was a political movement within the Communist party of the USSR initiated by Gorbachev during the late 1980s aiming to restructure the Soviet economy and its politics via a series of democratic reforms.

Gorbachev Calls for End of Confrontational Rhetoric in US-Russia Ties

Gorbachev: Russia, US Should Do Away With Tensions in Bilateral Relations