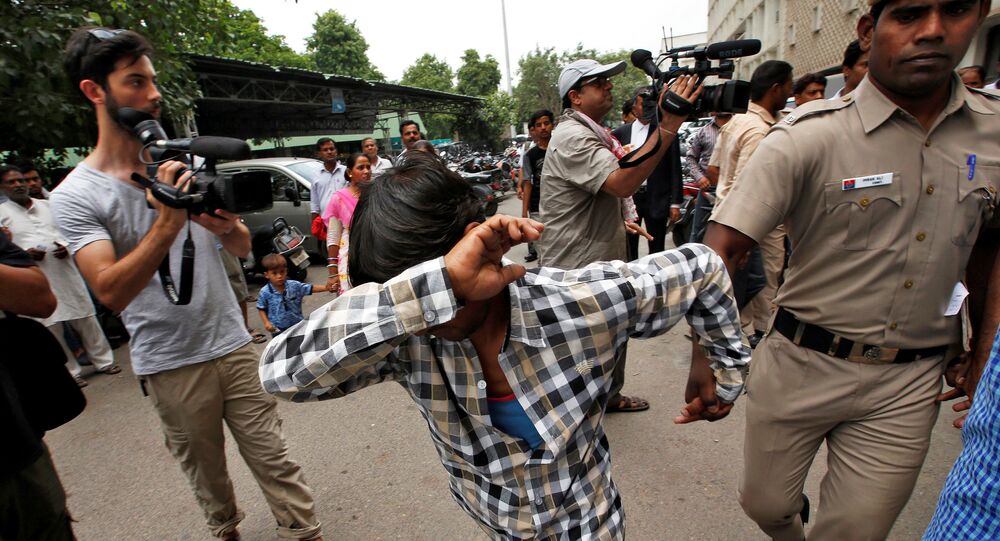 A Delhi court sentenced five men to life imprisonment following their conviction of the gang rape of a 52 year old Danish tourist.

NEW DELHI (Sputnik) — The incident took place in Delhi in January 2014 after the victim got lost on her way back to her hotel.

Pronouncing the order, additional sessions judge Ramesh Kumar said, "For the offence of section 376D of Indian Penal Code, all the convicts are sentenced to life imprisonment."

​The court has also imposed fine of $1,541 on all five of the convicted. They have been pronounced guilty on counts of gang rape, kidnapping, violent robbery, wrongful confinement, criminal intimidation and common intention.

© AP Photo /
UK Screens Delhi Gang-Rape Film as India Calls for Worldwide Ban
Apart from these five persons, three minors are also allegedly involved in the case, and criminal proceedings against them are underway in the juvenile court of Delhi.

The conviction was largely based on the accounts of a security guard who was an eye witness to the incident. The security guard identified the accused in the court.

After registering the case, the victim returned to India in July 2015 to record her in-camera testimony before the trial court. She identified six accused in the court while she failed to identify three juveniles. The sixth person died in February this year.

Life imprisonment for the rape of Danish women,by Indian standards the judgment is fast. Nationality is imp here, Nirbhaya case is still on.

​The Indian judiciary is notorious for its slowness, but this case appears to be an exception which twitter has certainly noted.