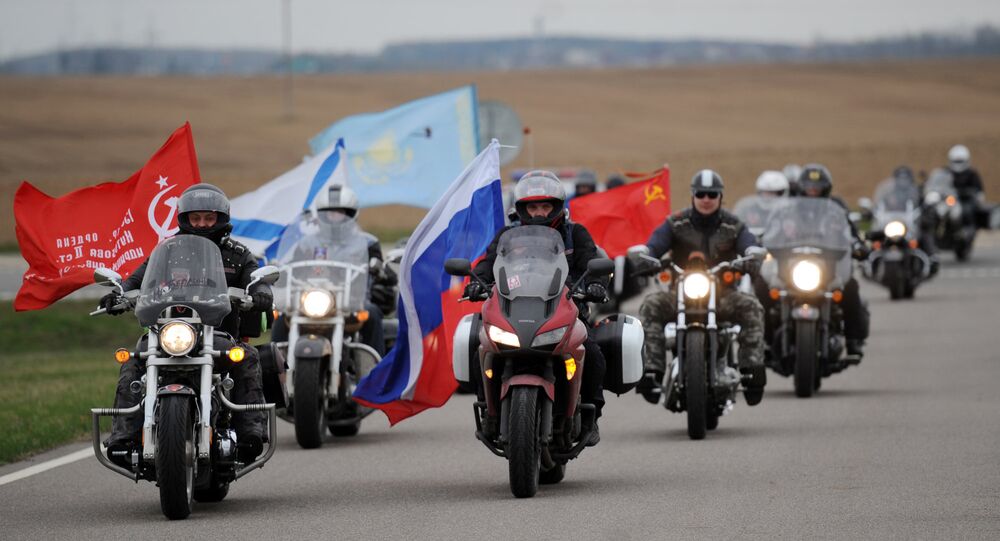 Several hundred bikers, all members of the Night Wolves club, arrived at the Polish border town of Terespol earlier on Monday. After being searched, Polish border guards denied the bikers entry, claiming their visas were incorrectly filled out.

Dariusz Sienicki, a spokesman for the Polish border guards, said:

"These people will not cross into Poland. Each of them will receive a separate refusal."

The rally to mark the 70th anniversary of the Soviet victory over Nazi Germany started Saturday in Moscow: about four dozen Night Wolves members had planned to visit several European countries before finishing the journey on May 9 in Berlin, laying flowers at the monument for Soviet soldiers in Treptow Park.

© AFP 2021 / BARTOSZ SIEDLIK
Polish Bikers Resolve to Ensure Safe Passage for Russia's Night Wolves
According to Polish media, the guards at the border crossing in Terespol were looking for the logo of the Night Wolves, while checking the documents so that the Russian bikers are not able to enter Poland like ordinary motorcyclists.

About 60 bikers from the Polish "Katyn" motorcycle club have blocked the Terespol border crossing Monday in protest against the decision of the Polish authorities to deny the Night Wolves entry.

The Night Wolves have returned to the Belarusian city of Brest after they had been banned from entering Poland on Monday.

© Photo : Courtesy of "Night Wolves"
Changing Russian Bikers’ Victory Day Route to Berlin Means Giving Up on History – Night Wolves' Head
On Friday, the Polish Foreign Ministry officially banned the Night Wolves from entering Poland during their planned trip to Berlin citing a lack of details on the planned activities of the bikers, their exact travel routes as well as the location of their nightly rest stops.

However, the leader of the Night Wolves, Alexander Zaldostanov, said that the motorcycle club would not change the route of their Victory Day ride and would cross the Polish border separately and in different places as they were not allowed to enter the country as an organized group.

He did not specify the exact number of canceled visas, but noted that they "can be counted on the fingers of one hand."