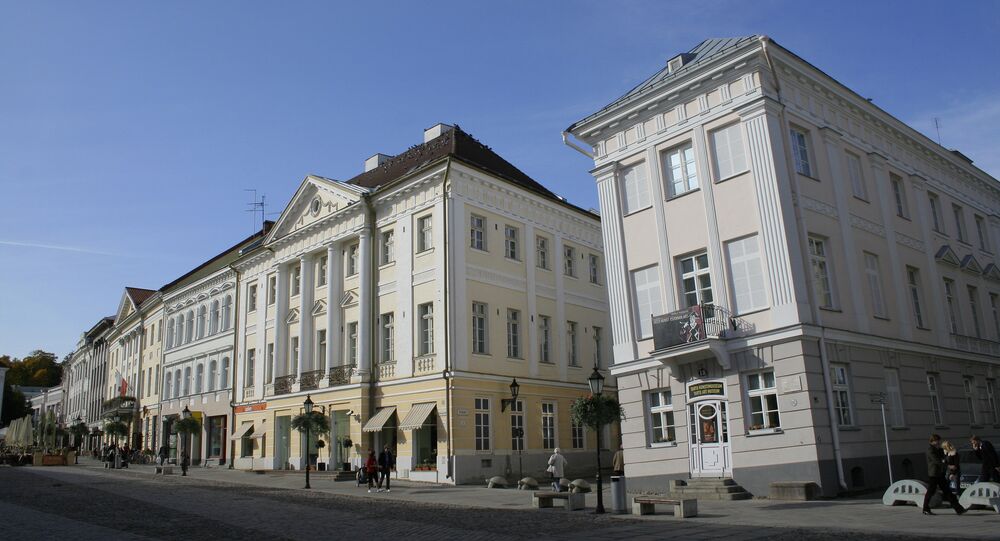 A scandalous art exhibit opened in the Estonian city of Tartu over the weekend, featuring comics, paintings and video projects by Polish artists offering a 'humorous' treatment of the Holocaust.

A piece of film art by the artist features naked people happily playing tag in the gas chambers of Auschwitz. Another shows what appears to be a former inmate of the infamous concentration camp deciding to update the serial number tattoo on his wrist.

A painting at the opening of the exhibit features people in a car driving in what appears to be Hollywood, but the iconic white letters of the 'Hollywood' sign are replaced with the word 'Holocaust.' The Estonian Academy of Arts features a black and white photo advertising the event meant to resemble the famous images of concentration camp survivors behind barbed wire, except featuring mostly smiling, happy, well-fed people.

© Sputnik
Latvia Makes 'Absurd' Decision to Ban Holocaust Exhibition
The traveling Polish exhibit, titled "My Poland, Remembering and Forgetting," is said to have been conceptualized as a way to get over the trauma of the Holocaust through laughter. Exhibit coordinator Julia Poluyanenkova explained that the use of "humor and irony is one of the ways to get over the trauma. This exhibition is not about the events themselves, but an attempt to understand how we, a generation living after [the Holocaust], are trying to deal with the trauma."

Tartu Art Museum curator Raelya Artelya notes that "living in the modern world, we have to ask ourselves not about whether we should talk about concentration camps, but how we should talk about them. How can we deal with the memory of unpleasant moments in history without forgetting them?"

The exhibition, opening on Saturday and running until the end of March, has already led to an outcry among local residents, including from Tartu's Jewish community. "There is nothing fun or ironic about the Holocaust," said community member Roman Smushkin, as quoted by Russia's RIA Novosti. "This is a tragic topic. Humor does not belong here," he said.

© Sputnik / Valeriy Melnikov
Polish, Russian WWII Interpretation Differs Despite Common History
Vladimir Simindey, historian and director of the 'Historical Memory Fund' expressed his outrage over the exhibition. Rossiyskaya Gazeta quoted him as saying that "it is not by accident that Polish artists speculatively giggling over Jews and other victims of Nazism found 'shelter and bread' in the Estonian city of Tartu; this is one of the centers of neo-Nazi sentiment in this country. The Visiting scandalists delight Estonian Neo-Nazis and their sympathizers, given that previously even they themselves did not dare to show their hatred in such an 'artistic' manner. This [exhibition] serves to demonstrate a kind of 'liberation' from the uncomfortable memory of complicity of some Tartuans in the terrible Nazi atrocities. Now it's just become a joke for them."

The Polish artists featured in the exhibition have previously participated in the Venice Biennale contemporary art exhibition.