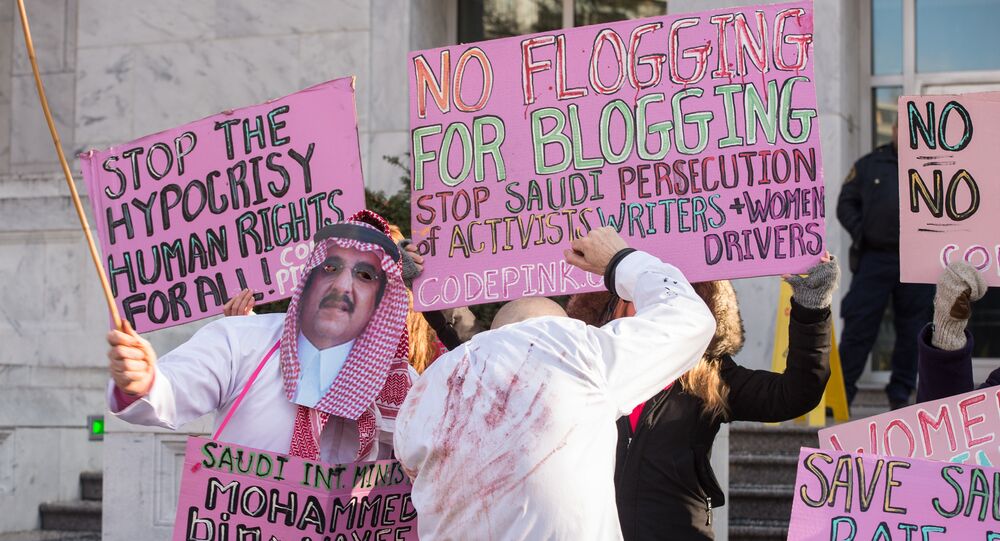 Just How Far Should Bloggers Be Protected From Criminal Prosecution?

New technologies have provided people with unprecedented opportunity to express themselves freely. However, many bloggers are facing sharp criticism and even criminal prosecution for the ideas they share.

© AFP 2020 / MOHAMMED AL-SHAIKH
HRW Calls on Europe to Stand Up for Rights of Bahrainian Blogger
MOSCOW, January 22 (Sputnik), Ekaterina Blinova — The new media revolution is creating a myriad of alternative sources of information and unprecedented opportunity for freedom of speech and expression; however, many bloggers are facing fierce criticism and even criminal prosecution for the ideas they decide to share.

The public flogging of Saudi blogger Raif Badawi has triggered outrage across the world. Badawi, 31, was sentenced to ten years in prison, 1,000 lashes and fined one million Saudi riyals ($270,000) for running "The Saudi Free Liberals Forum" website and discussing religious and political matters in the kingdom.  He received 50 lashings on a public square in Jiddah on January 9. The video of the punishment, leaked onto YouTube, showed the man flogged on a square outside a mosque with a crowd of several hundred applauding the punishment and shouting "Allahu Akbar" (God is great), the Guardian reports. Badawi was due to receive 50 lashes every Friday for 20 weeks, however, the latest medical examination indicated that the blogger would not be able to withstand the next round of the punishment. In accordance, the planned flogging has been temporarily postponed by Saudi authorities.

The Guardian cites some of Badawi's posts published on his site, raising the question whether the cruel punishment fitted the blogger's "crime."

© Flickr / UN Geneva
UN Human Rights Chief Urges Saudi King to Stop Flogging of Atheist Blogger
"As soon as a thinker starts to reveal his ideas, you will find hundreds of fatwas that accused him of being an infidel just because he had the courage to discuss some sacred topics. I'm really worried that Arab thinkers will migrate in search of fresh air and to escape the sword of the religious authorities," one of the extracts published on August 2010 read.

"States based on religious ideology… have nothing except the fear of God and an inability to face up to life," the other peace said.

Meanwhile in Singapore, blogger Alex Au Wai Pang, 61, was found guilty on Thursday, January 22, for "undermining public confidence in the administration of justice in Singapore." Wai Pang, also known by his Internet alias "Yawning Bread" is an active member of the Singapore gay equality movement. The blogger ran a web site where he published analysis on Singaporean policies, cultural life and gay issues.

The Attorney-General's Chambers (AGC) stated that two articles published on the Yawning Bread blog in October 2013 were an unfair criticism of the Singaporean judicial system and qualified the blogger's articles as "baseless attacks against the authority of court," that crossed "the legal line," Channel NewsAsia reports. One of the Wai Pang's posts, highlighted in court, reads: "my confidence in the Singapore judiciary is as limp as a flag on a windless day." Bloomberg emphasizes that the man may face a jail sentence, a fine, or both.

Human rights organizations are standing up for bloggers worldwide, urging governments to respect the fundamental rights of freedom of speech and expression. However, some bloggers are facing legal charges not for their ideas and publications, but for evident breaches of the law, like Russian blogger Rustem Adagamov. Known for his criticism of Russia's political course, Adagamov has been placed on Russia's Federal wanted list. While trying to convince the public that he has been persecuted due to his tough political stance, prosecutors are actually chasing him for abusing his 12-year-old stepdaughter based on a charge made by his wife.

The media revolution, that has provided the global community with so many communication technologies, is still colliding with state' rulings and social stereotypes. The freedom of speech seems to be limited by both legislation and traditions in many countries, including Western states. The question remains open as to whether it should be considered an absolute human right or must be exercised in accordance with local laws.