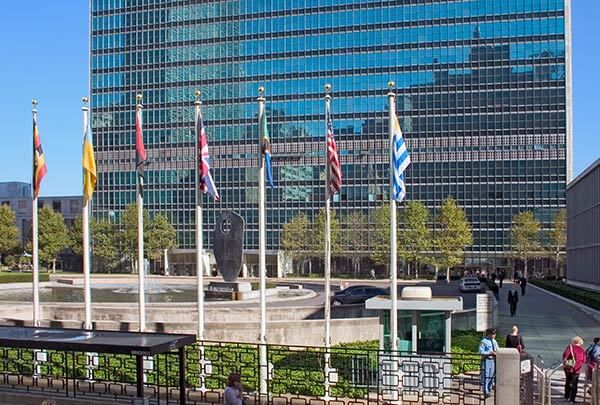 Convention on the Non-Applicability of Statutory Limitations to War Crimes and Crimes against Humanity was enforced 44 years ago by the United Nations.

MOSCOW, November 11 (RIA Novosti) — Tuesday marks the 44th anniversary of the United Nations enforcing the Convention on the Non-Applicability of Statutory Limitations to War Crimes and Crimes against Humanity, a document that lifted time limits on prosecution for the most serious violations of laws and customs of war.

On November 11, 1970, the Convention came into force in the Soviet Union following its approval by the UN General Assembly on November 26, 1968.

The document outlines the individual responsibility of persons who have committed crimes against peace, war crimes, or crimes against humanity and has been established by a number of acts in international law (declarations, treaties, and agreements); responsibility for certain types of war crimes (the killing of prisoners of war, violence against civilians) has also been established by the legislation of individual countries.

The UN Convention came in the wake of the 1942 Declaration of St. James's Palace that stipulated prosecution through organized justice with regard to those who are guilty of and responsible for these crimes, regardless of whether they were committed personally, on their orders, or with their complicity in any form.

The 1943 Moscow Declaration by the governments of the Soviet Union, the United States and the United Kingdom warned war criminals that "the Allied powers will pursue them to the uttermost ends of the earth and will deliver them to their accusers in order that justice may be done." Alongside the extradition of war criminals to the countries in which their crimes were committed, the Declaration established the responsibility of principal war criminals whose offenses have no particular geographical localization.

The issue of the responsibility of principals was finalized in an agreement made between the Soviet Union, the United States, Britain and France in London on August 8, 1945. The Potsdam Agreements (July and August 1945) reiterated that war criminals and those involved in the planning or commissioning of Nazi activities resulting in atrocities or war crimes must be arrested and tried.

On December 11, 1946, the UN General Assembly reaffirmed the principles of international law recognized by the Nuremberg Charter and that were manifest in the tribunal's verdict. However, none of these acts referred to the non-applicability of statutory limitations on war criminals.

In the mid-1960s, the issue that war criminals could not be prosecuted upon the expiry of statutory limitations was repeatedly raised in the Federal Republic of Germany, resulting in the adoption on November 26, 1968 of the Convention on the Non-Applicability of Statutory Limitations to War Crimes and Crimes against Humanity by the 23rd Session of the UN General Assembly.

Under Article 1 of the Convention, no statutory limitation applies to war crimes and crimes against humanity whether committed in times of war or during peace. The provisions of this Convention apply to representatives of the State authority and private individuals who, as principals or accomplices, participate in or who directly incite others to the commission of any of those crimes, or who conspire to commit them, irrespective of the degree of completion, and to representatives of the State authority who tolerate their commission.

The Convention was signed by the Soviet Union on January 6, 1969, and ratified by a decree of the USSR Supreme Soviet Presidium on March 11, 1969.