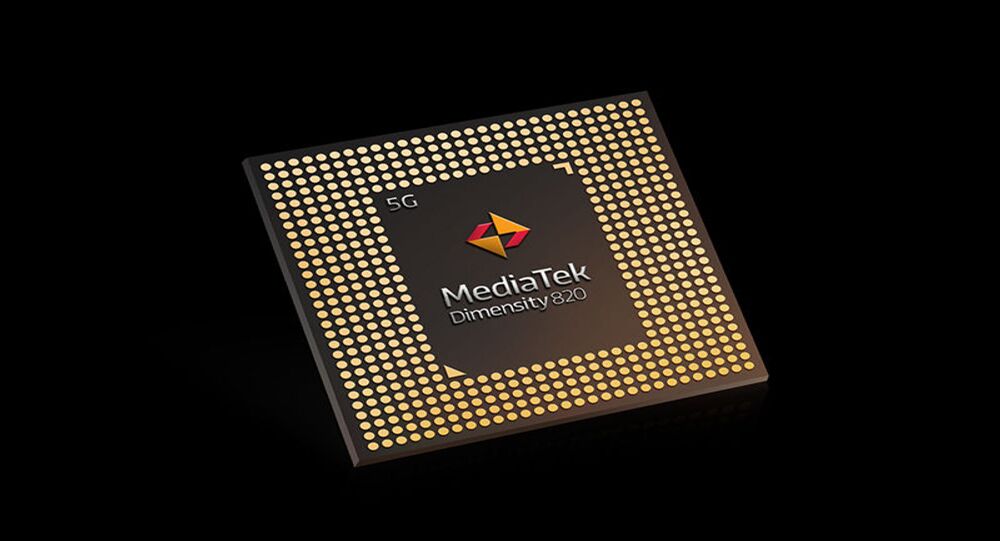 The news comes after the Taiwanese chipmaker surpassed US competitor Qualcomm in the smartphone market with record sales and shipments fuelled by the ongoing US-China trade war.

Taiwanese semiconductor firm MediaTek has revealed its latest processor in a bid to maintain its top standing in the global tech market, a press statement said on Wednesday.

The company's 5G chipset, the Dimensity 1200, was unveiled on Wednesday and boasts significant improvements across performance benchmarks.

"MediaTek continues to expand its 5G portfolio with highly integrated solutions for a range of devices from the high-end to the mid-tier,” JC Hsu, corporate vice-president and general manager of MediaTek’s Wireless Communications Business Unit said.

According to Mr Hsu, the Dimensity 1200 can support 200-megapixel cameras and artificial intelligence on mobiles, as well as boost "connectivity, display, audio and gaming enhancements".

© REUTERS / Mike Blake
Indirect Threats: What Does Nvidia's Buyout of UK Chipmaker Arm Mean For The Chinese Tech Industry?
The octa-core chipset will use UK chip designer Arm's Cortex-A78, boosting computing up to 3Ghz, including a nine-core graphics processing unit (GPU), and will also support Bluetooth 5.2 and ultra-low latency and longer battery life for audio.

The chipset is also based on Taiwan Semiconductor Manufacturing Company's (TSMC) 6-nanometre technologies.

The news comes shortly after MediaTek overtook US rival Qualcomm in the third quarter July to September, securing 31 percent of the global smartphone market compared with Qualcomm at 29 percent, reports found.

© CC BY-SA 4.0 / Padai / MediaTek
Chipmaker MediaTek Enlists Former US Official To Steer Firm Amid US Trade War, STAR Stock Surge
Former Huawei subsidy smartphone firm Honor announced in May last year it would seek out MediaTek 5G processors for its new smartphone lineup, adding it planned to strengthen its positive relationship with the Taiwanese firm in the future.

MediaTek is one of three companies capable of producing 5G modems along with Huawei's HiSilicon and Qualcomm.

HiSilicon was hit by outgoing US president Donald Trump's ongoing trade war with China, which saw dozens of Chinese tech firms such as Huawei, ZTE, and mainland chipmaker SMIC blacklisted on an US entity list in May 2019.