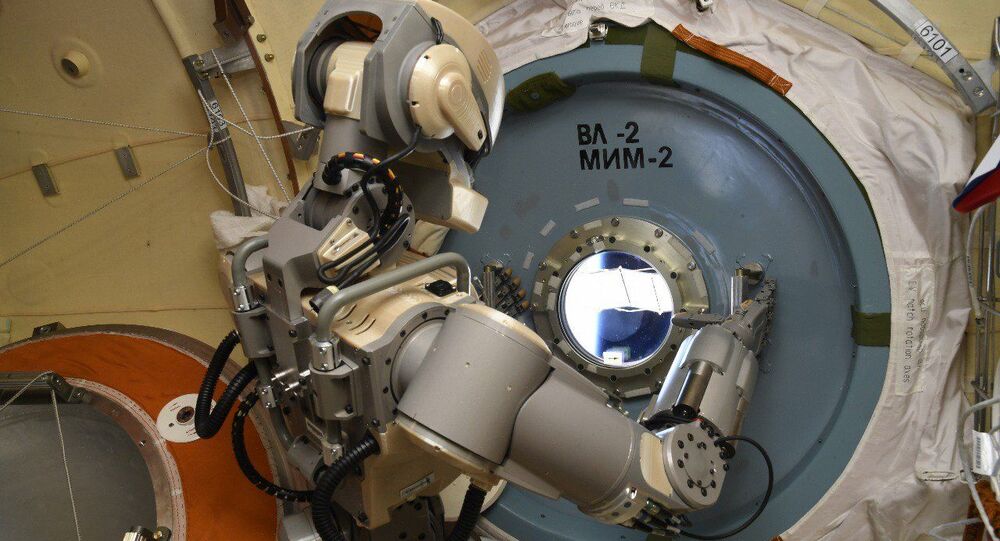 In September 2019, a minor air leak was discovered on the ISS that intensified fivefold this year, forcing the crew to close the space station modules’ hatches twice. In October, the crew fixed a crack on the Zvezda module that could have been the source of the air leak.

Humanoid robot FEDOR, also known as Skybot F-850, could not have caused a crack on the International Space Station as the cosmonauts had rehearsed their interactions with the robot dozens of times at a training centre back on Earth, its developer, Android Technics head Evgeny Dudorov, told RIA.

According to Dudorov, during the training, the cosmonauts transported FEDOR through two transfer hatches whose width exceeds that of the robot.

"The robot's maximum width is 550 millimetres, which means it can easily pass through all the hatches. We have repeatedly rehearsed this procedure in a Soyuz spaceship simulator", he said, dismissing claims that the robot could not fit in as "absurd".

A member of the Cosmonautics Federation of Russia, Alexander Khokhlov, earlier suggested that the fissure on the ISS could have appeared when FEDOR was being loaded into the Zvezda module.

The robot was dispatched to the International Space Station on 22 August 2019 for cosmonaut-controlled trials before returning back to Earth in September.

The Russian Zvezda module of the ISS has been experiencing an air leak since September 2019. In October of this year, cosmonauts detected and patched a crack that is believed to have been the source of the leak.

However, a new air leak has been reported in the module, which at present is not deemed critical.