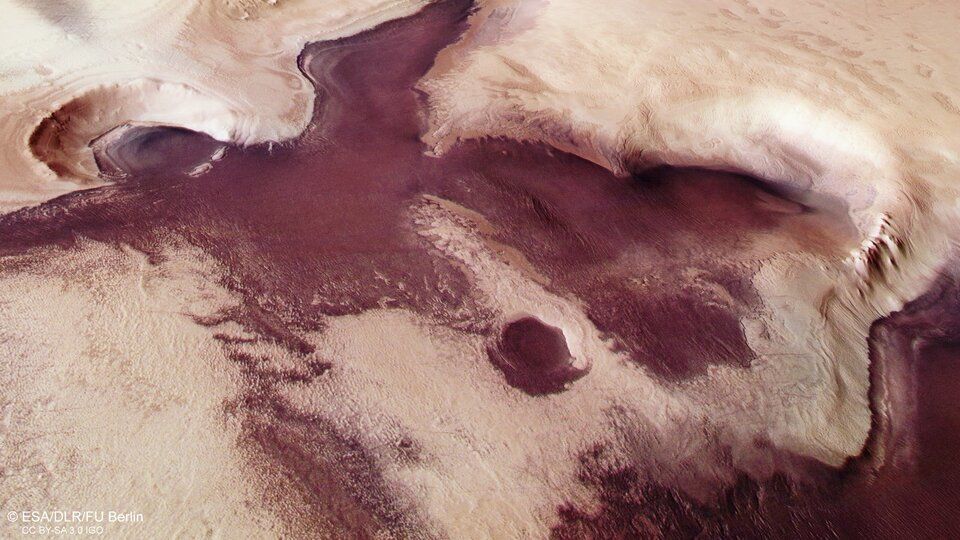 With one of the biggest holidays of the year rapidly approaching, everyone wants to get into the festive spirit. Everybody's favorite Christmas has many associated symbols, such as the fir-tree, mistletoe, egg-nog and, of course, that angel.

In a stunning new image captured by the Mars Express, the European Space Agency (ISA) spacecraft, and published on Thursday ice formations on the ground clearly look like an angel.

"Even our planetary neighbours are getting into the spirit", noted the space agency, when explaining the formation of the mysterious figure spotted near the south pole of Mars.

“The defined wings of an angelic figure, complete with halo, can be seen sweeping up and off the top of the frame in this image”, the space agency said in a statement.

Researchers also pointed out a large heart shape below the angel's 'wing', which together with the angelic silhouette sticks out of the "eggnog-coloured" surface of Mars. Explaining their bloody-red colour, the scientist said that it is a result of different types of sands in the area.

"These shapes appear to jump out of the light tan — or, in the spirit of the season, eggnog-coloured! — surface of Mars; their dark colour is a result of the composition of the constituent dune fields, which largely comprise sands rich in dark, rock-forming minerals that are also found on Earth."

© CC BY-SA 3.0 / ESA/DLR/FU Berlin
Topographic view of an angel and heart on Mars

The angel’s left hand is said to look as if it is stretched into a ‘sublimation pit’, which have also been seen on other planets in the Solar System, such as Pluto. This is something that occurs when ice on Mars turns into vapour and leaves a depression on the surface of the planet.

The ESA explained the angle's as an aureole, known as a circle of light around the head that represents holiness, is in fact a Martian "impact crater, created as a body from space flew inwards to collide with Mars’ crust."