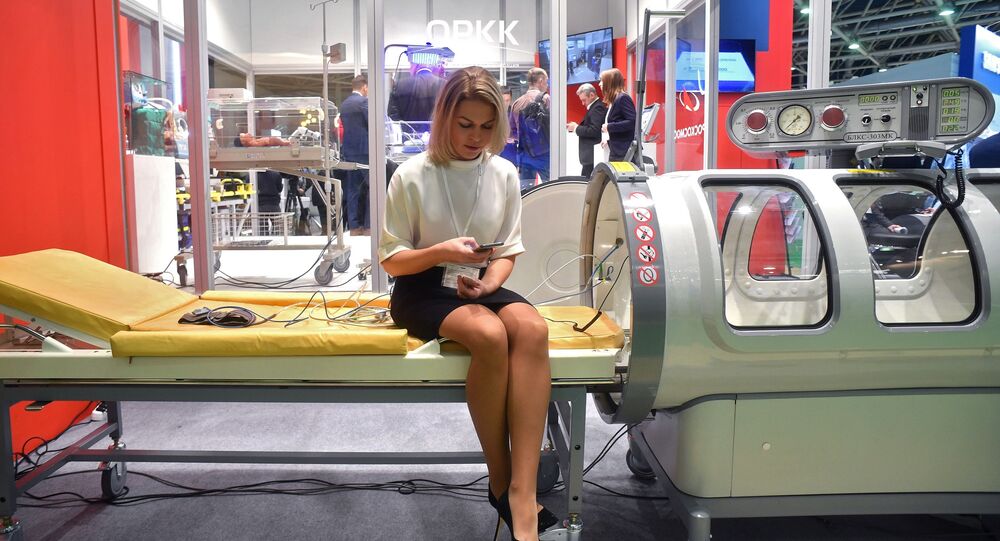 Previously, the same group of researchers pointed to the benefits of oxygen therapy for the human brain, reporting significant improvements to cognitive function and the functions of brain tissue in a control group of elderly volunteers.

A group of Israeli researchers appear to have stumbled upon something akin to the Holy Grail, finding a way to take the human body “backwards in time", not only slowing ageing but literally reversing its effects.

Speaking to The Jerusalem Post, Dr Shai Efrati of the Shamir Medical Center in Be’er Ya’akov, explained that a control group of healthy adults aged 65 and above experienced a reversal of the ageing process when placed in a pressurised chamber and given pure oxygen for 90 minutes a day, five days a week over a three-month period.

“We are not [just] slowing the decline – we are going backwards in time,” Dr Efrati told the paper, noting that the cellular-level changes observed in the trial group’s bodies were equivalent to what they would have been a quarter of a century earlier.

Efrati, who is also an associate professor of medicine at the Sackler Faculty of Medicine and the Sagol School of Neuroscience at Tel Aviv University, says that although the long-term effects of the therapy still need to be determined in follow-up checks, the science suggests that oxygen therapy really does have the potential to reverse ageing and extend lives.

“We know that people with shorter telomeres die earlier, so it makes sense,” he said, referring to the caps at the end of each strand of DNA which protect our chromosomes from damage during replication. As cells replicate, chromosomes’ telomeres become shorter and shorter, leading to ageing.

© NASA
Earlier Universe Existed and Is Still Observable, Nobel Prize Winner Sir Roger Penrose Says
Telomeres were first discovered by Soviet biologist Alexei Olovnikov in the early Seventies, who in turn put forth the telomere hypothesis of ageing and postulated that the shortening of telomeres is associated with cell malfunction, leading to the prevalence of certain age-related disabilities and illnesses, including cancers.

The study from Efrati and co-written by more than a dozen other Israeli doctors, neuroscientists, radiologists and researchers and published in Aging, a peer-reviewed journal, observed 35 healthy pension-age adults, subjecting them to hyperbaric oxygen therapy with an oxygenation rate of 100 percent and environmental pressure above one absolute atmosphere to enhance the amount of O2 absorbed by the body’s tissues.

The 90-minute sessions included 20-minute intervals in which study participants were asked to remove their masks for five minutes at a time to bring oxygen levels back to normal, which at the cellular level was interpreted as a lack of oxygen, which Efrati speculates is what helped to cause cellular regeneration.

In his interview with JP, Efrati warned people not to try his experiment at home. “There is a lot of junk out there,” he said, referring to many commercially available so-called hyperbaric tools. “This is not what is being used in the studies, it is not effective – and moreover, it could be dangerous,” he stressed.

Ultimately, the doctor suggested that although more research needs to be done, his team’s work offers the first proof at the cellular level that ageing can be reversed, adding that it “gives hope and opens the door for a lot of young scientists to target ageing as a reversible disease.”

© CC0 / Pixabay
Next Stop, Fhloston Paradise? Astronomers List Two Dozen Planets Which May Be Even Better Than Earth
The concept of hyperbaric medicine has been around for centuries, its first documented use taking place in 1662 by a scientist in Britain. Hyperbaric chambers became a fad among the wealthy of Europe in the late 19th century, and were first used as a treatment for decompression sickness in the Thirties. Public interest in hyperbaric medicine grew in the Fifties and Sixties as a therapeutic aid for heart surgery, an inhibitor to certain diseases, and a treatment for carbon monoxide poisoning. Hyperbaric chambers would eventually come to be used in hospitals, by navies, professional diving organisations and dedicated recompression facilities, and marketed with various levels of success for home use to the wealthy. Nations including Russia and China have decades of experience in the use of hyperbaric oxygen therapy to help treat dozens of diseases.
© Sputnik / Валерий Генде-Роте
Scientists carry out research in hyperbaric oxygenation at the Clinical and Experimental Surgery Research Institute of the Soviet Ministry of Health, 1975.
...
Reddit
Google+
Blogger
Pinterest
StumbleUpon
Telegram
WhatsApp
4224