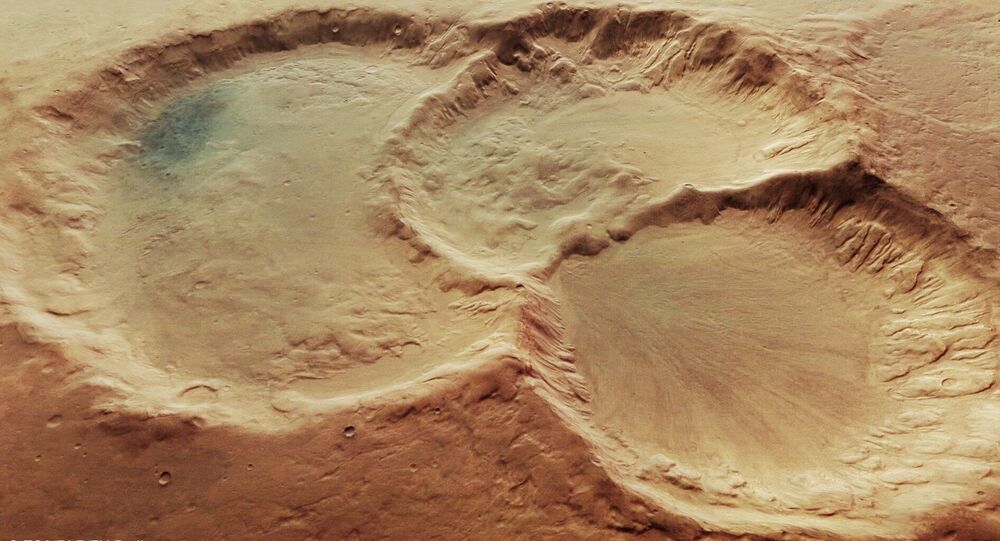 The craters are located on the Red Planet's southern hemisphere, in an area called Noachis Terra. During the Noachian era this region was constantly hit by asteroids and comets. Scientists say these craters are like a time-machine that allows them to travel back to the past and study Mars.

The European Space Agency's (ESA) Mars Express mission has stumbled on a bizarre sighting on the Red Planet – a triplet of craters overlapping each other. According to ESA, the craters, which the space agency described as "particularly unusual", were formed during the very earliest days of the Solar System.

ESA offered two explanations for how the bizarre craters appeared on there. According to the first hypothesis, the Red Planet was struck by three celestial bodies that accidentally landed on the same spot. According to the second hypothesis, Mars was hit by one celestial body that subsequently broke into three pieces before colliding with the planet. ESA said this theory implies that during its early days Mars had a far denser atmosphere that was hard to penetrate.

"This points towards an early Mars that was far warmer and wetter than the cold, arid world we see today. Observations from numerous missions are supporting this view and returning evidence that water once flowed across the Red Planet in large amounts, revealing features such as old river valley networks and large lake basins thought to have formed in the Noachian period", the space agency said in a statement.

ESA said the smallest crater measures 28 kilometres (17 miles) across, while the largest is 45 kilometres (27 miles). According to the space agency, there is evidence that the craters contain ice. The smallest crater has marks that "are typically created as ice and debris creep across a surface". Like other ancient craters discovered on Mars, the trio shows signs of erosion and have been filled with sediment since their formation.

© CC0
Extraterrestrial Compounds Were Found in Meteorite That Landed on Earth in 2018, Claims New Study