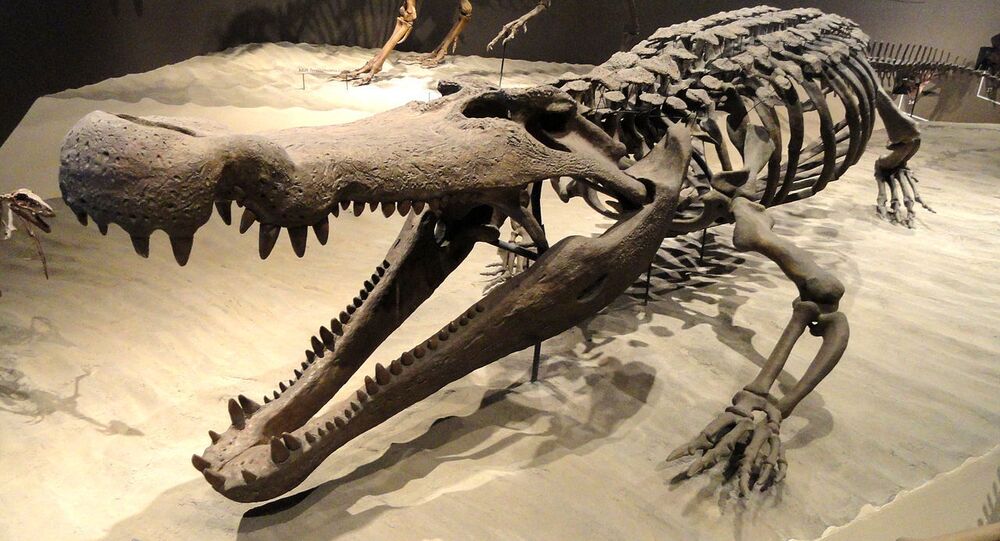 Scientists say Deinosuchus, whose length reached up to 33 feet (10 metres), resembled alligators. It had a long and broad snout that was inflated around its nose. One detail has baffled researchers, however: the gigantic creature had two large holes on its snout in front of its nose. Scientists admit they don’t know the purpose of these cavities.

A new study has confirmed that Deinosuchus – terror crocodile in Greek – had teeth the size of bananas and could even take down dinosaurs. The study was conducted in 2018 by scientists from the University of Iowa. The findings were published on 29 July in the Journal of Vertebrate Paleontology.

Scientists say there were three species of Deinosuchus. The first two – Deinosuchus hatcheri and Deinosuchus riograndensis – lived in western North America, ranging from Montana to Northern Mexico. The third one – Deinosuchus schwimmeri – lived along the coastal plains from New Jersey to Mississippi.

"It was a strange animal. It shows that crocodylians are not 'living fossils' that haven't changed since the age of dinosaurs. They've evolved just as dynamically as any other group", said Professor Christopher Brochu, co-author of the study.

The researchers say Deinosuchus was the biggest predator in its ecosystem, surpassing dinosaurs. The humongous crocodilian also preyed on these creatures.

"Deinosuchus was a giant that must have terrorised dinosaurs that came to the water's edge to drink. Until now, the complete animal was unknown. These new specimens we've examined reveal a bizarre, monstrous predator with teeth the size of bananas", said Dr Cossette, co-author of the study.

The scientists say Deinosuchus disappeared before the Cretaceous-Paleogene extinction event, which wiped out three quarters of the species on Earth, including the dinosaurs. The reason why the "terrible crocodile" became extinct is unknown. Researchers called on others to conduct further studies to establish the reason as well as find the purpose of the two large holes on Deinosuchus’ snout, which baffled the scientists.

"These holes are unique to Deinosuchus and we do not know what they were for, further research down the line will hopefully help us unpick this mystery and we can learn further about this incredible creature", said Dr Cossette.