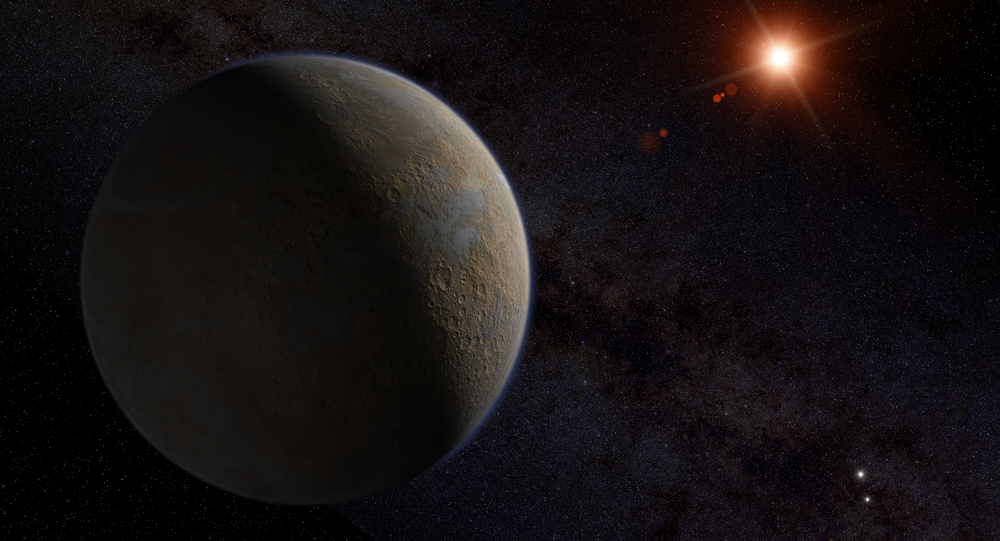 Fresh observations have revisited the rather dim red dwarf star, Proxima b, orbiting roughly in the middle of the habitable zone around the star Proxima Centauri, that was first studied by a group of astronomers using the High Accuracy Radial-velocity Planet Searcher (HARPS) at the European Southern Observatory at La Silla, Chile.

The existence of a planet the size of Earth, orbiting the closest star to the Sun, Proxima Centauri, has been confirmed by a spate of recent observations carried out by an international team of scientists.

According to results of the research, that involved scientists from the University of Geneva (UNIGE), and findings of which were published in Astronomy & Astrophysics, the planet - Proxima b - has a mass of 1.17 Earth masses and is situated in the habitable zone of its star, Proxima Centauri, which it takes 11.2 days to orbit.

© NASA
An artist's impression of the view from Proxima Centarui b, a newly discovered Earth-sized planet just four light-years away. It is unclear if there is intelligent life in the universe, but searches continue to find Earth-sized planets in the habitable zones of their respective stars

“Confirming the existence of Proxima b was an important task, and it’s one of the most interesting planets known in the solar neighborhood,” said Alejandro Suarez Mascareño, lead author of the research, in a statement.

Using state-of-the-art astronomical instruments, which were unavailable when the rather dim red dwarf star was first reported in an issue of the journal Nature on 26 August 2016 by a group of astronomers using the High Accuracy Radial-velocity Planet Searcher (HARPS) at the European Southern Observatory at La Silla, Chile, the team found that Proxima b is 1.17 times the mass of Earth, smaller than the older estimate of 1.3 times.

The scientists were able to revisit the planet with ESPRESSO (Echelle Spectrograph for Rocky Exoplanet- and Stable Spectroscopic Observations). This is a powerful, third-generation, fiber fed, spectrograph mounted on the European Southern Observatory's Very Large Telescope (VLT) in Chile.

​The unit, which first began operating in September 2016, boasts three times the precision of its predecessor, HARPS.

“We were already very happy with the performance of HARPS, which has been responsible for discovering hundreds of exoplanets over the last 17 years,” said Francesco Pepe, astronomy professor at the University of Geneva, Switzerland, and leader of ESPRESSO.

Determining the mass of such a distant planet as Poxima b with such precision is “completely unheard of,” enthused 2019 Nobel Prizer winner Michel Mayor, a Swiss astrophysicist and professor emeritus at the University of Geneva's Department of Astronomy. Mayor's work had focused on improving instrumentation for radial velocity measurements to improve detecting exoplanets and measuring their properties.

Fresh discoveries regarding Proxima b have generated a good deal of excitement among astronomers as offering the potential of finding alien life.

Athough Proxima b orbits its star at such a close distance, it receives about the same amount of energy from it that Earth does from the Sun.

On the down side, the star Proxima Centauri tends to bombard planets in its vicinity with an array of X rays. Accordingly, Proxima b receives about 400 times the amount of such rays received by Earth from the Sun.

Co-author of the new research, Christophe Lovis, who worked on ESPRESSO, wondered in a statement whether the planet might have an atmosphere that protects it from these deadly rays.

However, looking to the future, he expressed hope that a successor to ESPRESSO spectrograph, “RISTRETTO”, which is currently being developed, might help answer these questions.