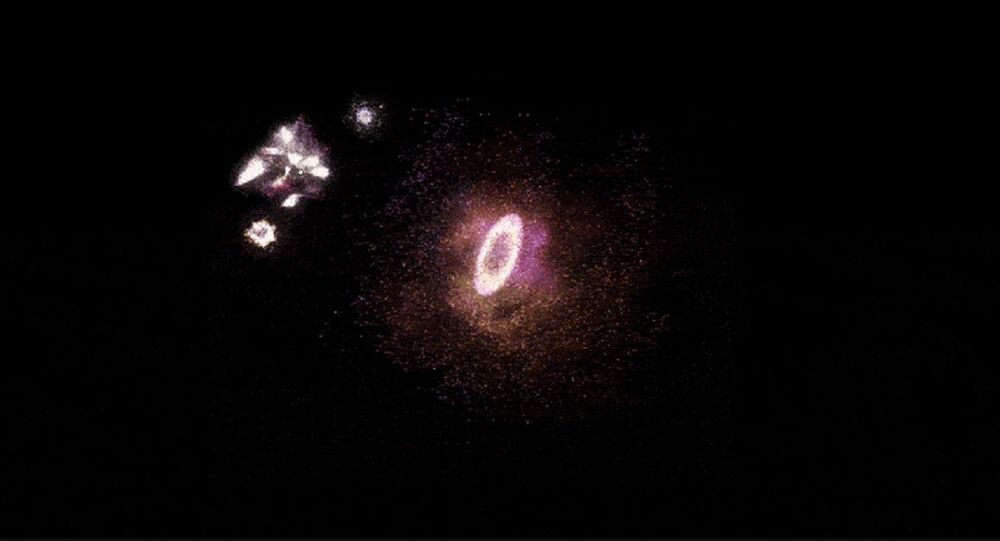 The galaxy's peculiar shape is apparently a product of a collision with some sort of object that literally punched a hole in the middle of the former, billions of years ago.

Using the Hubble Space Telescope and the W.M. Keck Observatory in Hawaii, scientists were able to obtain an image of a galaxy located some 11 billion light years away, whose light has reached our planet only now, Live Science reports.

According to the media outlet, the galaxy in question, designated R5519, is one of the so called "collisional ring galaxies" and is essentially comprised of a ring of stars with a hole in the middle.

"It is making stars at a rate 50 times greater than the Milky Way," said lead researcher Tiantian Yuan, an astronomer at Swinburne University of Technology in Australia. "Most of that activity is taking place on its ring – so it truly is a ring of fire."

​The researchers note that while most of the ring-shaped galaxies in our universe are a product of internal processes, R5519 was apparently formed when some object punched through that galaxy, effectively leaving a hole in the middle.

"This discovery is an indication that disk assembly in spiral galaxies occurred over a more extended period than previously thought," said Kenneth Freeman, astronomer at Australian National University and co-author of the study.

Since that collision likely took place about 3 billion years after the Big Bang, this new discovery may alter astronomers' perception of the early history of the universe, the media outlet points out.