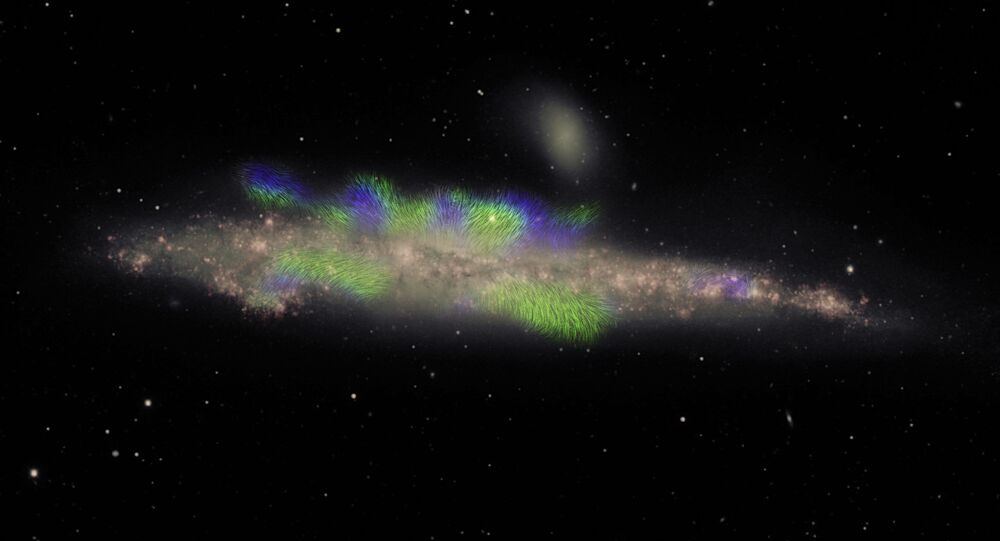 A new image of NGC 4631, more popularly known as the "Whale Galaxy," shows ropes of magnetic filaments extending above and below the disk of the galaxy.

The filaments - massive, thread-like structures - which show up in green and blue in the picture, reach far into the galaxy's halo of gas and dust, with green filaments having a magnetic field pointing away from Earth while the blue ones have a field pointing toward our planet.

The researchers behind the image are still trying to understand how the galaxy's magnetic structure works, according to a statement released with the image. They would like to know how common these sorts of magnetic fields are in galactic halos and what shapes the fields take. Studying these fields might help astronomers understand how galaxies develop magnetic fields, and whether fluid motion in a galaxy, which scientists call the dynamo effect, generates the magnetic field.

The image was taken with the Karl G. Jansky Very Large Array, a telescope operated by the National Radio Astronomy Observatory (NRAO).

"We are a little bit like the blind men and the elephant, since each time we look at the galaxy in a different way, we reach a different conclusion about its nature," co-author Richard Henriksen, an astrophysicist at Queen's University in Canada, said in a NRAO statement.

"However, we seem to have one of those rare occasions where a classical theory, about magnetic generators called dynamos, predicted the observations of NGC 4631 quite well," he added. "Our dynamo model produces spiraling magnetic fields in the halo that are a continuation of the normal spiral arms in the galaxy's disc."

The "Whale Galaxy" is about 25 million light-years away from Earth in the constellation Canes Venatici. It is 80,000 light-years across and has a small companion (NGC 4627). The image also shows another small elliptical galaxy, though the researchers didn’t provide any additional information about it in the statement.