On November 5, for the first time in 40 years, a pristine lunar rock sample was opened by scientists at NASA, the US space agency, in order to test new tools in advance of the upcoming Artemis missions.

NASA scientists have opened one of two samples collected during the Apollo 17 manned moon mission in order to test out new technology on them for the Apollo Next-Generation Sample Analysis (ANGSA) initiative. 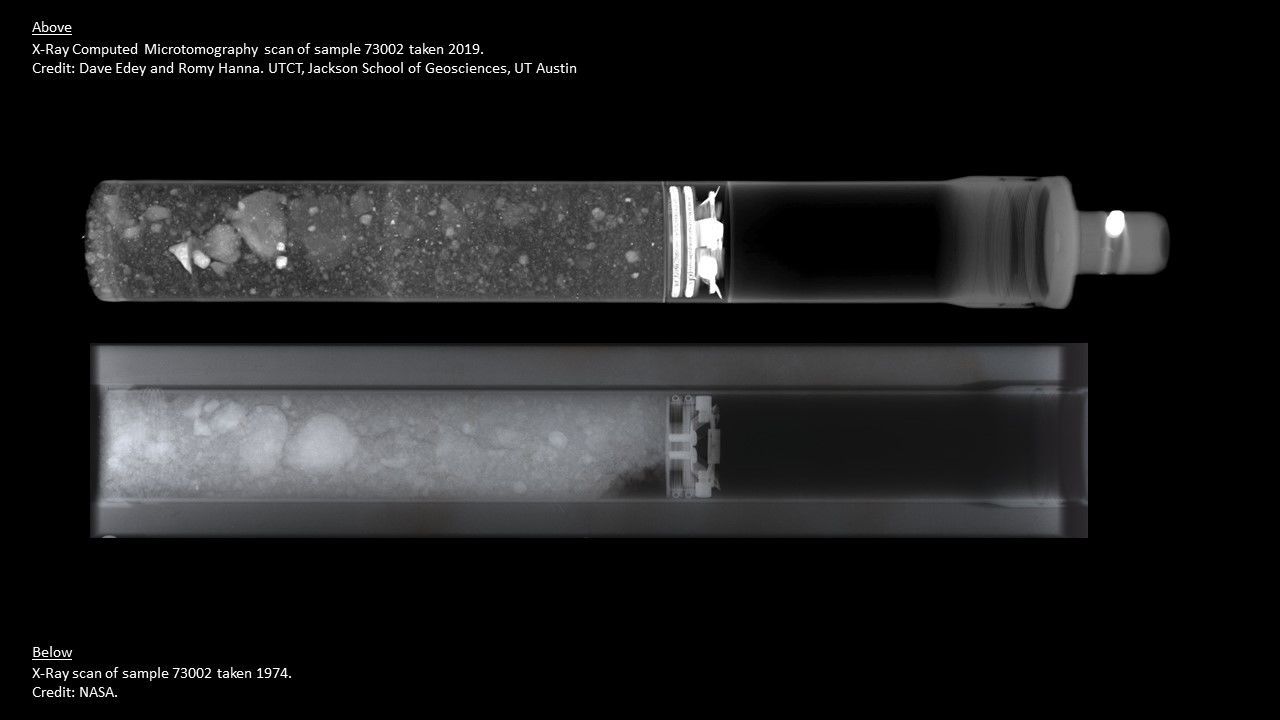 © NASA . NASA handout
The bottom scan of sample 73002 was taken using radiograph technology in 1974 by NASA. The X-Ray Computed Microtomography scan above was taken in 2019 at the University of Texas at Austin. This is one example of the technological developments that are enabling a new generation to conduct new science on Apollo samples.

The samples were collected 47 years ago during the final manned mission to the moon, but with NASA planning on returning to Earth’s only natural satellite in the coming years, it’s necessary to sharpen scientists’ skills in examining moon materials with new methods, including non-destructive 3D imaging, mass spectrometry and ultra-high resolution microtomy, which weren’t available in 1972 when the rocks were brought back to Earth.

"We are able to make measurements today that were just not possible during the years of the Apollo program," Dr. Sarah Noble, ANGSA program scientist at NASA Headquarters in Washington, DC, said in a November 7 press release that noted the procedure happened on November 5. "The analysis of these samples will maximize the science return from Apollo, as well as enable a new generation of scientists and curators to refine their techniques and help prepare future explorers for lunar missions anticipated in the 2020s and beyond."

The opened sample, 73002, along with sample 73001, which will be opened in January, contained dust and rock collected in a 4-centimeter-wide, 2-foot-long tube. Called a “regolith,” the sample came from the rim of Lara Crater, a formation called the Lee-Lincoln Scarp, Space.com noted.

NASA noted the second sample will only be opened once scientists are sure they can capture the moon gases inside the container once it’s unsealed.

"Opening these samples now will enable new scientific discoveries about the moon and will allow a new generation of scientists to refine their techniques to better study future samples returned by Artemis astronauts," Francis McCubbin, NASA's astromaterials curator at the Johnson Space Center where most of the lunar samples are stored, said in the press release.

"Our scientific technologies have vastly improved in the past 50 years, and scientists have an opportunity to analyze these samples in ways not previously possible,” McCubbin said.

In 2017, US President Donald Trump re-established the National Space Council, placing Vice President Mike Pence at the helm and directing it to prepare for manned missions to the moon, as well as Mars. This past March, NASA announced its self-imposed deadline of 2024 for a moon mission.

The new moon mission program, dubbed Artemis, after the Greek goddess who is both the goddess of the moon and Apollo’s twin sister, will transport astronauts on the Orion spacecraft, which Pence unveiled the design for in July. The spacesuits for the crew of at least four astronauts were revealed last month.