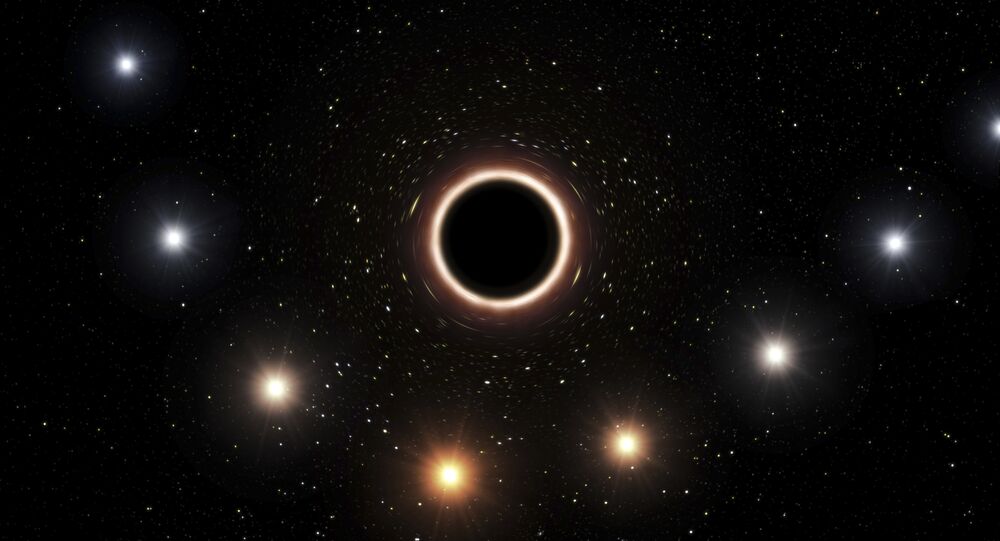 The data evidence that pointed to the leviathan black hole was obtained from NASA’s Chandra X-ray Observatory that focused its lenses on a quasar named PSO167-13 – a tiny area around the afore-mentioned “greedy” high gravitation zone.

Astronomers from NASA have arguably found the most distant cloaked black hole ever seen by anyone on Earth, with the mammoth zone of extremely strong gravitation being the first to have been enveloped with gas at such an early time in the history of the cosmos, the US space agency reported on its website.

As NASA stated, supermassive black holes typically expand by taking in surrounding matter, and such rapid growth generates large amounts of radiation accumulated in a tiny region around the black hole, a “quasar”.

It is observations of a quasar named PSO167-13, which was first mapped by the Hawaii-based Pan-STARRS optical-light telescope, that helped lead astronomers to the mysterious “cloaked” black hole. The previous surveys, however, focused on solely locating unobscured black holes, because the radiation in the region is suppressed by thin clouds of dust and gas alike.

Initially, PSO167-13 was expected to be unobscured as well, but one of the researchers, Fabio Vito, a CAS-CONICYT fellow at the Pontificia Universidad Católica de Chile, put this idea to the test by leveraging Chandra to study PSO167-13 and nine other quasars.

The 16 hours of observations led the research team to detect only three X-ray light photons, which all appeared to have rather high energies. Considering that low-energy X-rays are more absorbable than higher energy ones, it’s possible that the quasar is highly shrouded by gas, enabling only high-energy X-rays to be detected.

Earlier, astronomers discovered an “ultra-massive” black hole - one of the most gargantuan ever mapped. A team of German researchers believe that a monster with a mass 40 billion times greater than our sun is hiding at the centre of a galaxy called Holmberg 15A.

Separately, a new search mechanism was proposed by Japanese scientists to detect a whopping 100,000,000 “isolated black holes” that are likely lurking somewhere in the galaxy, and potentially much closer than the one thought to be nearest to our planet, located less than 3,000 lightyears away from Earth.

In their paper, the team said these stealthy leviathans emit what they referred to as “synchrotron radiation” during “outflows” produced as they suck up gas – a signal that may help pinpoint such “greedy” cosmic areas.