Scientists Are Puzzled by Unknown Substance Punching Holes in Our Galaxy

A mysterious "dark impactor" is blasting holes in the Milky Way and no telescope on Earth is able to detect what exactly this “dense bullet of something" is.

The evidence of the impactor was discovered by Ana Bonaca, a researcher at the Harvard-Smithsonian Center for Astrophysics. At the conference of the American Physical Society in Denver she presented a series of holes in our galaxy's longest stellar stream, GD-1. Stellar streams are lines of stars moving together across galaxies, which often originate in smaller blobs of stars that have collided with the galaxy in question.

Under normal conditions, the stream should be more or less a single line, stretched out by our galaxy's gravity, Bonaca said in her presentation. The only gap in a stream is usually at the point where the original globular cluster was before its stars drifted away in two directions. However, Bonaca showed that GD-1 actually has a second gap. And that gap has a ragged edge — a region Bonaca called GD-1's "spur" — as if something huge plunged through the stream not long ago, dragging stars in its wake with its enormous gravity, like it was hit with “a dense bullet of something."

"We can't map [the impactor] to any luminous object that we have observed. It's much more massive than a star… Something like a million times the mass of the sun. So there are just no stars of that mass. We can rule that out. And if it were a black hole, it would be a supermassive black hole of the kind we find at the centre of our own galaxy," Bonaca told Live Science. 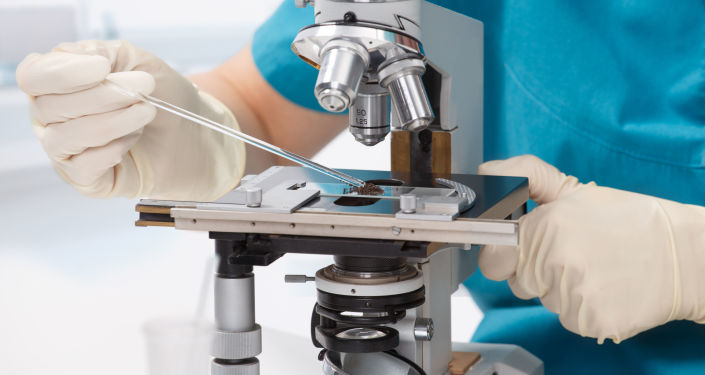 © Fotolia / Capifrutta
Russian, Italian Scholars Develop Ultrafast Microscope for Dark Matter Research
One of the possibilities, according to the researcher, is that this gap shows the existence of a second supermassive black hole in our galaxy. However, no other signs of it, like flares or radiation from its accretion disk, have been found.

If not a black hole, another possibility is that it is a big clump of dark matter. But that doesn't mean the object is definitely, 100%, absolutely made of dark matter, Bonaca explained.

"It could be that it's a luminous object that went away somewhere, and it's hiding somewhere in the galaxy," she added.

It is hard to tell for sure in part because the researchers don't know how fast it was moving during the impact so it is impossible to tell where the object could have ended up.

This dense ball of unseen something plunging through our Milky Way offers physicists a new scrap of evidence that dark matter might be real, but as for now researchers cannot determine what exactly dark matter is. There are lots of different opinions as to what it's made of, but none of the efforts to directly detect dark matter on Earth have yet worked. If proved, this object could confirm that dark matter is really "clumpy," as most theories about its behavior predict that is concentrated in irregular chunks distributed roughly across galaxies — much like the luminous matter we see concentrated in stars and nebulae.

Bonaca buttressed her data with observations from the Multi Mirror Telescope in Arizona, which showed which stars were moving toward Earth, and which were moving away. That helped distinguish between stars that were really moving with GD-1, and those that just sat next to it in Earth's sky. That effort produced the most precise image ever of GD-1, which revealed the second gap, the spur, and a previously unseen region of the stellar stream. The researcher plans to do more mapping projects to reveal other regions of the sky where something unseen seems to be making holes in the galaxy and, eventually, detect this “dark matter bullet” across the whole Milky Way.