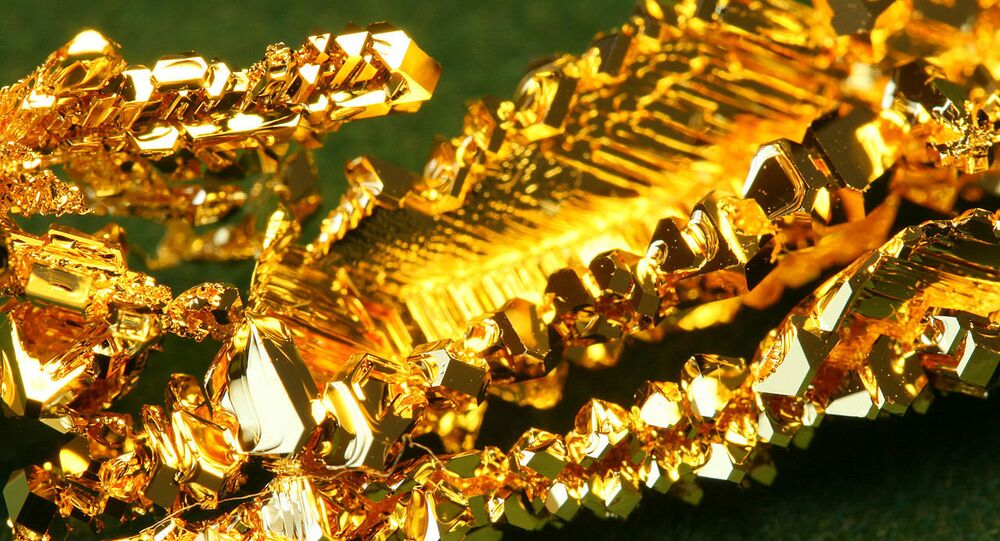 There were earlier quite a few attempts to devise “flat” chemical structures from metals, but the structure of gold, for instance, was far too solid to do this. However, Russian physicists’ latest efforts appear to have yielded fruit after they discovered that molybdenum sulphites would be more active with regard to the precious metal’s atoms.

Russian scientists from the Moscow Institute of Physics and Technology have arrived at the conclusion that gold can be rendered as any bidimensional structure by means of attaching its atoms to a special base made of a sulphur or molybdenum compound, with the finding, written about in the journal Advanced Material Interfaces, expected to be used in the creation of cutting-edge transparent electronic devices.

“We are expecting the sphere of quasi-bidimensional materials to make huge leaps forward. In the not so distant past, they were not available even to scientists. Yet, today, one can indeed talk about huge prospects of the technology that we have proposed that can be used to develop flexible and transparent electronics. We’d love to see it roll off the assembly lines in the near future, and we are working on it”, noted Alexey Arsenin, the director of the Institute’s Centre for Photonics and Bidimensional Materials.

Chemists, physicists, and other representative of natural sciences have long believed that exclusively completely “three-dimensional” materials can exist in nature – ones that have a length, width and height.

These conceptions started to change only in the early 1950s, when theoretical physicists proved that “flat” atomic structures could likewise be found in the world. After a long string of failed efforts to design such a material, the mission was successfully accomplished by a pair of Russian-British scientists in 2004, Andrey Game and Konstantin Novosyolov.

They discovered a simple, but perfectly smart and effective way to produce graphene, a “flat” sulphur form, by playing with graphite bits while they analysed their electric properties.

In the following 15 years, the scientists came up with dozens of such structures, some of which appeared to be even more curious than graphene, as they consist of atoms from not one, but two or even three different components – for instance, “the flat magnets” made of chrome and iodine compounds, as well as rare metal and silicon compounds.

According to the Institute’s press service, the success was, however, not full-fledged, as the physicists failed for several consecutive years to arrive at “flat” materials derived from pure metals, as the latter do not normally segregate, rendering it impossible to rip away a layer of atoms using the Game and Novosyolov technique. They persisted in their efforts using molybdenum sulphite, in the hope that sulphur would merge more actively with atoms of gold than carbon.

The scientists have expressed hopes that their brainchild will be put to use not only in the build-up of high-tech transparent devices, but will also help neurophysiologists create exceptionally accurate and compact  selections of electrodes that would make it possible to plug in artificial  limbs  and other “gadgets” to human and animal brains.